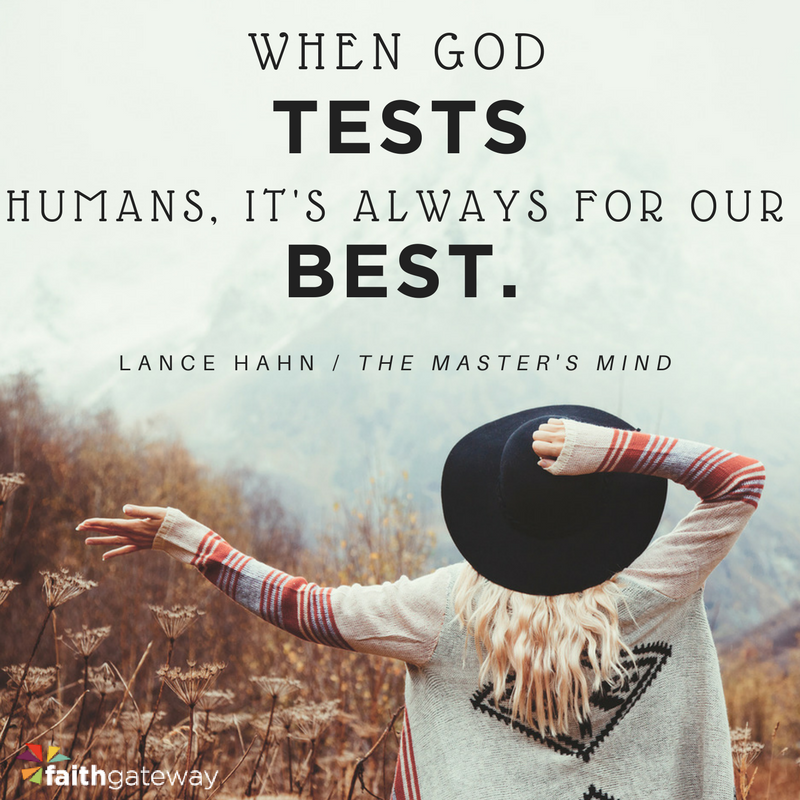 God allows temptation and trial because they can be good for us.

Temptation is a lure to sin. God doesn’t do that, but He does test.

Blessed is the man who remains steadfast under trial, for when he has stood the test he will receive the crown of life, which God has promised to those who love him. Let no one say when he is tempted, “I am being tempted by God,” for God cannot be tempted with evil, and he himself tempts no one. But each person is tempted when he is lured and enticed by his own desire. Then desire when it has conceived gives birth to sin, and sin when it is fully grown brings forth death. Do not be deceived, my beloved brothers. Every good gift and every perfect gift is from above, coming down from the Father of lights with whom there is no variation or shadow due to change. — James 1:12-17

Remember, sin is that which is anti-God. Therefore, God will never lead someone to sin; doing so goes against His very nature. However,

He will test believers by putting them through difficult training that will both strengthen them and reveal their current conditions (like a refiner’s fire).

Both situations involve challenge. How do we know then if it’s a temptation or a trial? We don’t — that’s God’s business. In either situation, we are to remain faithful to the Lord and believe He will reveal the reason in due time. If we are obedient in a temptation, we will resist the Devil, and he will flee from us. If we’re obedient in a trial, we will emerge stronger than ever. We must believe by faith that God has our best interests in mind and not doubt His love or provision regardless of the circumstances we are going through.

Intent means everything. If I as a leader demanded that my followers run until they threw up, forced them to work for me in grueling circumstances to the detriment of their bodies, and humiliated them continually to destroy their hearts, I would be a monster. If I did it for their best interests, I would be a drill instructor. If I rubbed acid on someone’s face so that it bubbled and hurt, and the person had to take meds for weeks just to deal with the burns I created, I would be a devil. If I did it because the person asked me to, I would be a dermatologist performing a chemical peel. If I dropped heavy items on you that could crush you, only to force you to catch them and push them back up, I would be a tormentor. If I did it for the good of your body, I would be a personal trainer in the gym. If I withheld your normal food for days on end and then only gave you small amounts of berries and vegetables even though there was a bounty of food around, you would call me selfish. If I did it for your health, I’d be a nutritionist helping you with a fast or cleanse. As you can see, it’s not the brutal situation that makes something good or bad, but the motive behind it. That’s also true of troubles in our lives.

We can know He has a valuable reason for the trials we are facing.

Satan seeks to harm. He wants to take us down. He wants us to turn our back on God1 and sin.2 Satan and his demons want to rip our faces off; the only reason they can’t do that is because God holds the leash. Why doesn’t God stop them completely and keep us safe? Because safe isn’t the pathway to either strength or revelation.

God’s intention is always for believers to emerge from a trial better than when they started, either in strength or in knowledge. He promises that every situation will have a way out — an escape hatch that can be utilized through obedience.3 The way out may not be easy, and we may not always take it, but its presence means that we will never be forced to sin. God will never do that.

We will experience temptation, but let me reiterate: temptation isn’t sin.

As we’ve seen, the Bible says that Jesus was tempted yet was without sin.4 It also says,

This means that difficult, messy things are not always sin. Evil may surround us, but we can remain untouched internally, where it matters. Christians deal with too much self-condemnation for being tempted. The reality is that temptation is normal. It doesn’t mean we are bad people, only that we are human.

Too many times we think that because we struggle with something, we may as well just cave in. That’s a lie from the enemy. Of course we want to give in; that’s what temptation is. But not giving in is what resistance is.

When God tests humans, it’s always for our best. It was not an accident that the Tree of the Knowledge of Good and Evil was in the middle of the garden of Eden. God could have put it in the far corner, but He placed it squarely in the center so that Adam and Eve would have to walk past it no matter where they were headed. He was helping them develop patterns of obedience, which revealed their love for Him for the supernatural world to see. Did it cost Him? Yes, of course it did. God lost His beautiful intimacy with His brand-new creation. He lost the connection that was the very purpose for mankind’s design. But God used even Adam and Eve’s failure to demonstrate the most powerful act of love known to mankind: redemption.5

An often forgotten verse from the end of Christ’s desert temptation is found in Luke 4:14, and it speaks volumes:

And Jesus returned in the power of the Spirit to Galilee.

Jesus came out of the desert trial more powerful than He was before. He underwent temptations at the beginning of His public ministry so that His power would be present for His work. Obedience results in power. When we emerge from a trial successfully, not only is God glorified, but also we are strengthened in confidence and in the certainty of God’s will for our lives. The Holy Spirit comes in and fills that empty spot (where we empty ourselves of our pride, our needs, our cravings, or our agendas) with Himself, and we are empowered even more. God brings trials to our lives for this outcome.

Excerpted with permission from The Master’s Mind by Lance Hahn, copyright Lance Hahn.

Are you being tempted? Remember that God is not tempting you and He always provides a way out! Are you in a trial? Remember that God is allowing this for your good. You will come through this and you will be all the stronger for having resisted! Come share your thoughts with us on our blog. We want to hear from you. ~ Devotionals Daily