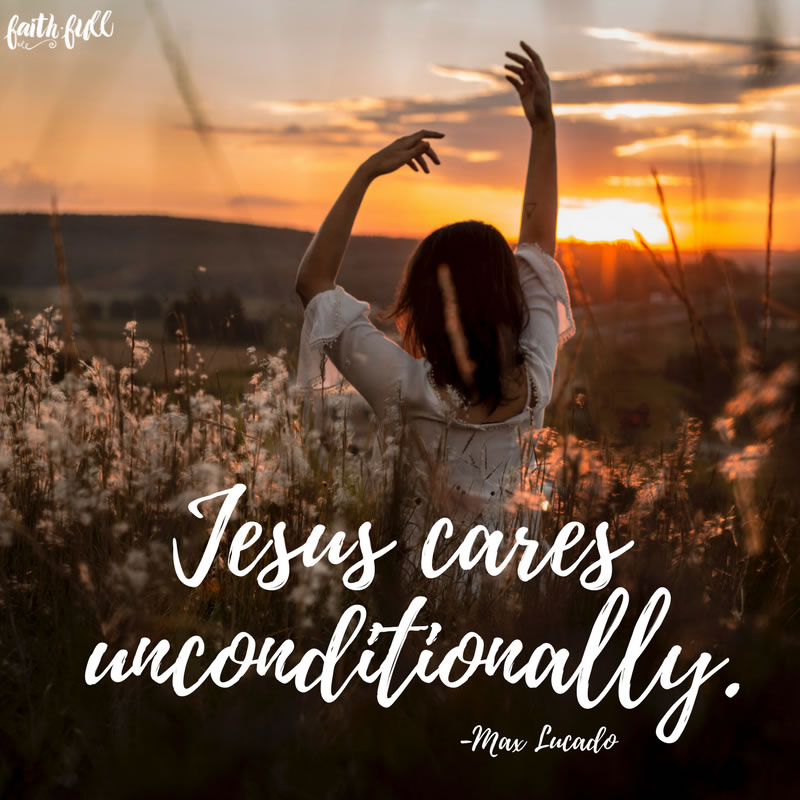 Editor’s note: Max Lucado speaks straight to our hearts as he opens God’s Word in a story-telling, homespun, easy to understand, and heart-provoking way. Enjoy this excerpt of God Came Near which shares Jesus’ incredible love for women.

The mourners didn’t cause Him to stop. Nor did the large crowd, or even the body of the dead man on the stretcher. It was the woman — the look on her face and the redness in her eyes. He knew immediately what was happening. It was her son who was being carried out, her only son.

And if anyone knows the pain that comes from losing your only son, God does.

So He did it; He went into action. “Don’t cry” He told the mother. “Arise!” He told the boy. The dead man spoke, the devil ran, and the people were reminded of this truth: for those who know the Author of Life, death is nothing more than Satan’s dead-man’s-bluff.1

His plan was to catch a few winks while the boys went to town for food. And what better place to rest than a well at noon. No one comes for water at this hour. So He sat down, stretched His arms, and leaned against the wall of the well. But His nap was soon interrupted. He opened one eye just wide enough to see her trudging up the trail with a heavy jar on her shoulder. Behind her came half a dozen kids, each one looking like a different daddy.

She didn’t have to say a word. Her life story was written in the wrinkles on her face. The wounds of five broken romances were gaping and festered. Each man who had left her had taken a piece of her heart. Now she wasn’t sure there was anything left.

“And the man you now live with won’t even give you his name.” Jesus said it for her. He understood her pain too well. Far more than five men had broken commitments to Him.

Silently the Divine Surgeon reached into His kit and pulled out a needle of faith and a thread of hope.

In the shade of Jacob’s well He stitched her wounded soul back together. “There will come a day…” He whispered.2

By the time she got to Jesus, she had nothing left. The doctors had taken her last dime. The diagnosis had stolen her last hope. And the hemorrhage had robbed her of her last drop of energy. She had no more money, no more friends, and no more options. With the end of her rope in one hand and a wing and a prayer in her heart, she shoved her way through the crowd.

When her hand touched His garment a transfusion occurred. He let it go out and she let it go in.

It didn’t bother Jesus that the woman came to Him as a last resort. To Him it mattered only that she came.

He knows that with some of us it takes a lot of reality to snap us to our senses, so He doesn’t keep a time clock. Those who scramble in at quitting time get the same wage as those who beat the morning whistle. I guess that’s what makes grace, grace.3

Three women. One bereaved. One rejected. One dying. All alone. Alone in the winter of life.

Though we don’t know what they looked like, it would be fair to assume they had passed the peak of their desirability. The only heads that turned as they walked down the street were heads shaking with pity. One of the three was widowed and childless; another had lost her innocence six bedrooms back; and the third was broke, desperate, and dying.

Had Jesus ignored them, who would have noticed? In a culture where women were only a grade or two above farm animals no one would’ve thought any less had He walked silently past the funeral or closed His eyes and leaned back against the well or ignored the tug on His robe. After all, they were only women!

Let them alone, Jesus, one could reason. Find someone with a bit of springtime about them.

By the world’s standards these three could give nothing in return. They’d served their purpose: borne their children, fed their families, pleased their men. Now it was time to push them out into the cold until they died, making room for the young and spotless.

That’s where Jesus found them. Shivering in the icy sleet of uselessness.

The raw winter of life.

Sound familiar? Sure it does. We have our own people of winter. People who for the lack of good looks or sufficient earning power wander around like porcupines at a picnic, unwanted and unapproachable.

Visit a high school sometime and look for the teenagers already feeling the chilly winds of rejection. They are easy to find. They’re the ones with acne, or greasy hair, or holes in their shoes; they sit alone at lunch and stay at home on weekends. They orbit around the class stars, longing for acceptance yet increasingly convinced they don’t deserve it.

Or try Miami Beach. I don’t mean the north beach where tourists pay $150 a day to get sunburned. I mean the south beach, a city delib- erately built for the exhausted. Watch them shuffle aged feet down the sidewalk. They have come to their burial ground. They have fulfilled their function and now fill their days with dominoes, dogs, and doctor visits. They fill their nights with dreams of the granddaughter who might come next Christmas. And though the Gold Coast is warm, in their souls blow the winds of winter.

Or consider the unborn. Every twenty seconds one is taken from the warmth of the womb and cast into the cold lake of selfishness. In spite of the clinical phrases used to make the act more palatable — “termination of pregnancy” rather than “abortion,” “fetus” instead of “unborn child,” “conceptus” as opposed to “baby” — the act is deplorable. The bottom line is still a denial of the inherent value of a human being.

The paragraphs could go on and on. Paragraphs about quadriplegics, AIDS victims, or the terminally ill. Single parents. Alcoholics. Divorcées. The blind. All are social outcasts. Lepers, mutations. All, to one degree or another, shunned by the “normal world.”

No, no one would have blamed Jesus for ignoring the three women. To have turned His head would have been much easier, less controversial, and not nearly as risky. But God, who made them, couldn’t do that. And we, who follow Him, can’t either.

Jesus doesn’t shun the outcasts the way the world does. He stops, looks, listens, cares, and responds. He loves unconditionally. You and I might feel like we’re at the end of our ropes, out of hope entirely, but Jesus is near. And He cares. Come share your thoughts with us on our blog. We want to hear from you! ~ Laurie McClure, Faith.Full