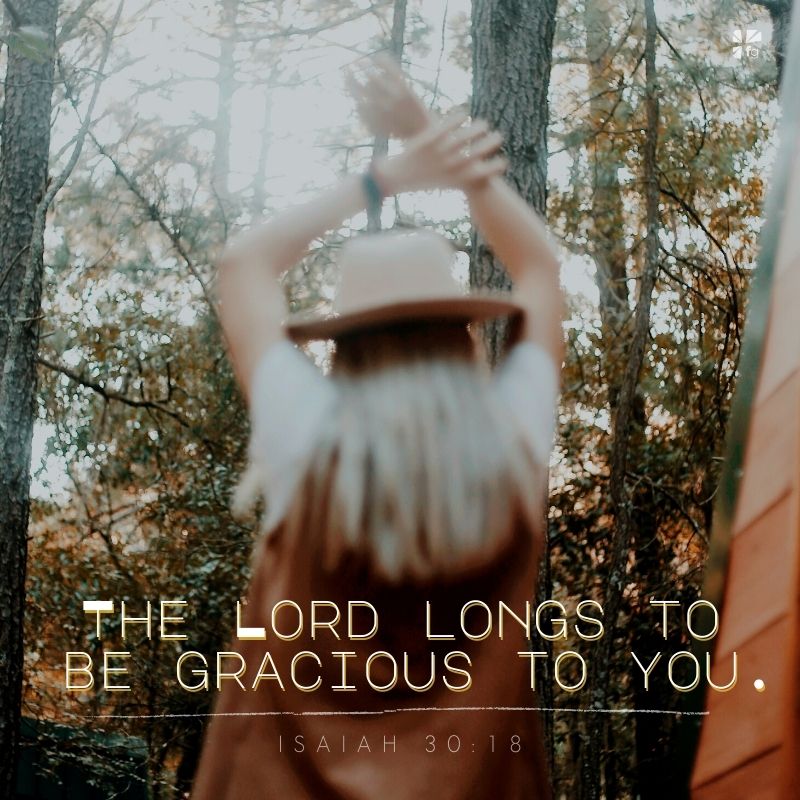 But here’s the catch: you can’t get yourself out.

Try as you may, you will never successfully pull yourself out of a pit. Not the kind the Word of God is talking about. Remember the number one characteristic of a pit? Mud and mire. The quicksand kind that gulp your feet whole. You’re stuck. As much as you’d like to, as self-sufficient as you’d like to be, as smug as it would make you, you can’t do this one alone. Somebody else has to come to your rescue. But there you have options.

The fact that we could actually see our deliverer could be a decisive advantage. Just to have an audible conversation would be great. To know someone really was listening would help. To see the look on a face or hear the tone in a voice. Now, to us, that’s real help.

But help alone is not what we’re talking about. God meant for people to offer one another a helping hand. The trouble comes when we insist upon someone equally human becoming our deliverer. Another person — rare though he may be — really can pull us out of a pit but, for the life of him, he can’t set us free.

Take Joseph, for instance. Maybe you remember that the first time Scripture mentions a pit, Joseph was in it. While he was kicking and screaming in the waterless bottom, his brothers looked up from their picnic lunch and

saw a caravan of Ishmaelites coming from Gilead. Their camels were loaded with spices, balm and myrrh, and they were on their way to take them down to Egypt. Judah said to his brothers, “What will we gain if we kill our brother and cover up his blood? Come, let’s sell him to the Ishmaelites and not lay our hands on him; after all, he is our brother, our own flesh and blood.” His brothers agreed. So when the Midianite merchants came by, his brothers pulled Joseph up out of the cistern and sold him for twenty shekels of silver to the Ishmaelites, who took him to Egypt. — Genesis 37:25-28

Agreed, getting sold into slavery was a far better option than starving to death in the bottom of the cistern. But a kind soul will give the brothers too much credit for their compassion without Psalm 105:18 to round out the picture. We’re told that the Ishmaelites “bruised his feet with shackles, his neck was put in irons.” Don’t forget, Joseph was only seventeen. Pampered and spoiled at that. He’d probably never even made up his pallet in the morning. Suddenly, at the drop of a head wrap, he was a slave in shackles heading who knows where.

Scripture leaves no doubt that the sovereignty of God was in full pendulum swing, directing every detail from Canaan to Egypt for the common good. Years passed, however, before Joseph began to grasp the work of his true Deliverer. In our relational parallel, if a man — or woman — pulls us out of the pit, solely assuming the role of deliverer, he or she will inadvertently sell us into slavery of one kind or another almost every time. Scripture records several instances when God heard the cries of His people and raised up a human deliverer for them instead of insisting, as He did at other times, that they look to Him alone. Each time Israel invariably returned to captivity.

Psalm 78 records a disturbing record of Israel’s cycle of defeat — as great a human tragedy as you’ll ever read:

Here’s the important part: “They did not believe in God or trust His deliverance” (Psalm 78:22, emphasis mine).

Though God raised up leaders like Moses and Joshua, the nation still eventually defaulted to its old pattern.

I know the feeling. I had a few great leaders along the way, too, but they couldn’t rewire my hard drive. I’d eventually default every time. Nothing is more futile or leaves us more fractured than trusting man to be our god. Sometimes we forget what a mistake this was the last time we did it. Time has a way of distorting our memories. That’s what happened to Israel. Not many years after the writer of Psalm 78 put pen to parchment, Israel found herself scrambling for help as she faced imminent takeover by the massive army of the Assyrians.

God could have thwarted the assault in a blink of His holy eye, but stayed His hand, awaiting their cry of repentance.

In repentance and rest is your salvation, in quietness and trust is your strength, but you would have none of it. — Isaiah 30:15

Been there too. Rather than humble themselves and do what was required for true protection and restoration, Israel preferred calling upon the Egyptians for protection. While history etched a stark warning, they slapped a coat of gloss over their past and decided Egypt wasn’t all that bad. Particularly when compared to the threatening Assyrians. They figured they’d ally with Egypt and she would deliver them. Isaiah 30 records God’s response:

“Woe to the obstinate children,” declares the Lord, “to those who carry out plans that are not Mine, forming an alliance, but not by my Spirit, heaping sin upon sin; who go down to Egypt without consulting Me; who look for help to Pharaoh’s protection, to Egypt’s shade for refuge. But Pharaoh’s protection will be to your shame, Egypt’s shade will bring you disgrace… everyone will be put to shame because of a people useless to them.” — Isaiah 30:1-3, Isaiah 30:5

Israel didn’t need Egypt. She needed God. At his best, man can make a mighty fine man, but he’s a useless god. Contrary to the serpent’s suggestion in the Garden, people simply can’t be divine. The higher the expectation we have for them, the further they’re going to fall. (And somehow, when it’s all over we feel disgraced. Embarrassed. Sometimes we don’t even know why.)

Since pit-dwelling is primarily a state of mind, effective deliverance also takes the ability to read people’s minds, because what we say often doesn’t match where we are.

Maybe I’m just talking about myself, but whether or not I realized it, I usually found a way to frame my pit to make me look like a victim. Not only is God omniscient, His Word is “sharper than any double-edged sword” cutting our baloney so thin He can see straight through it. He knows when we’re kidding others. He knows when we’re kidding ourselves. Knowing all we are, all we feel, and all we hide, God overflows with love and willingness to deliver us. Even after Israel sought the help of the Egyptians, inviting the chastisement of God, Isaiah 30 testified,

Yet the Lord longs to be gracious to you; He rises to show you compassion. — Isaiah 30:18

Longs to be gracious. I like the ring of that. We’re also repeatedly told that “His love endures forever” which means the Lord is gracious for long.

That’s what former pit-dwellers like me must have. We need a Deliverer who is in for the long haul. Philippians 1:6 tells us that God, who began a good work, is faithful to complete it. Frankly, work doesn’t get harder than pit-dweller pulling. Man, who may begin a good work, wears out too fast to finish it. And rightly he should. It’s not his job. True delivery takes some time, some titanic effort, and more patience than the best of people possess. You and I need a strong arm and a long arm.

The apostle Paul described God’s tenacity in 2 Corinthians 1:10 when he said,

He has delivered us… He will deliver us. On Him we have set our hope that He will continue to deliver us. (emphasis mine).

Past. Present. Future. That’s the kind of deliverance from the pit you and I are looking for. We’ve got to have a lifetime warranty. The “Sovereign Lord” alone is “my strong deliverer” (Psalm 140:7). Everybody else will wear out.

Excerpted with permission from Get Out of That Pit by Beth Moore, copyright Thomas Nelson.

From Beth: Maybe this isn’t for you. Maybe you can’t think of a single time you made someone else responsible for your happiness… your wholeness… your fulfillment… your healing… your future. But then again, maybe some of the fog has cleared on a relationship you believed at one time would be a deliverance of sorts for you. Instead, you were left disillusioned or disappointed when that person dropped the rope. Possibly devastated. Maybe you’re beginning to see that this person wasn’t being heartless and hateful. Just human. Didn’t have what it took. Maybe you can allow God to bring you to the place to forgive that person for failing to be Jesus for you. Or maybe you should fire someone who still insists on trying. Maybe you — like me — can now forgive yourself for accidentally setting someone up for failure. Maybe that someone was you. And maybe both of us could just let Jesus be Jesus.

Come join the conversation on our blog! We would love to hear from you about choosing the only reliable, in-it-for-the-long-haul Deliverer to get you out of your pit! ~ Devotionals Daily