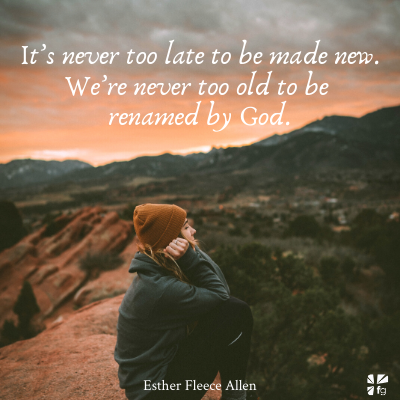 I’ve been a Christian a long time. I remember praying the sinners prayer many times in hopes that God would extend ongoing grace and forgiveness to me and accept me as His daughter. After some time, I learned I didn’t have to pray this prayer over and over again, and I discovered that God adopted me and called me His own. Believing this name helped me live out of my new identity as a Christ-follower, and taught me new things like how my inheritance is now in Christ Jesus.

As I became more comfortable in my spiritual adoption as God’s daughter, I began believing His words about who I am. But even as I was growing in my faith, old labels still stuck around me and I didn’t know what to do with them. I was straddling the fence with who God says I am, and who I was. Unintentionally I was holding on to the labels that have lied to me, not knowing that God had more new names for me to live out of. Labels stuck around like “broken past” and “didn’t belong” and I didn’t know how to live out of something new, despite my best efforts.

Many of us have incorrectly taken on labels as our names. Maybe we have been labeled “loser” or a “dropout” or “unemployed.” Maybe we’ve labeled ourselves “unattractive” or “overweight.” But God doesn’t settle for labels that limit. Instead, He gives us a names that call us into a new identity that He has crafted just for us – names with meanings and names that speak to who we will become. Could mislabeling ourselves be preventing us from living out of our new name?

The Old Testament tells of a wicked king named Ahab, who “did more evil in the eyes of the Lord than any of those before him” (1 Kings 16:30). Ahab worshiped false gods and led his country to do the same.

God sent the prophet Elijah to confront the people for their sin of idolatry. In 1 Kings 18:21, Elijah asks the people, “How long will you waver between two opinions? If the Lord is God, follow Him; but if Baal is God, follow him.”

In a similar way, God may be asking us, “How long will you waver between two names?”

Will we be known by the ungodly way we used to live or by our new name, and with it our new obedience? Will we be known by our sins of the past? Or will we seek God, persevere through the wrestling as Jacob did, and fight to believe we are forgiven and made new. Can we leave our old labels behind and anticipate a bright future only He can give?

And how did the Israelites respond to this question? “But the people said nothing” (1 Kings 18:21).

Can you imagine God speaking to you today, asking you one of His signature questions, and you say nothing? I’m afraid we do this all the time, either by ignoring His voice, not making time to listen to what He has to say, or choosing to not live out of who He says we really are.

As God speaks to us, He reveals His heart to transform us. Our silence reveals our backseat ambivalence about allowing such transformation to take place. The absurdity of saying nothing in the face of this astonishing invitation speaks for itself.

Maybe we have trouble hearing from God in the first place. Maybe we don’t take the time to hear God and listen for our new name. Maybe we don’t believe God has new names for us. Maybe we’re comfortable in the same old patterns of identity and action we’ve known for so long.

Pastor Louie Giglio says, “You don’t need a codependent relationship with your old self.” And it’s true. Are we willing to say goodbye to the labels that limit us, and embrace the new names God has for us?

The people during Ahab’s time straddled the fence and wavered between two identities. Yet today, you and I do not need to waver. We cannot be new creations and live out of our old names — these two things cannot coexist. When we hear our new name, we are tasked with believing and becoming who God says we are.

I traded in my former label “orphan” and decided to take up my new name “Chosen.” I want to leave the label behind that I am a “disappointment,” and embrace my new name “Accepted” and “Known.” And how about you?

Which labels have stuck with you for far too long, muddying the waters about who God says you are?

I recently took up a new last name, after marrying my husband Joel Allen. Just as legally changing one’s name is a long and tedious process, a spiritual name change can be a long process too. We have to give ourselves permission to take time and not expect that our new name is going to come easily or without a fight. Some of us will fight for purity with our eyes for the rest of our lives. Some of us will attend codependency meetings for the rest of our lives. But we are extended this invitation to be made new, and this invitation from God never expires.

New does not mean “instant” or “overnight.” New means “not like we used to be.” New means believing what God says about us and living into this new identity and reality with complete trust in Him. So do what it takes to be new and to stay new. Your old name no longer defines you. Your wrestling has been hard and long, but you have a new identity to show for it. Our new names but God’s work on display, not our sin, what others label us or our shame.

Isn’t it time to leave labels that have limited you behind in the new year? Labels like “forgotten” “rejected” or “not enough?” Ask God for your new name. You may be surprised which new names come to you. Names like “Overcomer,” “Provided for” and “Seen by God.” It’s never too late to be made new. We’re never too old to be renamed by God. Let’s begin this new year by asking God what new names He has for us. He will help us hear and overcome!

Written for Devotionals Daily by Esther Fleece Allen, author or Your New Name.

What labels have you, maybe even unintentionally, accepted about yourself? Are you ready to ditch those and step into your true new name in Jesus? Come share some of the new identities that are replacing old lies in your life on our blog. We want to hear from you! ~ Devotionals Daily