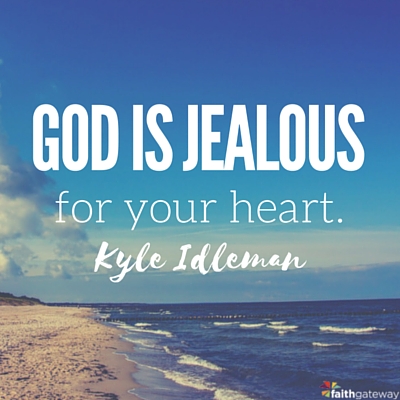 You shall not make for yourself an [idol] in the form of anything… You shall not bow down to them or worship them; for I, the LORD your God, am a jealous God. — Exodus 20:4-5

Wouldn’t it be interesting if people were not only called by their given names but also by their most dominant personality traits? Wives, what would your husband’s name be? Maybe something complimentary like sweet-talker or strong protector. Or maybe it would be something a little less complimentary.

In Scripture, the Lord God is often named by His character qualities. He is the “King of Kings,” “Deliverer,” “Provider,” “Healer,” and “Redeemer”; the list goes on and on. Yet of all the names of God, there is one that seems out of place. Exodus 34:14 reads,

Do not worship any other god, for the Lord, whose name is Jealous, is a jealous God.

Jealous? That word doesn’t seem very… well, positive. It feels petty to me — like a couple of junior high girls who are both interested in the same boy; like a basketball player who avoids passing the ball to the teammate who keeps getting the high score; like a possessive high school boyfriend who becomes upset if his girlfriend makes eye contact with another guy.

Besides, what reason would God have to be jealous? Doesn’t everything already belong to Him? Is there anything that competes with His power or his greatness? Of course not — at least not in reality. But what about in your heart?

God is jealous for your heart, not because He is petty or insecure, but because He loves you.

The reason why God has such a huge problem with idolatry is that His love for you is all-consuming. He loves you too much to share you…

And here’s what is said of God:

For the Lord your God is a consuming fire, a jealous God. — Deuteronomy 4:24

In the Bible, the words jealous and zealous are basically interchangeable — it’s the same Hebrew word in the original texts. In English, we spell the two almost the same because they derive from the same Greek root. We think of zeal as being intense enthusiasm. That idea captures why God is so possessive about us: He is, as He says, a consuming fire of passion for us.

Do you remember falling deeply in love — how you burned with a deep passion for the love of someone, how you were consumed with these feelings? That was only the barest shadow of the power of God’s love for you.

We need to remember, as we talk about God’s intolerance of idolatry, that everything comes back to a passionate love that is so immense, so powerful, that it burns hotter than a billion suns.

Watch the Gods at War Video

Excerpted from Gods at War: Defeating the Idols That Battle for Your Heart by Kyle Idleman.

Has God’s title or label of “Jealous” been confusing to you? How do you respond to the understanding that His jealousy is actually His zeal, His love, His burning passion for you? Come join the conversation on our blog! We want to hear from you! ~ Devotionals Daily