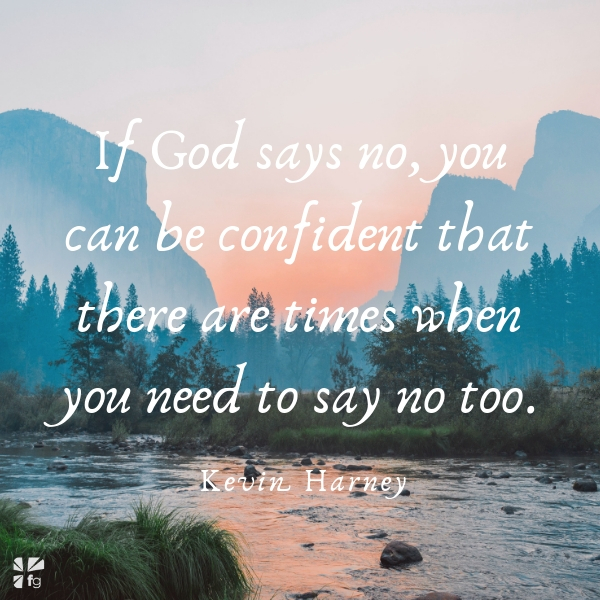 Sometimes God says no. Let’s look at two examples. The first is silly and the other quite serious.

In the movie Bruce Almighty, Jim Carrey plays the title character, Bruce, who encounters God in the form of actor Morgan Freeman. God has decided to delegate his responsibilities to Bruce for a short period of time. As you can imagine, Bruce experiments with his unbounded power as he deals with an unending stream of prayer requests from billions of people around the globe.

Bruce attempts to manage the tsunami of prayers by setting up a filing system and then linking it to a database on his computer. In utter exasperation at the sheer number of requests, Bruce decides to hit the yes button and affirmatively answer every prayer request flooding his computer and his mind.

This would seem like a good idea, except thousands of people now win the lottery on the same day. They are expecting millions of dollars, but because the payout is split among all the winners, they end up with just enough money for a modest dinner out, leading to disappointment, riots, and mayhem.

Behind this humorous scene is a serious point.

God is not really concerned with whether we win or lose the lottery. He says no on a daily basis to the self-centered barrage of requests we make for easy money without work or responsibility. God is the wisest and most beautiful being in the universe, and He does what is best for us, even when we don’t understand why. God does not always say yes to our prayers. He is far too loving to give in to self-centered prayers that cause more harm than good.

There is a fascinating account in the Bible of a day in the life of Jesus. It is found in Mark 1:21–39. Here we get a glimpse of how Jesus lived and loved. As the day begins, Jesus goes to a local place of worship and preaches. His power and authority amaze the people. Right in the middle of His message, a man who is spiritually tormented begins shouting out questions and making wild statements. Jesus silences him and speaks to the demon terrorizing the man. The man convulses, screams, and is set free.

After the worship service, Jesus walks with some of His friends to one of their homes, where a woman is sick with fever. Jesus goes back to work again. He shows love, care, and compassion by healing the woman.

That same evening, when the Sabbath time of rest is over and people can move about freely, a massive crowd descends on the home where Jesus is staying. This leads to a spontaneous time of compassionate service, during which Jesus heals the sick and frees those who are locked in the chains of spiritual bondage. Sickness is defeated and demons are sent running for the hills!

Very early the next morning, Jesus wakes up and takes a walk. He finds a quiet place where He can talk with His heavenly Father, but some of His disciples track him down to let Him know that there are people looking for Him. The disciples request that Jesus return to town and do more miracles and heal even more people.

He is crystal clear in His response.

Jesus knows there are still needs He could meet. He knows the people want Him to stay and offer what only He can give them. He is profoundly aware that many will be disappointed if He does not come back.

But Jesus is committed to His mission. And His primary focus is not healing. He has come to be a teacher and a preacher. So Jesus says to His disciples,

Let us go somewhere else — to the nearby villages — so I can preach there also. That is why I have come. — Mark 1:38, emphasis added

His response to the request is clear, simple, and mission driven. And it is an emphatic no. In His wisdom, Jesus — who is God in human form — says no to the urgent requests and needs of people so He can say yes to something greater, something better.

When we look back on our lives, I believe, all of us will be thankful that God said no to some of our prayer requests. I dated a couple of nice girls before I met my wife, Sherry, and there were times when I asked God, “Could this be the woman I will spend the rest of my life with?” God said, “No!” When I finally met my wife, I looked back and thanked God for His kind no. His no was preparing me for a better yes!

Jesus was “God with us” (Matthew 1:23). It was in His power to say yes to every request, yet there were times He said no. And if God says no, what does that teach us about the need for us to say no as well?

Take a moment to reflect on your life. Has God ever said no to something you wanted? Are you able to see wisdom in that no today?

If God says no, you can be confident that there are times when you need to say no too.

Excerpted with permission from No Is a Beautiful Word by Kevin Harney, copyright Kevin G. Harney.

Do you feel like no is a bad word? Is no a mean word and yes a kind word to you? What might happen if you started staying no (just as Jesus did) when a yes would take you off mission? Come share with us on our blog. We want to hear from you! ~ Devotionals Daily