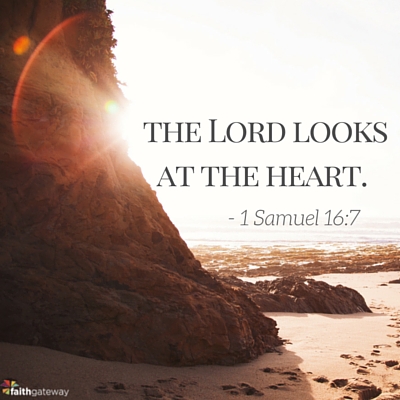 I don’t know what your story is, where you’ve been, what you’ve done, or what has been done to you. But I do know from God’s Word that you are not here, in this place and this time, by accident.

As you give God your time, your gifts, your resources and talents, He will use them to have a critically important and eternal impact on this world.

God demonstrates this truth in the story of David. Through his life, we can see God’s preparation process in action and discover the principles we need to grasp so that we, like David, can learn to embrace our place. Saul was the first king of the Israelites, but after leading them for about twenty-five years, Saul rebelled so much against the Lord that God sent His prophet Samuel to anoint the future king who would succeed Saul. The Lord said to Samuel…

I am sending you to Jesse of Bethlehem. I have chosen one of his sons to be king. – 1 Samuel 16:1

So Samuel went as instructed and had Jesse present his sons. We are about to witness an important principle: God chooses the part we play. Let’s admit it — from a human standpoint, there are times when God’s choices defy our logic. Left to his own judgment, the prophet got it wrong. He looked at the firstborn, Eliab, saw his impressive appearance and size, and assumed Eliab must be God’s choice. When they arrived, Samuel saw Eliab and thought, “Surely the Lord’s anointed stands here before the Lord.” But the Lord said to Samuel,

Do not consider his appearance or his height, for I have rejected him. The Lord does not look at the things people look at. People look at the outward appearance, but the Lord looks at the heart. – 1 Samuel 16:6-7

Clearly, God’s ways are not our ways. He’s not looking for obvious external qualifications. God looks at the heart. So Samuel considered the next son, and then the next, and the one after that, until finally, Jesse had seven of his sons pass before Samuel, but Samuel said to him, “The Lord has not chosen these.” So he asked Jesse, “Are these all the sons you have?” “There is still the youngest,” Jesse answered. “He is tending the sheep.” 1 Samuel 16:10-11 David, the last born, the least qualified from a human point of view, was so far removed from his father’s mind as a possible candidate for this job that Jesse hadn’t even brought him to the selection process. A mere teenager, David was out tending the sheep, faithfully serving his family in the job he’d been given. We can hardly imagine his shock when, plucked from his shepherding, he found himself face-to-face with a prophet of God who did this:

Then the Lord said, “Rise and anoint him; this is the one.” So Samuel took the horn of oil and anointed him in the presence of his brothers, and from that day on the Spirit of the Lord came powerfully upon David. – 1 Samuel 16:12-13

David did not choose to be king. God chose David to be king. And where was David when he was summoned? Serving in obscurity.

When we trust that God chooses the part we play, then we need not worry about our obscurity and anonymity, only our obedience to play our part.

Are you given the jobs that no one else wants? Welcome them. Do you feel disregarded by your family, your boss, your coworkers? Then you are in David’s good company. He was marked by God as the right person for the right job at the right time. We must remember that God has designed us and knows how and where we fit perfectly into His body so that we will reach our optimum potential. You must have confidence in God’s design and placement in order to embrace your place. If you feel lost in anonymity in the place you are now serving, think of David, working in the fields when his brothers were being paraded in front of Saul, each as a potential king. You are not anonymous to God. He knows your name. He sees you when you faithfully serve Him. God knows your potential and your faithfulness when no one else does. God sees your heart, and if God has assigned you to your place, God will find you when it is time for your promotion.

What is your response to Christine’s questions? Are you frustrated with God’s timing? Do you feel ignored at work? Overlooked at home? Forgotten in a place where you serve? Trust God for His perfect timing! Come join the conversation on our blog! We would love to hear from you! ~ Devotionals Daily