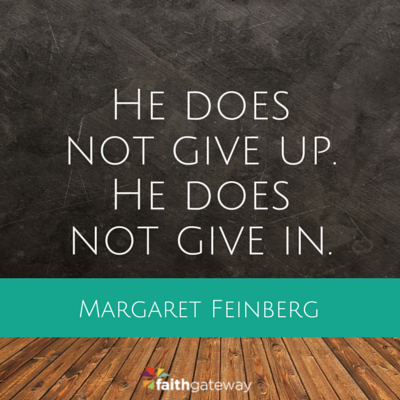 In Hebrew, Midrash means to search out. Midrash asks the reader to find those quirky, oddball Scriptures and inconsistencies and try to make sense of them before God. It challenges us to explore that which we do not know in order to better understand the One we want to know.

Midrash invites us to have a little chutzpah with the Bible.

Like a good verbal exchange with my husband, Jewish midrash urges us to take hold of a passage, wrestle with it, and not let go until we’re worn out and forcibly must cry uncle. Midrash has become one of the beautiful connecting points where my

Jewish heritage and Christian beliefs intersect. Through this ancient practice of biblical study, I am invited into the depth of Scripture — to trade in a surface understanding for a deeper grasp of a passage’s meaning. Sometimes when I finish midrash, I discover that I know less than I thought I did, but even in that, I actually know more than I did when I started.3

I knew my honey-bunny would like Jewish midrash as much if not more than me. On one Sunday morning before church, I asked him if he wanted to study the Bible together — midrash style. He jumped at the opportunity. We began in Genesis 19, since that’s where I had left off in an earlier reading, and we took a hard look at the doom of Sodom. We read of the angels entering the city, wondering what angels might be in our city at the moment. We reflected on the unthinkable act of Lot offering his own daughters to sexual predators. We read of Lot’s wife, whose regretful glance cost her everything. The chapter was packed with paradoxes, ironies, and countless unanswered questions. With so many passageways to explore, we didn’t know which to choose. Somehow, one chose us.

We began to look at what other Scriptures said about Sodom. While passages such as the seventh verse of Jude highlight the city’s reputation for sexual immorality and perversion, we stumbled on this gem in Ezekiel 16:49-50:

Now this was the sin of your sister Sodom: She and her daughters were arrogant, overfed and unconcerned; they did not help the poor and needy. They were haughty and did detestable things before me. Therefore I did away with them as you have seen.

We sat in awe of this passage. Sodom is synonymous with sexual sin. Every message, illustration, or reference I heard while growing up made it clear that the twin cities of Sodom and Gomorrah were destroyed because of sodomy. More than one spiritual leader had used the Genesis account as a hallmark against sexual sin. But it’s no accident that Ezekiel highlights the lack of care for the poor before he ever mentions any sexual activities. The passage uncovered something deeper for me and my husband that Sunday morning — the sexual acts were merely outward behaviors of inward attitudes. The heart issues ran deeper: the people had become prideful, self- satisfied, and apathetic.

Before this morning of midrash, I could have read Genesis 19 as a distant story in a faraway land. Now I was confronted with myself in the story.

I am no different than anyone found in the twin sin cities. As a contributing member of an arrogant culture, whose pride reaches international proportions, I make my donations in small ways every day — through self-righteous and better-than-you attitudes, insensitive self-serving opinions, and nationalistic tendencies and beliefs. My pride puts itself on display in the ways I shop, dress, eat, and talk, and is only compounded by the fact that I live in an overfed, prosperous society. While thousands are quietly starving, I’m busy buying a twelve-pack of paper towels at Costco. Such bounty reveals that real poverty comes from both lack of access as well as abundance of excess. The result is an unconcerned, apathetic response to those in need which almost reads like an equation:

Now, that doesn’t mean I’m not quick to respond to need — especially my own — but when it doesn’t concern me, involve me, or somehow help me, there’s a tendency to get only minimally involved or worse, not get involved at all.

That may sound cold and naked, but that’s how the passage in Ezekiel made me feel. I quietly asked the Organic God to do something and anything in me at the same time. The desire became a two-word prayer: Change me.

Leif eventually closed out our time of midrash study and we went to church. But I couldn’t shake eight words from the Ezekiel passage: They did not help the poor and needy.

I thought about going to the grocery store and buying items for a local food bank, but the afternoon filled up with activities and I never got around to going shopping.

The next morning I went to buy a parking pass at the airport for an upcoming trip. On a whim, the woman gave me the pass for free. It was the equivalent of handing me more than fifty dollars in cash. I smiled, thanked the gracious woman, and left feeling grateful and humble. All I could think was, How many gifts can I possibly contain before I begin to give back?

I couldn’t stand it anymore. That was my tipping point — the moment when I knew something had to give and that something was me.

I drove straight to the grocery store, and with a mad dash that resembled Supermarket Sweep, began filling up the cart with products for the local food bank. I piled the cart with dozens of items and entered the checkout lane with a full basket and more importantly an overflowing heart. I delivered the food that afternoon and for the first time in two days felt a sense of peace.

Through that experience, which began with midrash, something very personal came together for me. I felt as if God was giving me a strategy on how to survive when you find yourself living in and succumbing to an arrogant, overfed, unconcerned society:

Care for those who have less than you.

Have you ever noticed that when God really wants to get your attention, He says the same thing in countless different ways? Genesis 19 is only one of the ways God has been whispering His concern for the poor into my life. I see it time and time again — through movies, videos, magazine articles, newspaper clippings, Scriptures, conversations, sermons, and friends.

The message is being scrawled on the walls of my life. Serve the poor and needy. Give voice to those who cannot speak for themselves. Protect the defenseless.

If seen in a negative light, stubbornness is often synonymous with being inflexible and bullheaded. But God’s unwillingness to yield — His stubbornness, if you will — is not haphazard. It’s founded in His love — His firmly resolved, absolutely determined, unrelenting love.

The recent SCOTUS decision regarding gay marriage brought out strong reactions worldwide. Some celebrated. Some wept. Some pumped their fists claiming #lovewins. And some clung to the fact that Love indeed does win, but were heartbroken for the state of America’s obedience to God. Today, let’s be reminded that God is the same yesterday, today, and forever (Hebrews 13:8). He is still omnipotent, omnipresent, and omniscient. He is not surprised. He’s in control.

Today, let’s turn the spotlight on our own hearts and ask the question: How many gifts can I possibly contain before I begin to give back? Let’s pray: Change me, Lord! Who in your world needs help today? Who are the poor and needy around you and how can you give to them today?