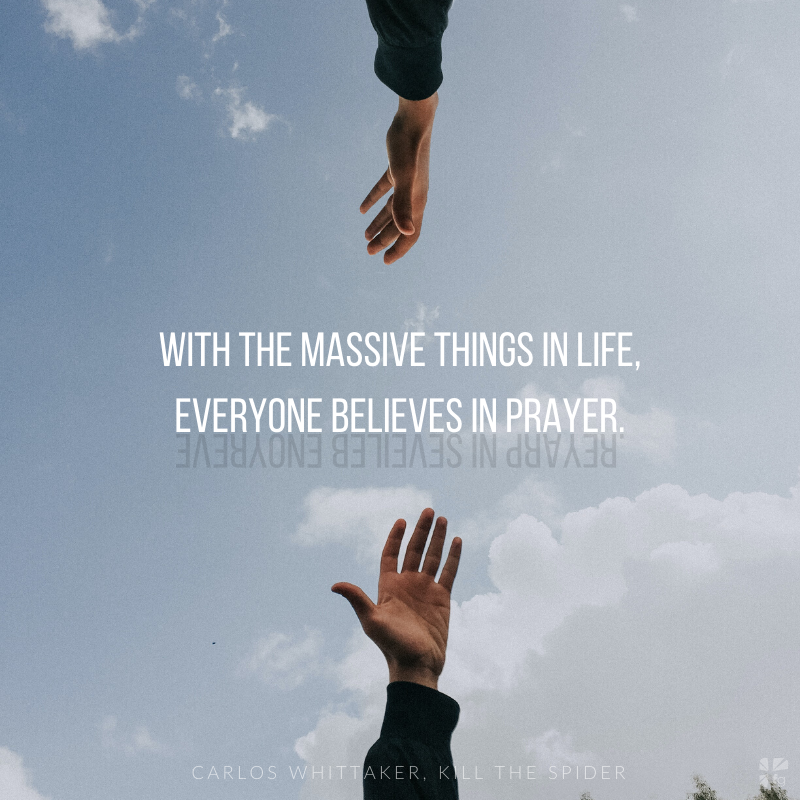 When my eyes opened the next morning, they didn’t move left or right. They just stared straight up. The ceiling fan above my bed was strangely therapeutic. As I watched it go around and around I recollected my week so far. I’d left my family for a week. I’d given up my connection to the outside world (my phone). I’d accidentally stopped believing in God. I had discovered a memory of something horrible happening to me when I was just a little boy. At this rate, by the end of the week I would be a thousand times worse off than when I showed up. This was not going as I had anticipated. My thought was that by day four I would be four times better of a human being than I was when I showed up, but I felt like I was going backward. Things were hurting in places in my soul that I hadn’t even known existed. This wasn’t what I signed up for.

So after laying there for fifteen minutes, I thought, God, if there is still one, we need to talk. I walked over to my suitcase and pulled out my running shoes. The shoes that I pack on every trip with the intention of using them, but they never make it out of the bag. That day, they were going to be more therapy than I knew at that moment. I walked out of the cabin and hit the pavement with a pace normally reserved for a seventeen-year-old cross-country runner, not a forty-year-old out-of-shape dad. But something inside of me was raging and I needed to get it out.

As I came up the bluff and saw the scene of the crime from earlier that week, the labyrinth, I started yelling. I started yelling at God. Literally. Yelling. As my volume grew louder, so did my pace. Before I knew it, I was at the bottom of a hill by a creek and completely out of breath and strength. I stopped yelling and moving. I found a tree and sat down. And then I just started sobbing. Like the sobbing that should be reserved for funerals. And you know what? At the time, I kind of felt like it was a funeral. A funeral of everything I believed. But if I didn’t believe anymore, then why was I screaming at God? Why was I praying? It’s like there was, at the core of who I was, a glimmer of hope.

This prayer didn’t look or feel like any sort of prayer I was used to. But at the core, that’s what it was. A prayer.

We are about to dive into a section of the book that covers prayer. I’m going to talk about it a lot. And if you are anything like me, you will want to completely skip it and just get to the stuff that you don’t have to fold into a package and mail to a great big God in the sky. At least that is how I used to view prayer. It was a crap shoot. Some prayers worked. Most prayers didn’t. It’s not a secret; it’s obvious. So before you start making agreements about prayer based on your experience with prayer, go with me for a minute.

This prayer thing. I absolutely, inexplicably, tragically suck at it. I have never even remotely understood the potential in it or the significance of it….

In the Bible, God spoke to people through angels, burning bushes, and visions of dragons. Okay, maybe not dragons, but it was always epic. And, somehow, I was supposed to be convinced that God speaks in a quiet time. I wasn’t buying it. And I never did.

Here, people were beginning to get really serious about this whole prayer thing. At the small liberal arts school I attended, all the hippie students would gather around in circles at the front door of Frost Chapel and sing songs together. It was called Prayer and Praise. I loved Prayer and Praise. I even bought a guitar to strum along. The prayers were always filled with concern for roommates “far from God” and prayers for the healing of sickness. “Dear God, Please, I beg, Amen.” Their prayers were filled with that kind of stuff. But I’d say these nights were about five minutes of prayer and sixty minutes of singing. All the pretty girls were there, so I got really good at this sort of prayer.

I don’t think I ever even heard if any of these “prayers” were answered. We definitely did not have Prayer and Praise check-ins. It was simply missile launch prayers into the sky, and we hoped they would hit their target.

I’m thinking that the distance between the prayer I prayed as a preschooler for my food and these Prayer and Praise missiles was about two inches. It’s easy to read this as “Carlos is disrespecting prayer. God hears all of our prayers!” I don’t mean to disrespect anyone else’s prayers, but I’m not sure I ever grew deeper in my faith or closer to God through this type of prayer. It was something that felt so very… ordinary.

Venturing into adulthood prayer didn’t get much deeper. But I did become acutely aware that it was supposed to be. At the church where I was on staff, there was a woman named Sue. She was about twenty-five years older than the rest of us. Every time she would come around me, I would feel peace like no other. You know those types of people, right? They just exude peace. When she would look me in the eye, she would pierce straight to my soul.

Sue served as our “Prayer Minister.” The first time I heard her pray, it was as if somebody placed an oxygen mask on me. I could breathe. It was mind blowing.

There was something different about her when she prayed. I can only describe it as real.

When she would pray for me, I felt the world stop. It was like nothing I had experienced before. It wasn’t a listing of needs. It was a conversation with God, almost as if she could actually hear Him responding.

I remember wanting to be able to pray like that, desiring communion with God like that. I also remember believing that there was no way I could ever pull that off. As jacked up as my faith was, I could barely walk a straight line into church, much less pray the paint off the walls. There’s that “fraud” lie again. Sigh.

At least I had Sue. At least I could get her to pray for me whenever I needed….

The only time I really prayed for anything was when I needed something major in my life. At those times, I would turn on the “I Believe in Prayer” switch. Honestly, I did believe. I prayed holes in the knees of my jeans when I suffered my anxiety attack. I prayed so hard when we went to adopt our son, Losiah. I prayed morning, noon, and night for my uncle Roger when he was diagnosed with cancer.

With the massive things in life, everyone believes in prayer.

So, at our root, all of mankind wants to believe it is possible to get ahold of our God and ask Him for help. But could there be more? Could our God actually have given us the Holy Spirit that allows us to commune with Him not only in crisis and when we need something, but to walk and talk with us daily, in the everyday moments of life? Could the prayer life my friend Sue has be available to us all? Could we really and truly have direct access to God not only to help us, but to talk with us, laugh with us, cry with us, and be with us?

Can’t He be the God of the normal — who can, if we ask, tell us where we need to go to lunch, exactly where we need to move, how much money we need to budget for movies next month, and where the heart of our spider is and exactly how to kill it?

I’ve got the answer. Are you ready? Do you have your Moleskine with empty pages and a new pen ready to furiously write down the pages of instructions I’m about to give you? Okay, here it is: Just… begin.

Just gaze at Him. Just look at Him. Right now. Look at Him. “Where do I look, Carlos?” Good question. Look toward the place you have felt Him before. Was it a verse that gave you a sudden breath? Was it in the mountains where you saw the vastness of His creation? Was it on a date with your spouse where He showed you how much He cares for you? Go to that place and stare at Him for a bit.

If in this season prayer has ceased to interest you or maybe you’ve lost a little bit of your faith in God even listening to you, we hope you found this excerpt to be relatable and helpful. Have you found yourself in a place of desperation where prayer was the only thing left to turn to? We’d love to hear from you. Come share on our blog!