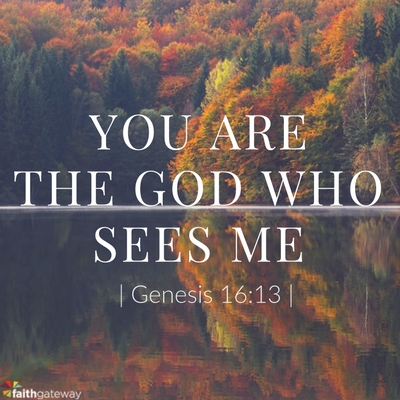 On November 11, 1921, the United States laid to rest the remains of a World War I soldier, his name “known but to God.” The Virginia burial site became known as The Tomb of the Unknown Soldier and symbolizes respect and dignity for the warriors whose bodies were not able to be identified — those who gave their lives in obscurity. November 11 is now called Veteran’s Day.

The Tomb of the Unknown Soldier has always seemed very beautiful but very sad to me. Each of us longs to be seen and known. We want someone to witness our lives and know that we really did exist, that we really did matter. But in this push-and-shove society, it’s hard to be noticed and easy to feel invisible. That’s why I love the story of Hagar.

Hagar is a mysterious and much-maligned character. As the maid to Abraham and Sarai, it appears she had a quiet life until God promised the couple a son. Sarai, unable to trust Him to fulfill His promise through her own aging body, devised an alternate plan, and Hagar found herself swept into Abraham’s bed and Sarai’s faithless scheme. The maid goes along with the plan, but her attitude turns sour as soon as she gets pregnant. Considering the twisted dynamics of this domestic situation, it’s not hard to imagine how her behavior might be justified. Did Hagar want to have Abraham’s baby? Did she perhaps love another? Did she hope for children that belonged only to her and not to her mistress? So many possibilities for heartache here.

Sarai mistreats Hagar so viciously that it drives her away. This part of the story is heart-wrenching because it reveals how utterly alone Hagar is in the world. It seems her entire identity is tangled up in the house of Abraham, and now she is with child and without protection. She stumbles through the wilderness until an angel finds her and speaks into her broken heart, asking a provocative question, “Hagar, slave of Sarai, where have you come from and where are you going?”

Hagar, on the run and all alone, hears her very own name trip off the tongue of a heavenly being. Suddenly, the invisible woman is divinely seen. Known. Chosen. The angel gives her clear instruction and some important promises about her baby’s future before sending her back home. Hagar’s response is to give the Lord a new name, and I think it’s one of the most beautiful names we find in the whole Story of God. “You are the God who sees me,” for she said, “I have now seen the One who sees me.”

The One Who Sees Me

This aspect of God’s nature may not be as important on a day when our banners are waving and the crowds are cheering. In the seasons when we feel celebrated and surrounded, God can easily become just another set of eyes in the bleachers. But when we’re running for our lives or wandering through the wilderness of isolation, failure, or rejection, the discovery that God is watching is worth nearly everything.

You have searched me, Lord, and you know me. You know when I sit and when I rise; you perceive my thoughts from afar. You discern my going out and my lying down; you are familiar with all my ways. Before a word is on my tongue you, Lord, know it completely. You hem me in behind and before, and you lay your hand upon me. Such knowledge is too wonderful for me, too lofty for me to attain. (Psalm 139:1–6)

Even after following God for most of my life, I still wake up some mornings feeling invisible.

If I’m honest, some days I want to be invisible.

I want to hide away from everyone, including Him. I lick my wounds and curl up into my own pain, trying to lock out the sounds of all other voices. It’s into those moments God speaks. He pursues me. He finds me and reminds me that my battle has not moved me outside His line of vision.

I have a big question for you today: Where have you come from and where are you going? Are you on the run from hurts and heartache?

I promise you this: He sees you on your battlefield, and you will never be unknown.

This is exactly the right time to let Him speak.

Dear God of All, I confess that I am not hidden from You or shrouded in the darkness of my own shame or sadness. I open up my life to Your eyes. Search me, know me, break through the mists of confusion, and find me here, helpless without You but everything with You. I am Yours alone. Amen.

Watch the Video for When Holidays Hurt

Excerpted with permission from When Holidays Hurt: Finding Hidden Hope Amid Pain and Loss by Bo Stern, copyright Thomas Nelson 2014.

After reading Psalm 139:1-18, share your list of the ways God sees and knows you! Join the conversation on the blog. We would love to hear from you! ~ Devotionals Daily