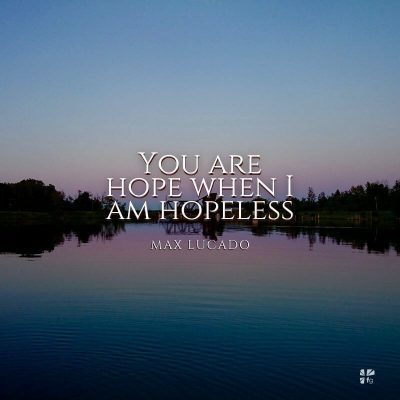 We don’t discuss graveyards to brighten our day. Cemeteries aren’t typically known for their inspiration. But an exception was found in a graveyard near Bethany. And that one exception is exceptional.

A man named Lazarus was sick. He lived in Bethany with his sisters, Mary and Martha. This is the Mary who later poured the expensive perfume on the Lord’s feet and wiped them with her hair. Her brother, Lazarus, was sick. So the two sisters sent a message to Jesus telling Him,

John weighted the opening words of the chapter with reality: “A man named Lazarus was sick.” Your journal might reveal a comparable statement. “A woman named Judy was tired.” “A father named Tom was confused.” “A youngster named Sophia was sad.”

Lazarus was a real person with a real problem. He was sick; his body ached; his fever raged; his stomach churned. But he had something going for him. Or, better stated, he had Someone going for him. He had a friend named Jesus, the water-to-wine, stormy-sea-to-calm-waters, picnic-basket-to- buffet Jesus. Others were fans of Christ. Lazarus was friends with him.

So the sisters of Lazarus sent Jesus a not-too-subtle message: “Lord, Your dear friend is very sick.”

They appealed to the love of Jesus and stated their problem. They did not tell Him how to respond. No presumption. No overreaching or underreacting. They simply wrapped their concern in a sentence and left it with Jesus. A lesson for us perhaps?

Christ responded to the crisis of health with a promise of help.

But when Jesus heard about it He said, ‘Lazarus’s sickness will not end in death. No, it happened for the glory of God so that the Son of God will receive glory from this’. — John 11:4 NLT

It would have been easy to misunderstand this promise. The listener could be forgiven for hearing “Lazarus will not face death or endure death.” But Jesus made a different promise: “This sickness will not end in death.” Lazarus, we learn, would find himself in the valley of death, but he would not stay there.

The messenger surely hurried back to Bethany and told the family to take heart and have hope.

When Jesus arrived at Bethany, He was told that Lazarus had already been in his grave for four days. — John 11:17 NLT

“Israel’s rabbinic faith taught that for three days a soul lingered about a body, but on the fourth day it left permanently.”1 Jesus was a day late, or so it seemed.

The sisters thought he was.

When Martha got word that Jesus was coming, she went to meet Him. But Mary stayed in the house. Martha said to Jesus, ‘Lord, if only You had been here, my brother would not have died’. — John 11:20-21 NLT

She was disappointed in Jesus. “If only you had been here.” Christ did not meet her expectations. By the time Jesus arrived, Lazarus had been dead for the better part of a week. In our day his body would have been embalmed or cremated, the obituary would have been printed, the burial plot purchased, and the funeral at least planned, if not completed.

I know this to be true because I’ve planned many funerals. And in more memorials than I can count, I’ve told the Lazarus story. I’ve even dared to stand near the casket, look into the faces of modern-day Marthas, Marys, Matthews, and Michaels and say, “Maybe you, like Martha, are disappointed. You told Jesus about the sickness. You waited at the hospital bed. You kept vigil in the convalescent room. You told Him that the one He loved was sick, sicker, dying. And now death has come. And some of you find yourselves, like Mary, too bereaved to speak. Others, like Martha, too bewildered to be silent. Would you be willing to imitate the faith of Martha?”

Look again at her words:

Lord, if only You had been here, my brother would not have died. But even now I know that God will give you whatever you ask. — John 11:21-22 NLT, emphasis mine

How much time do you suppose passed between the “if only” of verse 21 and the “even now I know” of verse 22? What caused the change in her tone? Did she see something in the expression of Christ? Did she remember a promise from the past? Did His hand brush away her tear? Did His confidence calm her fear? Something moved Martha from complaint to confession.

Jesus responded with a death-defying promise:

Jesus told her, ‘Your brother will rise again.’ ‘Yes,’ Martha said, ‘he will rise when everyone else rises, at the last day.’ Jesus told her, ‘I am the resurrection and the life. Anyone who believes in Me will live, even after dying… Do you believe this?’ — John 11:23-26 NLT

The moment drips with drama.

Look to whom Jesus asked this question: a bereaved, heartbroken sister.

Look at where Jesus stood as He asked this question: within the vicinity, perhaps in the center, of a cemetery.

Martha has had plenty of time to give up on Jesus. Yet now this Jesus has the audacity to pull rank over death and ask, “Do you believe this, Martha? Do you believe that I am Lord of all, even of the cemetery?” Maybe she answered with a lilt in her voice, with the conviction of a triumphant angel, fists pumping the air and face radiant with hope. Give her reply a dozen exclamation marks if you want, but I don’t. I hear a pause, a swallow. I hear a meek

Yes, Lord,… I have always believed You are the Messiah, the Son of God, the One who has come into the world from God. — John 11:27 NLT

Martha wasn’t ready to say Jesus could raise the dead. Even so, she gave Him a triple tribute: “the Messiah,” “the Son of God,” and “the One who has come into the world.” She mustered a mustard-seed confession. That was enough for Jesus.

Martha fetched her sister. Mary saw Christ and wept. And

when Jesus saw her weeping and saw the other people wailing with her, a deep anger welled up within Him, and He was deeply troubled. ‘Where have you put him?’ He asked them. They told Him, ‘Lord, come and see.’ Then Jesus wept. — John 11:33-35 NLT

What caused Jesus to weep? Did He cry at the death of His friend? Or the impact death had on His friends? Did He weep out of sorrow? Or anger? Was it the fact of the grave or its control over people that broke His heart?

It must have been the latter because a determined, not despondent, Jesus took charge. Jesus told them to roll the stone away. Martha hesitated. Who wouldn’t? He insisted. She complied. Then came the command, no doubt the only command ever made to a cadaver. Jesus, prone as He was to thank God for impossible situations, offered a prayer of gratitude, and

then Jesus shouted, ‘Lazarus, come out!’ And the dead man came out, his hands and feet bound in grave-clothes, his face wrapped in a headcloth. Jesus told them, ‘Unwrap him and let him go!’ — John 11:43-44 NLT

“Don’t miss the message of this miracle,” I love to say at funerals, although careful not to get too animated, because, after all, it is a memorial service. Still, I indulge in some excitement. “You are never alone. Jesus meets us in the cemeteries of life. Whether we are there to say goodbye or there to be buried, we can count on the presence of God.”

An encore is scheduled. Lazarus was but a warm-up. Jesus will someday shout, and the ingathering of saints will begin. Graveyards, ocean depths, battlefields, burned buildings, and every other resting place of the deceased will give up the dead in whatever condition they might be found. They will be recomposed, resurrected, and re-presented in the presence of Christ. Salvation of the saints is not merely the redemption of souls but also the recollection of souls and bodies.

When we are in Christ, we grieve, but we grieve with hope. Lazarus is proof of this. His death proved that our Savior grieves death with us. Jesus cares and understands and feels the weight of death just like we do. But as the conqueror of death, Jesus knows death is not the end. It is simply the beginning of a life we cannot imagine during our lives on earth. So grieve here, today. Receive the comfort of Christ in your sorrow, but hold fast to the promise that the sorrow you feel in the night makes way for joy in the morning.

Father, I know you are my comforter. I know you are strong when I am weak. I know you are hope when I am hopeless. I need all these from you today—comfort, strength, and hope—because I cannot muster them on my own. When I am deep in grief, all I see is darkness, and all I feel is hopeless. But you empathize with this pain. You know it well. Remind me of your love during this time. Remind me that I can share my thoughts and struggles with you. You are not afraid of negative feelings. Hold me as I walk through this season of grief. Don’t let me run away from it, but also don’t let me fall into despair. Guide me toward the hope and light I have in Christ. In his name, amen.

Excerpted with permission from God Will Help You by Max Lucado, copyright Max Lucado.

What are you grieving today, or what have you grieved most recently? What has your grieving process looked like? How does it feel to know Jesus also experienced grief? Come share your thoughts with us. We want to hear from you!

Weeping may endure for a night, But joy comes in the morning. — Psalm 30:5