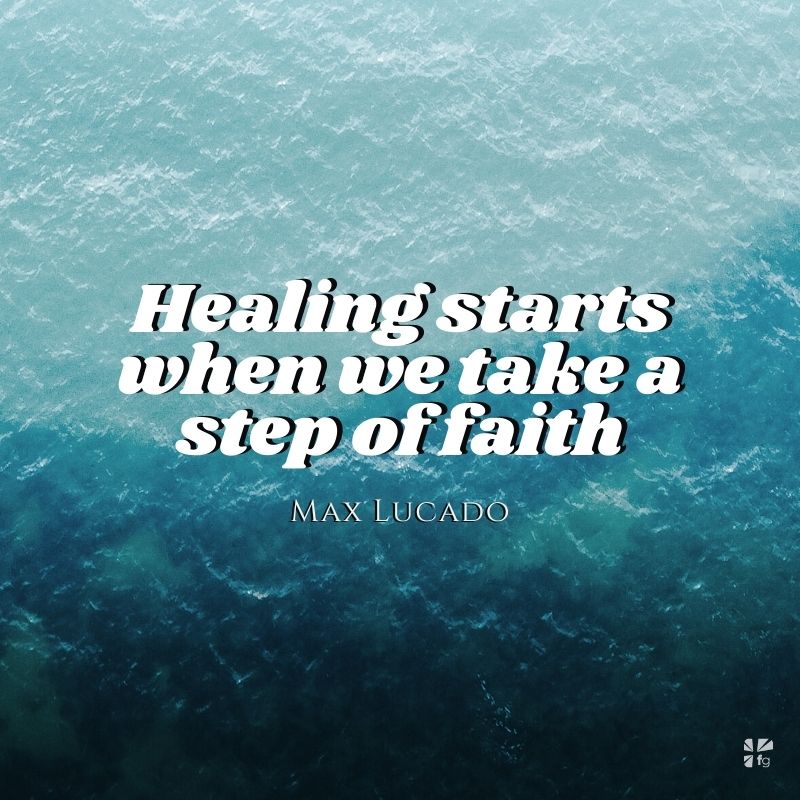 We don’t know her name, but we know her situation. Her world was midnight black. Grope-in-the-dark-and-hope-for-help black. Read these three verses and see what I mean:

A large crowd followed Jesus and pushed very close around Him. Among them was a woman who had been bleeding for twelve years. She had suffered very much from many doctors and had spent all the money she had, but instead of improving, she was getting worse. — Mark 5:24-26 NCV

She was a bruised reed: “bleeding for twelve years,” “suffered very much,” “spent all the money she had,” and “getting worse.” She was physically exhausted and socially ostracized. She awoke daily in a body that no one wanted. She was down to her last prayer. And on the day we encounter her, she’s about to pray it.

Perhaps you have felt this way. You’ve been sick for days, weeks, years. Doctors, specialists, tests — no one seems to know the cure, and you are tired. You are tired of being sick, but most of all you are tired of hoping. Each day you hope and pray today will be better than the last, and each day you are disappointed.

By the time the woman in our story gets to Jesus, He is surrounded by people. He’s on His way to help the daughter of Jairus, one of the most important men in the community. What are the odds that He will interrupt an urgent mission with a high official to help the likes of her? Still, she takes a chance.

It was her last hope, her last resort. Her last-ditch effort in a long series of efforts to be made well, and it all depended on this man they were calling a prophet. It all depended on Jesus. Risky decision. To touch Him she will have to touch the people. If one of them recognizes her, hello rebuke, goodbye cure. But what choice does she have? She has no money, no clout, no friends, no solutions. All she has is a crazy hunch that Jesus can help and a final hope that He will.

Maybe that’s all you have: a crazy hunch and a little bit of hope. You have nothing to give. But you are hurting. And all you have to offer Him is your hurt.

Maybe that has kept you from coming to God. Oh, you’ve taken a step or two in His direction. But then you saw the other people around Him. They seemed so clean, so neat, so trim and fit in their faith. And when you saw them, they blocked your view of Him. So you stepped back.

If that describes you, note carefully that only one person was commended that day for having faith. It wasn’t a wealthy giver. It wasn’t a loyal follower. It was a shame-struck, penniless outcast who clutched on to her hunch that He could help and her hope that He would.

Without faith no one can please God. Anyone who comes to God must believe that He is real and that He rewards those who truly want to find Him. — Hebrews 11:6 NCV

A healthy woman never would have appreciated the power of a touch of the hem of His robe. But this woman was sick, and when her dilemma met His dedication, a miracle occurred. Her part in the healing was very small. All she did was extend her arm through the crowd.

What’s important is not the form of the effort but the fact of the effort. The fact is, she did something. She refused to settle for sickness another day and resolved to make a move.

God’s help is near and always available, but it is given only to those who seek it. The great work in this story is the mighty healing that occurred. But the great truth is that the healing began with her touch. And with that small, courageous gesture, she experienced Jesus’ tender power.

Jesus turned around, and when He saw her He said, ‘Be of good cheer, daughter; your faith has made you well.’ And the woman was made well from that hour. — Matthew 9:22

If you are low on faith but need the healing power of Christ, perhaps you could rely on the faith of a friend. This is the type of faith Jesus witnessed when he saw a man being lowered through a hole in the roof where Jesus was teaching one day (Mark 2:1-12).

Whether he was born paralyzed or became paralyzed, we don’t know, but the end result was the same: total dependence on others. Perhaps someone had to wash his face and bathe his body. He couldn’t go on a walk or run an errand on his own.

When people looked at him, they didn’t see the man; they saw a body in need of a miracle. That’s not what Jesus saw, but that’s what the people saw. And that’s certainly what his friends saw. So they did what any of us would do for a friend. They tried to get him some help.

Word was out that a carpenter-turned-teacher-turned-wonder-worker was in town. By the time his friends arrived at the place, the house was full. People jammed the doorways. Kids sat in the windows. Others peeked over shoulders. How would this small band of friends ever attract Jesus’ attention?

They had to make a choice: do we go in or give up?

What would have happened had the friends given up faith? What if they had shrugged their shoulders and mumbled something about the crowd being big and dinner getting cold and had turned and left? After all, they had done a good deed in coming this far. Who could fault them for turning back? You can do only so much for somebody. But these friends hadn’t done enough.

One said he had an idea. The four huddled over the paralytic and discussed the plan to climb to the top of the house, cut through the roof, and lower their friend down with their sashes.

Faith does those things. Faith does the unexpected. And faith gets God’s attention. Look what Mark says:

When Jesus saw the faith of these people, He said to the paralyzed man, ‘Young man, your sins are forgiven’. — Mark 2:5 NCV

Finally, someone took Jesus at his word! Four men had enough hope in Him and love for their friend that they took a chance. The stretcher above was a sign from above — somebody believed! Someone was willing to risk embarrassment and injury for just a few moments with the Galilean.

Jesus was moved by the scene of faith.

The request of the friends was valid — but timid. The expectations of the crowd were high — but not high enough. They expected Jesus to say, “I heal you.” Instead He said, “I forgive you.”

They expected Him to treat the body, for that is what they saw.

He chose to treat not only the body but also the spirit, for that is what He saw.

They wanted Jesus to give the man a new body so he could walk. Jesus gave grace so the man could live.

And they were all amazed, and they glorified God. — Luke 5:26

Two pictures of miracle-prompting faith: A woman who reached out. Friends who drew near. Jesus responded both times. He did the impossible for them. He will do the same for you. And you know what the best news is? Jesus heals the body, but He also heals the soul. He sees you as more than just an ailing body. He sees that your heart, mind, and soul need healing too. He offers more than you ask because He knows exactly what you need. Come to Him, have faith, and He will make you well.

God, I know that you are my healer. You are the miracle worker. You can heal every sickness and disease. You can raise the dead to life. I confess it is easier for me to believe You can heal others than it is to believe You will heal me. It makes me feel vulnerable to trust You with my sickness and brokenness. I don’t want to get my hopes up and then be disappointed. At the same time, I don’t want to lose hope. Help me believe in Your healing powers. Strengthen my faith in you, Your power to heal me, and your love for me. Give me the courage to reach out to friends and family for help. May I encounter the healing powers of my Lord Jesus. May I believe again. Lord, make me well. In Christ I pray, amen.

Excerpted with permission from God Will Help You by Max Lucado with Andrea Lucado, copyright Max Lucado.

What needs healing in your life right now? What has been the most difficult part of this sickness or brokenness? Have you ever felt desperate for healing? Has your community ever helped you during a time of need? Our faith makes us well, whether that is in our bodies or our spirits. Faith is hope.