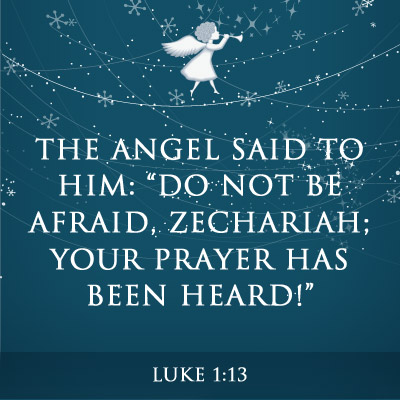 In the time of Herod king of Judea there was a priest named Zechariah, who belonged to the priestly division of Abijah; his wife Elizabeth was also a descendant of Aaron. Both of them were righteous in the sight of God, observing all the Lord’s commands and decrees blamelessly. But they were childless because Elizabeth was not able to conceive, and they were both very old.

Once when Zechariah’s division was on duty and he was serving as priest before God, he was chosen by lot, according to the custom of the priesthood, to go into the temple of the Lord and burn incense. And when the time for the burning of incense came, all the assembled worshipers were praying outside.

Then an angel of the Lord appeared to him, standing at the right side of the altar of incense. When Zechariah saw him, he was startled and was gripped with fear. But the angel said to him:

Do not be afraid, Zechariah; your prayer has been heard. Your wife Elizabeth will bear you a son, and you are to call him John. He will be a joy and delight to you, and many will rejoice because of his birth, for he will be great in the sight of the Lord. He is never to take wine or other fermented drink, and he will be filled with the Holy Spirit even before he is born. He will bring back many of the people of Israel to the Lord their  God. And he will go on before the Lord, in the spirit and power of Elijah, to turn the hearts of the parents to their children and the disobedient to the wisdom of the righteous — to make ready a people prepared for the Lord.

Zechariah asked the angel, “How can I be sure of this? I am an old man and my wife is well along in years.”

The angel said to him, “I am Gabriel. I stand in the presence of God, and I have been sent to speak to you and to tell you this good news. And now you will be silent and not able to speak until the day this happens, because you did not believe my words, which will come true at their appointed time.”

When he came out, he could not speak to them. They realized he had seen a vision in the temple, for he kept making signs to them but remained unable to speak.

In the days and months preceding the birth of Jesus Christ, things were predictable in that area of the world. Though Herod the Great had ordered some upgrades to the temple, daily worship and ritual did not cease. Twenty-four divisions of priests rotated on a timetable like gears in a Swiss watch. What happened each day was what was expected to happen.

But then an unexpected event occurred that disrupted the well-ordered world of one priest and his wife and led to a series of unexpected events that would eventually disrupt our world too.

Zechariah and his wife suffered unfulfilled longings. Though they were faithful servants of God, they had to endure the pain and disgrace of childlessness.

But Zechariah didn’t let his disappointments keep him from service. He did not get distracted from his duties to the Lord and to his community. And when a literal luck of the draw won him a turn in the holiest place of all, an angel appeared and promised his heart’s desire. God would override nature (as he had with Abraham and Sarah before) to prove His faithfulness. Elizabeth, a senior citizen, would bear a child. Their years of waiting and watching and hoping and praying would find their fulfillment in the birth of a son, a very special son.

As we grapple with our own unfulfilled yearnings and unmet needs, may we remember that the events of so long ago echo in our lives today. We still long for fulfillment; we still desire someone who will meet our needs. In Zechariah’s and Elizabeth’s blessing of their son John, the herald of the One to come, we see the answer to our own struggles. God will provide. God will send His Son.

Dear Lord, I confess that I am often impatient with the processes of this world. My resources, wisdom and power are so limited that I control very few of the things that happen in my life. I grow frustrated with the challenges and unexpected troubles that crop up so often. But when I think more deeply, I realize that these setbacks and circumstances can accomplish more to shape my character than having everything go my way. It is through such difficulties that patience, steadfastness and fortitude are forged by Your wise and loving hands. May I learn to wait on You, to hope in You, to trust in You, to delight myself in You and to unreservedly commit my ways to You. In Your Son’s name I pray. Amen.

Have you been waiting a long time with unfulfilled longings and unmet needs? Stop and think for a moment. How have those waiting years changed and shaped you for the better? Have you grown in prayerfulness? In strength? In long-suffering? In compassion? How has waiting affected your life positively? Come share your thanks for the good things God has done through difficulties on our blog! We would love to hear from you! ~ Devotionals Daily 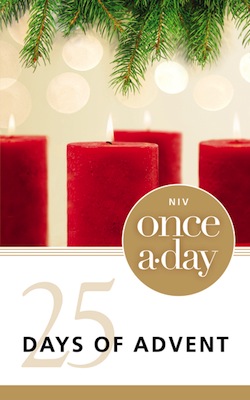