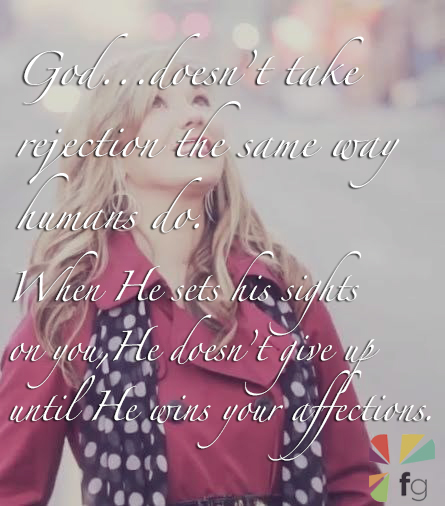 Sometimes I am convinced that God allows us to fall into certain situations just because He gets a kick out of watching us get all tangled up in fiascos of our own making. He can tune in to just about any random day in my life and find something to tickle His funny bone, and spring 1998 must have been sweeps season, because I found myself in one unbelievable dating disaster after another.

After my breakup with Matt, I was back on the dating scene for the first time in two years, and it wasn’t pretty.

First there was the guy who was obsessed with bodybuilding, to the point where he had an actual life-size and extremely creepy cutout of Arnold Schwarzenegger in his dorm room. You can imagine my horror when I walked into Body Builder’s room one evening to watch a movie and a glistening, sweaty, flexing-in-a-diaper Arnold was glowering at me from across the room. I screamed and darted back out the door, and not too long after, out of the relationship all together.

Then there was the guy who was so handsome, he bore a strong resemblance to James Dean. Yep, he very quickly won my heart when he approached me one night at a get-together I attended with friends and batted those baby blues in my direction. Unfortunately, “JD” lacked the coolness and smooth confidence of the real James Dean, and turned out to be the most insecure guy I had ever met. I discovered this one night as we were flipping through the channels and paused on a music video of a musician I thought was attractive. I made the mistake of telling JD not to turn the channel so I could see the rest of the video, and the way he looked at me, you would have thought I suggested he sprout wings and fly out of the room so I could be alone with the music video guy.

Around that time, two divine appointments happened in my life. The first came in the form of a coworker. I had started working for Mothers Against Drunk Driving in fall 1998 as a special projects assistant. MADD was looking to reach a younger audience with their message and hired me to help create a peer group of teens called Youth in Action to help combat the problem of underage drinking in high schools. One day at a national training in downtown Nashville, I met a young man who worked for MADD headquarters in Texas. His name was Scott, and he was so on fire for God that joy and peace oozed from him. As I jokingly shared some of my recent dating horror stories with him, lightheartedly complaining about modern dating, Scott turned to me with an earnest look on his face.

“You know there’s a better way, right?” he asked.

“What? You mean online dating?” I joked. Online dating had just started to take off around that time, and I was highly skeptical of it. (Confession – I still kind of am.)

“No,” Scott said. “I mean that God already has someone picked out for you, and you don’t have to frantically search for him. When it’s right, God will cross your paths.” His answer surprised me, to say the least.

While I certainly believed in God and said my prayers (fairly regularly), I wasn’t so sure He was overly concerned with the status of my love life.

But as Scott continued to talk and share his story, my eyes began to be opened to the fact that God cares about every aspect of our lives, especially about the people we choose to spend our lives with.

The second divine appointment came from an unexpected place: my mother. She had started attending a new church a few months prior and absolutely loved it. It had reignited her faith in a way that she hadn’t experienced in years. She called me almost every Sunday to invite me to church, and every Sunday I either turned off the ringer, rolled over and went back to sleep, or made up some excuse about why I couldn’t go with her.

A person can always find excuses not to change, but the thing about God is that He doesn’t take rejection the same way humans do. When He sets His sights on you, He doesn’t give up until He wins your affections. He is the ultimate Dream Guy. And so He kept prodding my mother to invite me to church, she kept inviting, and eventually I ran out of excuses.

I remember thinking I would go one Sunday, just to get my mom off my back. Off I went with my mom that day to church, where I spent much of the service looking around in awe. This wasn’t just church, this was Church 2.0. The only churches I had attended as a child were old-school, traditional churches that weren’t exactly known for coloring outside the lines. But this church was different. It was alive. It was electric. People were joyfully raising their hands to the music, tears were streaming down faces, and the music was lively and contemporary and unlike any church music I had ever heard. It felt more like I was at a rock concert than a worship service. It both unnerved me and intrigued me. The joy in the room was palpable. After the service, the pastor and his wife came right up to me and enveloped me in a huge hug.

“It’s so nice to meet you!” the pastor said warmly. “Your mom has told us all about you. We were hoping we would get to meet you someday!”

Within minutes they were explaining their home groups and singles ministry and campus Bible studies to me. It was a little overwhelming, but I also felt something in my spirit responding.

After my conversation with Scott at the MADD training, I had gone home and said a very specific prayer to God: “Dear Lord, if there is something to all this, and if there is a greater purpose for me and a mate already picked out for me, please send me a sign. Please help me find a church home and a church family. It’s not something I’ve ever asked for before, but I feel like this is the direction You are calling me in. So please, just give me a nudge when I’ve found the place where I fit.”

I had spent so much time in my life feeling like I didn’t quite fit, and at age twenty, I finally found a place that was welcoming me with open arms. No conditions. No expectations. No standard of perfection I had to meet. I didn’t have to audition. I didn’t have to go through an interview process. I didn’t have to be “picked.” I was already chosen. It was one of the most peaceful, safe feelings I had ever experienced, to be brought into a fold of people who knew nothing about me but accepted me anyway.

And as I began to look around, I saw people of all races, all backgrounds, and all walks of life. There were girls with pink hair and boys with Mohawks and athletes and brainiacs and older couples and children. No two people were the same. It was a wonderfully eclectic blend of imperfect humanity that had one thing in common: they loved God.

My one visit turned into two, which turned into three, which turned into me becoming a member of the church about six weeks after I started attending. More proof that one seemingly insignificant decision can alter the course of your entire life. God had created a perfect storm in the area where He knows I struggle the most – relationships – that resulted in me trading my dependence on them for dependence on Him. How amazing is it that He cares so much about our lives that He’ll use something as silly as a series of bad dates to set His bigger plan in motion?

Excerpted with permission from I Have Never Been to Vegas But My Luggage Has by Mandy Hale, copyright Thomas Nelson, 2014.

Have you experienced what Mandy did – that God will use anything to get your attention? What fiascos has He used to set His bigger plan in motion in your life? Leave a comment! We’d love to hear from you! 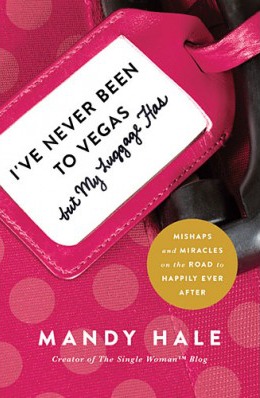