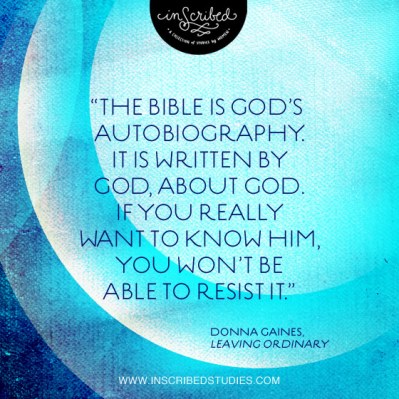 God desires an intimate relationship with each of us. But, we wonder, how can a person have such a relationship with a holy God? It is one thing to be in awe of Him, but quite another to be intimate with Him. In Leaving Ordinary, Bible Study teacher and author Donna Gaines delves into this issue by exploring the notion of extraordinary prayer. How does Scripture define “intimacy” as it relates to our relationship with God? God gave the Israelites the tabernacle, a temporary and portable dwelling for His glory, and taught them how to approach and worship Him before He led them to their reward—the promised land. Using the tabernacle and its articles (altar, lampstands, etc.) as a guide, Donna teaches readers how to interact with God in that secret place of true intimacy that leads to worship. We hope you enjoy this exclusive excerpt from Donna’s Leaving Ordinary as you pursue a more intimate relationship with God.

I will meet with you there. I will speak to you from above the seat of mercy between the two winged creatures that sit atop the covenant chest. From there, I will speak to you about all the commands and instructions I have for the people of Israel. – Exodus 25:22

God gave Moses His commands for the people when he was on the mountain. God’s people were to be set apart from the other nations. Different. Distinct. Unique. They were not to worship the pagan gods of the other countries, they were to worship the one true God. Thus, God gave them commands to be obeyed. He demanded an exclusive relationship with them. As my friend Joni Shankles so beautifully stated,

“Intimate relationships are exclusive by nature. Choosing to be intimate with God means you are excluding other things, other people, and other pursuits.”

God set His people apart through His relationship with them. He also gave them commands to be followed and then gave them the design for His dwelling among them – the tabernacle. Along with the commands came blessings for obedience and curses for disobedience (Deuteronomy 28-30). God demanded obedience from the heart – the place of intimate relationship.

It is interesting to note that God gave the people only ten commandments, but chapter after chapter of instructions for His dwelling and how His people were to live with Him in their midst.

The tabernacle was not just a place for God to dwell. It was a place of worship that was based on relationship.

God had ordered the Israelites, who were packing up and preparing to depart from Egypt, to ask their Egyptians neighbors for “articles of silver and articles of gold, and clothing; and the Lord had given the people favor in the sight of the Egyptians, so that they let them have their request. Thus they plundered the Egyptians (Exodus 12:35-36). The Lord commanded them to ask of the Egyptians the very things that He would later require. The Israelites obeyed, even though they didn’t understand. I am certain they may have thought this plunder way, in effect, payment for their enslavement. Yet, God had a higher purpose for its use.

God’s plan for the gold and silver was given to Moses in extensive detail. As Dr. Olford, author of The Tabernacle: Camping with God, noted: “It is most remarkable to discover that no less than fifty chapters in the Old and New Testaments are devoted to the construction, ritual and priesthood of the Tabernacle and the meaning of them all.” In the book of Hebrews, from the King James Version, we are told that the tabernacle and the priesthood were the “shadow of heavenly things” (Hebrews 8:5) and “the figures of the true” (Hebrews 9:24). Thus, God was very specific about His instructions and the command to follow exactly what He instructed in creating the tabernacle and its articles.

When the time came for constructing the tabernacle, “all the Israelites, both men and women, who felt moved to provide the material needed to do this work, brought these offerings willingly and set them before the Eternal One exactly as He had instructed Moses” (Exodus 35:29). The God selected men and filled them with His Spirit to enable them to have the skill needed to perform the work of an engraver and designer for the articles.

God told Moses to be sure to do exactly what He had shown him on the mountain. In his book The Way into the Holiest, F. B. Meyer notes the significance of the revelation on the mountain:

But, in addition to the minute description thus given, there appears to have presented to the mind of Moses some representation of the things which he was bidden to construct. It was as if the eternal realities which had dwelt forever in the mind of God took some visible shape before his vision. The unseen became visible. The eternal took form. A pattern was shown him. He trod the aisles of the true Tabernacle. He beheld the heavenly things themselves. And it was after this pattern that he was repeatedly urged and commanded to build.

If we look for it, we can see a foreshadowing of the cross of Christ in the design and placement of the articles of the tabernacle. The tabernacle was divided into three parts: the outer court, and the inner court, which was divided into two – the Holy Place and The Holy of Holies was the innermost section, where God’s presence dwelled.

We know from the New Testament that our bodies are temples of the Lord. We, too, are divided into three parts – spirit, soul, and body (1 Thessalonians 5:23). God’s presence through His Holy Spirit dwells in the innermost part of our being – our spirit.

As we work our way through the tabernacle, we will discover how each part not only points to a heavenly reality, but also depicts and points to Christ. “Christ is the perfect Tabernacle. In Him is fulfilled all that the Tabernacle in the wilderness typified and prefigured.”

Just as the priests prepared themselves to enter the presence of the Lord, we should prepared ourselves before entering His presence. Before we pray, we should prepare our hearts. Prayer is such a miracle! That the Creator of the universe desires to commune with us is a concept almost too good to be true. And yet, we see in Scripture God’s desire to commune with and be known by His people. How can we, who on this side of the cross have been invited in, not take advantage of this great opportunity and privilege?

My favorite woman in the New Testament is Mary of Bethany. She is seen only three times in Scripture, but all three times she is at Jesus’ feet. In the first encounter with her, in Luke 10, the Lord defends her when her sister, Martha, rebukes her.

Martha was frustrated that she had been left in the kitchen to do all the work by herself. Mary was sitting with the disciples at the feet of Jesus, listening to Him teach. Jesus told Martha she was anxious and concerned about so many things, “but only one thing is necessary, for Mary has chosen the good part, which shall not be taken away from her” (Luke 10:42).

The “one thing” Mary had chosen was time with Jesus. When I make my time with Christ the priority of my day, I am choosing the “one thing” that Christ commends. When Christ through His Spirit speaks to me and reveals truth through His Word, I am changed. Not only am I changed, but the truth He has revealed can never be taken away from me.

The last time we see Mary with Christ, He is having a meal in the home of Simon (John 12:1-11; Mark 14:3-9). Mary, who was also present at the meal, did something unexpected and very extravagant. She took a vial of perfume worth a year’s wages and anointed Jesus for burial. How did she know? No one else did. Mary had chosen and Christ had revealed. He still reveals Himself to those who choose.

Being with Christ is the “one thing” that must be chosen. It is an act of the will but also a decision that must be fought for.

When you set aside time to be with Christ in His Word and in prayer, the enemy will put up a fight. As a great man of prayer Samuel Chadwick stated, “The one concern of the devil is to keep the saints from praying. He fears nothing from prayerless studies, prayerless work, prayerless religion. He laughs at our toil, mocks at our wisdom, but trembles when we pray.

The truths you hear when someone speaks, or even when you read a book, are often forgotten. But when God speaks to you, that truth becomes a part of you and you will not forget it. Revealed truth changes the way you think and conforms you to the image of Christ. 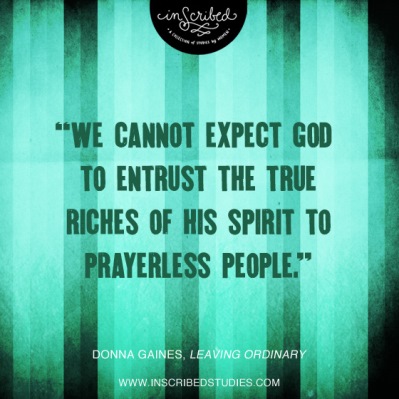 Jesus said that He would send the Holy Spirit, who would teach us everything we need to know (John 14:26). Are you allowing Him to teach you as you read God’s Word? What has God been teaching you? What new truth has He revealed?

Come join the conversation on our blog! We would love to hear from you! 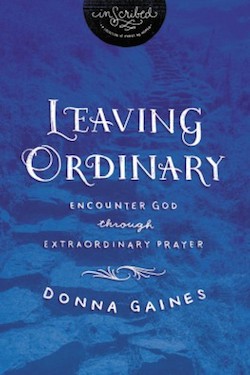