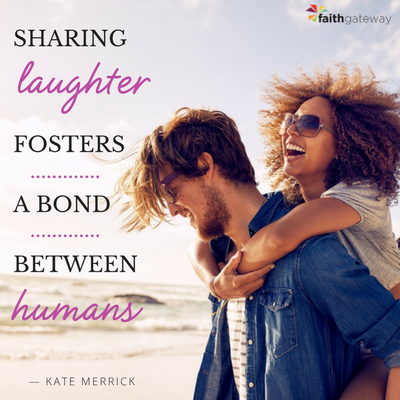 No, You Did Laugh

The finest snippets of life are those in which laughter is at the core — events meaningful enough to be etched into our brains. Such times bring deep healing and shape who we become. They’re the kind we frame and display in a place of prominence, the ones we bring up around campfires for years to come, reliving the hilarity and the rapture.

Once in a while laughter simply overcomes you, coming from deep in your belly, the sound filled with joy and hope and enduring love. One of those times that I will never forget was the spring of 1997, when I was twenty-two years old. I had just gotten off work at Channel Islands, which I loved so much — the surf shop belonging to my then-boyfriend’s (now-husband’s) parents. It had been a long, hot day of folding T-shirts, hanging bikinis, making cute displays, and chatting up all the locals. Surf shops tend to be something of a hub for people who share a love for the greatest sport on earth. No, I’m not biased.

My boyfriend had called me on the landline at work and asked me to come down to the beach to watch the sunset with him. Sweet, but not entirely the usual. Our evenings normally consisted of surfing then gorging on burritos and ice cream. But no matter, it sounded fun! So, I went.

On the beach we held hands, we chatted, he chased me around with a dead jellyfish on a stick, and we were caught up in the bliss belonging to two young people who didn’t have a whole lot of life under their belts yet. Unaware of what the future would bring, we were completely in the moment. We got to where the waves began to break, and he suggested we sit down in the sand.

At the moment the sun sank below the horizon, he turned to me and said, “Katie, you know I love you, and I want you to be my girl. Will you marry me?” Oh, my heart. I knew something was up his sleeve! That’s when it happened.

The laughter began deep in my belly and bubbled out of me. It spilled over my lips and down the front of my shirt and all over the sand. It flowed so freely, as if there were an endless supply of joyful noise all bound up inside me. More and more and more came, and soon tears came with it — giving motion and texture to the joy, the abandon of relishing in another’s love, the realization that someone wanted to give me his name, give me a home, give me a diamond ring to seal the whole delicious deal.

I laughed so much, so thoroughly, that my soon-to-be fiancé confusedly asked, “So? Will you?” I loudly proclaimed, “Yes! A thousand yeses!” No joke. If you need to throw up, do it now. But I loved it, every second of it. The pure laughter of freedom and love and happiness and the anticipation of more good to come. Sigh.

Then there are other times, when laughter seems completely inappropriate. I was at the funeral of a dear woman from our church about eight or nine months after Daisy died. She was a wonderful woman, very loved, a feisty little thing with a great sense of humor, which is why I don’t feel so bad about what comes next. During the service one of her daughters spoke about how being a mom sometimes requires doing the difficult thing. She shared a story about how excruciating it was to give her own young daughter painful treatments for leukemia, then linked the idea to a time when her mother had helped her off a ski lift the hard way in order to save her from further danger.

Right at that moment, my husband leaned over and whispered into my ear, “Thanks a lot, Mom, for shoving me off the lift.” I was struck with the funny stick so hard, there was no hope. I yukked and yukked with shoulders shaking and tears streaming, all the while praying to remain unnoticed — which is virtually impossible in a setting like that. I hid my head in my husband’s shoulder while we both had an absolute letdown of emotion in the form of uncontrollable laughter.

Apparently, we hid this fact well. A close friend of mine brought over a box of tissues, thinking the leukemia thing was dredging up grim thoughts from our own daughter’s treatment. Honestly, that had passed me right by, and I believe God allowed us to find humor in an impossible situation for the good of our hearts.

By the way — super sorry, dear deceased friend, for cracking up at your funeral. And to any friends who were at the same funeral and are just now discovering the truth about my “breakdown”? Well, I hope you still love me. Survival mode, y’all.

Laughter is the strangest thing. It can be healing, literally. It can inject an impossibly terrible situation with a whoosh of fresh air. Sharing laughter fosters a bond between humans. In its purest form it brings life. When a baby laughs, it’s like no other sound. I’m sure 99 percent of you have watched the YouTube video of all those babies strewn over their sweet mama, laughing simultaneously. Put that on repeat, please.

I even pay money to laugh. (Thank you, Tim Hawkins, for getting me through cancer, my firstborn’s puberty, and having a toddler at age forty — I own all your DVDs.) Sometimes laughter seems inappropriate, but it is the only thing that can get you through a rough patch. Many times I found myself making jokes about vomit and edema in the hospital with seven-year-old Daisy. Pranking the nurses and doctors became the highlight of some pretty miserable days. I mean, what else are you going to do? I’m convinced laughter is key to survival.

I’ve laughed a lot in my life, lots of happy and free laughter, throwing my head back and busting a gut. But as the years have gone by and I’ve experienced more tough times, the lighthearted atmosphere has shifted. I have seen myself spewing a different kind of laughter: a bitter, hardened laughter, like a waste product of a sick heart. And it’s ugly. It came poking its head out when I was unaware it was even there. Like termites hidden in wood that was once healthy.

For the past six years I’ve dwelt in ashes, the acrid smoke of desolation all around, and in dark times of reflection I have seen myself mocking the very idea of finding joy through all the sorrow. Bitter laughter has been sneaky, has hidden itself, and like spiderwebs appearing stealthily in the corners of your closet, it has come to inhabit the corners of my heart. Slowly but surely, this fractious and unwelcome guest has settled down deep. It caught me by surprise and threatened to become a way of life for me — one of cynical unbelief in God’s goodness, of rancor at the horrors I’ve suffered.

Sometimes seeing ourselves clearly in the mirror is a bummer experience. If the last time you looked in the mirror your makeup was fresh and your hair was rocking, you feel pretty good about yourself. But if the reality is that you looked like a raccoon and had cilantro in your teeth, well then, you have a problem. And it takes either a close-up mirror or a true friend to let you know when there’s a bat in the cave (girlfriend’s code for “check your nose”).

Recently I got a little spiritual mirror check. At first glance, I was generally doing pretty well — cruising right along, loving Jesus, raising babies. My faith in God, for the most part, hadn’t wavered; I still worshipped with a sincere heart and desire to hear him speak. But the barely there niggling feelings of bitterness had lingered in my subconscious. Little grudges had formed, jokes indulgently made only to myself. I had thrown away joy because of something I didn’t understand, because the answer to my most fervent prayer was a heavy, unalterable, ghastly no.

I realized I was living life with the limp of one who has been injured but not correctly healed. All my nasty, grievous attitudes were feeding the bitter beast in me, and it manifested itself in snappish humor. I took everything personally, was easily offended, and used dry humor as my shield.

Every time I received “comfort” that turned out to be hurtful, it fed the secret monster just a bit, the monster that hid behind a veil of wisecracks. When my temper flared at other women who complained about their children, I made jealous jokes. My conversations at home often turned snarky, bringing morale a few notches down, allowing my beastly burden to swell. My husband wondered aloud where his wife had gone, and God began to show me the truth. I was playing the victim — the very thing I can’t stand in others — and I had been blind to it all along. Sin always looks better on us than on everyone else.

Slowly, gently, I awakened to this repulsive and sinister thing growing inside me. The mocking laughter, the defense mechanism, the vice for dealing with life. I thought, If I don’t believe God’s goodness for me personally, then I can’t be disappointed in Him. If I don’t ask Him for anything, then He can’t slam the door in my face again. It’s almost as if I was trying to save face, but whose face was I trying to save? That’s a question between me and the Creator, one that requires surrender and the flaying open of the heart. Give me some time on that one.

Two of the greatest words. In Ephesians 2:4-5 (ESV), we are given the beautiful words of the good news:

But God, being rich in mercy, because of the great love with which He loved us… made us alive together with Christ.

But God has not seen fit to let me wallow in my sadness.

But God has been bringing my darkness into the light.

But God has not been quiet to me, even after all the hidden places, the flippant jokes about my rotten lot in life.

But God has been generously offering to trade my sorrow for gladness, my confusion for peace.

God is gently, lovingly teaching me about laughter, about Himself, about life and death and goodness and pain and the future. He’s giving me ways to walk in peace, to be rid of bitterness, to be strengthened. Ways that have carried me through murky times and changed my days.

He’s using human experience and biblical women to show me truth in a new light, and it makes me want to laugh, makes me feel loved all over again. It reminds me that He is caring for my soul, and He is inviting me into deeper relationship.

Excerpted with permission from And Still She Laughs by Kate Merrick, copyright Kate Merrick.

Has bitterness settled in over your loss, your grief, your heartbreak? Are you laughing but in the sharp, hard ways of a person coiled up in anger and resentment? But God! God is with you friend, even in this, and He is generously offering to trade your sorrow for gladness, your confusion for peace. Come join the conversation on our blog! We want to hear from you! ~ Devotionals Daily