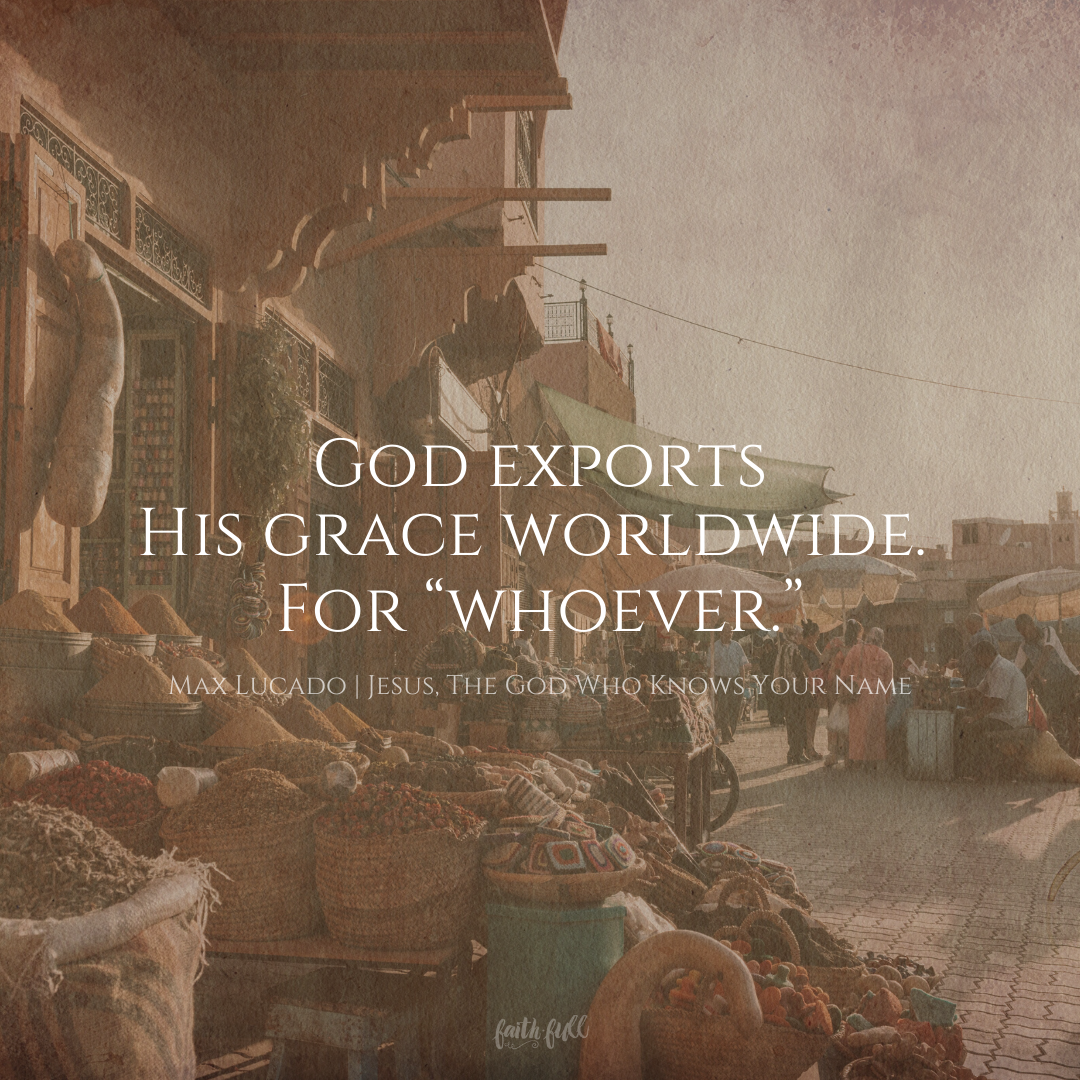 Whoever unfurls 3:16 as a banner for the ages. Whoever unrolls the welcome mat of Heaven to humanity. Whoever invites the world to God.

Jesus could have so easily narrowed the scope, changing whoever into whatever. “Whatever Jew believes” or “Whatever woman follows me.” But He used no qualifier. The pronoun is wonderfully indefinite. After all, who isn’t a whoever?

Whoever makes it clear: God exports His grace worldwide. For those who attempt to restrict it, Jesus has a word: whoever.

Whoever acknowledges Me before others, I will also acknowledge before my Father in Heaven. — Matthew 10:32

Whoever finds His life will lose it, and whoever loses His life for my sake will find it. — Matthew 10:39 ESV

Whoever does God’s will is my brother and sister and mother. — Mark 3:35

Whoever believes and is baptized will be saved, but whoever does not believe will be condemned. — Mark 16:16

Whoever believes in the Son has eternal life, but whoever rejects the Son will not see life, for God’s wrath remains on them. — John 3:36

Whoever drinks the water I give them will never thirst. — John 4:14

Whoever lives by believing in Me will never die. — John 11:26

Whoever desires, let him take the water of life freely. — Revelation 22:17 NKJV, emphasis added in this and the previous verses

Titus 2:11 assures us that “God’s grace that can save everyone has come” (NCV). Paul contended that Jesus Christ “sacrificed Himself to win freedom for all mankind” (1 Timothy 2:6 NEB). Peter affirmed that “it is not His [God’s] will for any to be lost, but for all to come to repentance” (2 Peter 3:9 NEB).

We humans aren’t prone to this “whoever” policy. We’re prone to pecking orders. We love the high horse. The boy over the girl or the girl over the boy. The affluent over the destitute. The educated over the dropout. The old-timer over the newcomer. The Jew over the Gentile.

An impassable gulf yawned between Jews and Gentiles in the days of the early church. A Jew could not drink milk drawn by Gentiles or eat their food. Jews could not aid a Gentile mother in her hour of need. Jewish physicians could not attend to non-Jewish patients.1 No Jew would have anything to do with a Gentile. They were unclean.

Unless that Jew, of course, was Jesus. Suspicions of a new order began to surface because of his curious conversation with the Canaanite woman. Her daughter was dying, and her prayer was urgent. Yet her ancestry was Gentile. “I was sent only to help God’s lost sheep — the people of Israel,” Jesus told her. “That’s true, Lord,” she replied, “but even dogs are allowed to eat the scraps that fall beneath their masters’ table” (Matthew 15:24, Matthew 15:27 NLT).

Jesus healed the woman’s daughter and made His position clear. He was more concerned about bringing everyone in than shutting certain people out.

And the woman everyone was gossiping about. By the time Jesus met her, she was on a first-century version of a downward spiral. Five ex-husbands and half a dozen kids, each looking like a different daddy. Decades of loose living had left her tattooed and tabooed and living with a boyfriend who thought a wedding was a waste of time.

Gossipers wagged their tongues about her. How else can we explain her midday appearance at the water well? Other women filled their buckets at sunrise, but this woman opted for noon, preferring, I suppose, the heat of the sun over the heat of their scorn.

Were it not for the appearance of a Stranger, her story would have been lost in the Samaritan sands. But He entered her life with a promise of endless water and quenched thirst. He wasn’t put off by her past. Just the opposite. He offered to make music out of her garbage, and she accepted His offer. We know because of what happened next.

Many Samaritans from the village believed in Jesus because the woman had said, “He told me everything I ever did!” When they came out to see Him, they begged Him to stay in their village. So He stayed for two days, long enough for many more to hear His message and believe. Then they said to the woman,

Now we believe, not just because of what you told us, but because we have heard Him ourselves. Now we know that He is indeed the Savior of the world. — John 4:39-42 NLT

The woman on the margin became the woman with the message. No one else gave her a chance. Jesus gave her the chance of a lifetime. He came for people like her.

Whoever. It’s a powerful word. It includes all of us. All of us. You. And me. Come share your thoughts on Jesus’ outrageous welcome mat: whoever! We want to hear from you.

And, join us for the Jesus OBS! We’re starting March 2nd! Are you in? ~ Laurie McClure, Faith.Full 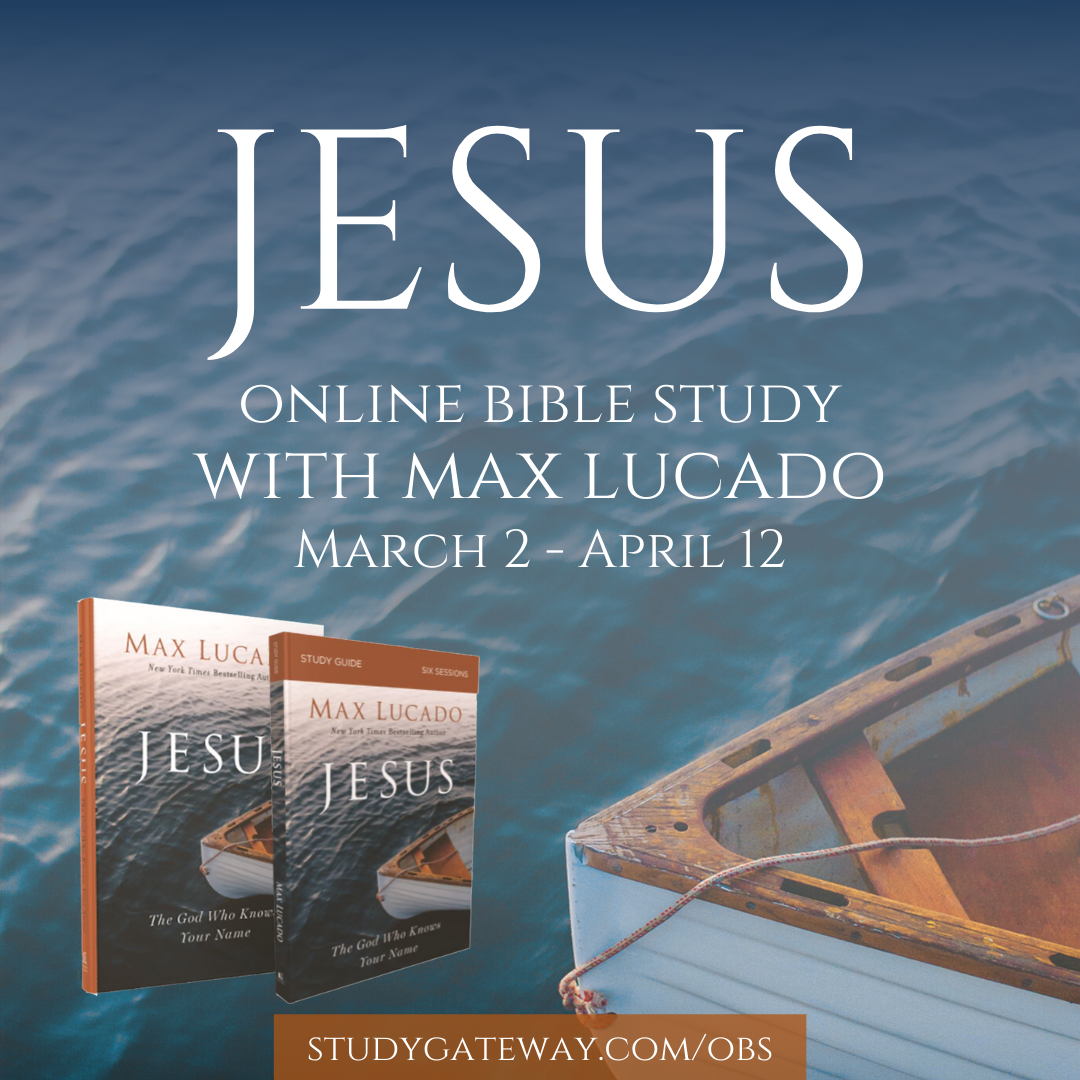