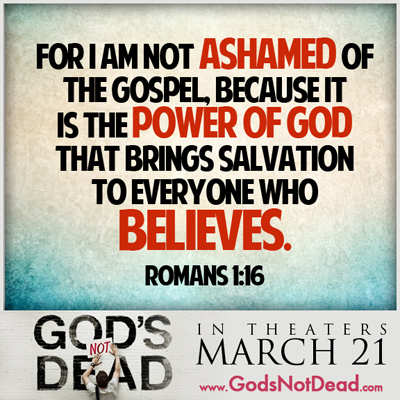 Last weekend marked the opening weekend of God’s Not Dead, a film directed by Harold Cronk and released by Pure Flix Entertainment. The film introduces us to Josh Wheaton (Shane Harper), a present-day college freshman and devout Christian who finds his faith challenged on his first day of Philosophy class by the dogmatic and argumentative Professor Radisson (Kevin Sorbo). Radisson begins class by informing students that they will need to disavow, in writing, the existence of God on that first day, or face a failing grade. As other students in the class begin scribbling the words “God Is Dead” on pieces of paper as instructed, Josh find himself at a crossroads, having to choose between his faith and his future.

God’s Not Dead opened with a successful weekend box office at $9.24 million. Here are what some critics have said about the film:

It’s shaping to be a year in which Hollywood finds religion, and God’s Not Dead delivered that message powerfully. — Susan King, Los Angeles Times

God’s Not Dead is a box office winner! — USA Today

Our exclusive excerpt today, published here with permission from Thomas Nelson, comes from the book that inspired the movie of the same title, God’s Not Dead, written by Rice Broocks. The book God’s Not Dead was written to help readers develop “a faith that is real and credible—and strong enough to help others find faith in God.” We hope that from this excerpt, you will be encouraged and challenged to think more critically about your faith and that God would use your faith to impact His Kingdom. Visit the movie website to find a theater near you.

What divides us is not science, we are both committed to science, but our worldviews. No one wants to base their life on a delusion, but which is a delusion? Christianity or atheism? — John Lennox

When a Man stops believing in God he doesn’t then believe in nothing, he believes anything. — attributed to G. K. Chesterton

I was in my third year of college when my atheist older brother, Ben, decided to try to talk me out of my Christian faith. I probably looked like an easy target. I had not been a Christian that long, and Ben was in his third year of law school at Southern Methodist University in Dallas. He was at the top of his class, already had a master’s degree in counseling, and had been sharpening his disdain for Christianity for a while.

We arranged to meet over a weekend at my parents’ house in Dallas. Ben prepared as if he was going to be trying a legal case, studying the Bible to get the ammunition he needed to blow me out of my new faith. He told one of his classmates, “I’m going home to get my little brother out of this born-again thing.” He showed up with his prepared questions and finely tuned challenges, anticipating anything I might say. He was confident he could get me to abandon this whole notion of faith in God and belief in Jesus Christ.

I’d like to tell you that I had brilliant, learned answers for everything he brought up. But I never had the chance to respond. As I listened to and addressed Ben’s doubts simply, the truth of God’s Word began to soften his heart. I could see he was doubting his doubts. There was finally a moment when I told him, “Ben, it’s not what you don’t know about God that’s keeping you from believing; it’s what you do know. You know He is real and you know He is holy [meaning pure].”

The apostle Paul wrote that people “suppress the truth in unrighteousness” (Romans 1:18). The reason? They don’t like God’s rules. The problem with this is that it’s like trying to hold a beach ball under the water: the harder you push truth down, the more forcefully it resurfaces.

This was definitely what my brother was doing. He was trying to escape from the pangs of conscience that were convicting him of his behavior.

At the end of the day—the day on which he intended to talk me out of my faith—I baptized Ben in a swimming pool. Not long after he came up out of the water he said, “I don’t think you answered all my questions, but I think I was asking the wrong questions.” Today, Ben is a successful trial attorney in Austin, Texas, and a formidable witness for Christ.

That weekend thirty years ago was a turning point for both Ben and me. He became a believer in Jesus Christ while he was trying to talk me out of “this born-again thing.” And since that day, I’ve devoted my life to getting people out of “this atheist thing.” I work primarily among university students around the world, and I have been joined by thousands of others who have found that faith in God is both spiritually revitalizing and intellectually satisfying. We’ve also seen the opposite: that atheism doesn’t satisfy a man’s heart or mind.

The End of Faith?

More than forty years ago, the cover of Time magazine asked, “Is God Dead?” The writers were reflecting upon the famous claim made by nineteenth-century German philosopher Friedrich Nietzsche that God is dead. Other voices from that century raised the same issue in different words. Followers of Charles Darwin had suggested that belief in God would soon disappear from a scientifically progressive society. Karl Marx had said that religion is a drug, “the opium of the people.” In 1999, The Economist magazine published an obituary for God.

But a funny thing happened on the way to the funeral. In 2009, the senior editor of The Economist cowrote the book God Is Back, which served as a retraction of the 1999 article. Christianity is experiencing astounding growth in Africa, Asia, and Latin America. In Europe, where there has been generations of religious decline, there are encouraging signs of spiritual growth, particularly in places such as London, Berlin, and Dublin that have a deep history of faith in God. This is due to an intellectual renaissance as well as a spiritual one.

People are awakening from the dogmatic slumbers of secularism and naturalism. And in America the overwhelming majority still acknowledge the existence of God, and the nation is beginning to witness a spiritual awakening among youth. In spite of the fact that God has been virtually banished from the classroom, university and high school students are questioning what they’ve been taught—the naturalistic dogma that the universe and life are merely the product of blind, random forces—and they are acknowledging that there is rational grounds for believing in a Creator. The thick fog of unbelief that has hovered over academia is starting to burn off as more and more evidence for an intelligent Creator surfaces.

With this rise in faith worldwide has come a corresponding response. Over the last decade the secularist camp set out to stem the tide of renewed faith. The term new atheists has been given to a group of skeptics who have sought to revive the arguments against God and repackage them for a new generation. Ironically, very little is new about these atheistic arguments. In fact, the success of their claims is mostly due to the fact that the theistic responses to their claims—which are the truth about God—have not been widely circulated.

A generation ago, C. S. Lewis composed a set of lectures that were broadcast over the BBC and were transcribed and published as Mere Christianity. Formerly an atheist, Lewis realized that he had to ignore too much evidence to maintain his unbelief:

If you are an atheist you do have to believe that the main point in all the religions of the whole world is simply one huge mistake. If you are a Christian, you are free to think that all those religions, even the queerest one, contain at least some hint of the truth. When I was an atheist I had to try to persuade myself that most of the human race have always been wrong about the question that mattered to them most. — C.S. Lewis

The arguments atheists use against God quickly disappear like a mirage when they are answered by learned believers such as Lewis. Atheists claim that the universe isn’t what you would expect if a supernatural God existed. All this death and suffering, they say, are plain evidence that a loving, intelligent God could not be behind it all. The truth is that God has created a world where free moral agents are able to have real choices to do good or evil.

If God had created a world without that fundamental choice and option to do evil, then we wouldn’t be having this discussion. God made a world where choices are real and humanity is affected by the choices of other humans. Drunk drivers kill innocent people. Some murder and steal from their fellow men. Though God gave clear commandments to humanity, we have for the most part ignored these directives. The mess that results is not God’s fault. It’s ours.

We are called to follow God and love Him with all our hearts and minds. This means we have to think and investigate. Truth is another word for reality. When something is true, it’s true everywhere. The multiplication tables are just as true in China as they are in America. Gravity works in Africa the way it does in Asia. The fact that there are moral truths that are true everywhere points to a transcendent morality that we did not invent and from which we cannot escape.

As Creator, God has placed not only natural laws in the earth but also spiritual laws. For instance, lying is wrong everywhere. So is stealing. Cruelty to children is wrong regardless of what culture you’re in or country you’re from. When these laws are broken, people are broken. Not only does violating these spiritual laws separate us from God, but it causes pain in our lives and in the lives of those around us. The big question becomes, what can be done about our condition? When we break these spiritual laws, whom can we call for help? How can we be reconciled to God as well as break free from this cycle of pain and dysfunction? 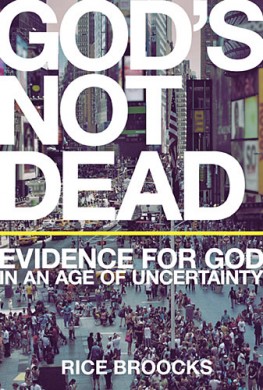