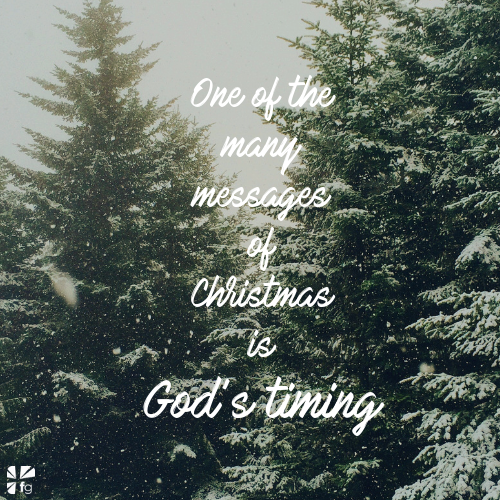 In the Fullness of Time

But when the fullness of the time had come, God sent forth His Son, born of a woman, born under the law. — Galatians 4:4

God often does the most extraordinary things in the most ordinary ways. Sometimes His acts are clearly extraordinary — like the burning bush where Moses encountered Him (Exodus 3:1-6). But other times, they are so ordinary their significance is only gradually realized — like the birth of a Child in a stable in Bethlehem (Luke 2:1-7).

There is no exact reason given in Scripture for the timing of Jesus’ birth. The apostle Paul said it happened “when the fullness of the time had come.” As for location, it seems a comparison was at work: King David had been born in Bethlehem, and Jesus would be the “Son of David.” And a contrast: Bethlehem’s small stature in Judah would be contrasted with Jesus becoming the “Ruler in Israel” (Micah 5:2). In hindsight, we might have picked a different time and place for the Son of God to enter the world — just as we often question the times and ways God works in our life.

One of the many messages of Christmas is God’s timing.

Just as God sent His Son into the world in a seemingly “ordinary” way, so He works in our lives with the same purposefulness. As you celebrate Christ’s birth, remember that every work of God is extraordinary — including the times and ways He acts in your life.

“But you, Bethlehem, in the land of Judah, are not the least among the rulers of Judah; for out of you shall come a Ruler who will shepherd My people Israel.” — Matthew 2:6

All of us have ideas about the future, ideas that range from a hunch to extremely confident depending on the situation. But nobody knows the future with 100 percent certainty. In fact, Scripture warns against predicting the future with certainty that borders on arrogance (James 4:13-17). But when Herod asked the Jewish priests and teachers where the Christ child would be born, they didn’t hesitate or equivocate:

In Bethlehem of Judea, for thus it is written by the prophet. — Matthew 2:5

They were certain He would be born in Bethlehem. And why were they so certain? Because God had told the prophet Micah. They believed that God knows the future and could reveal that knowledge to His prophets. To quote the old saying, “God said it, we believe it, and that settles it!” The priests and teachers were right, of course. Jesus was indeed born in Bethlehem, just as the prophet had written hundreds of years before it happened. The Christmas lesson from this event is simple, and yet too often we tend to forget its message:

If you are anxious about something in your future, don’t be. God knows what you don’t know and will reveal it in good time. And you can trust Him.

We may question the way God works in our lives and we may struggle with His timing, but He is the only One who knows the whole story of history from beginning to end. The Lord holds the future in His hands (Isaiah 46:8-10)! His Word is true. His is faithful and good. We can rest in His omniscience. God chose the perfect time and place for Baby Jesus to be born and He’s working just as purposefully in your life, too! Come join the conversation on our blog. We want to hear from you! ~ Devotionals Daily