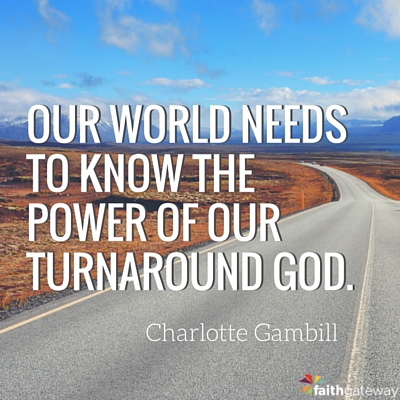 We need to understand our turnaround God because He speaks from a turnaround perspective. He may ask for actions that make no apparent sense to where we are currently living but make total sense for where we will be going. Have you ever felt God ask you to do something that seemed to make no sense? Maybe He asked you to sow financial seed when you were in a financial crisis. Perhaps He asked you to take on a new business venture when you were already stretched with your current business. Or as a parent God asked you to include more people into your already overstretched family.

At times, God’s counsel can seem insensitive or out of touch, so we misunderstand or even reject what we hear from God.

I remember the day my husband, Steve, and I went to what we thought was a regular doctor’s appointment. We had gone to receive news of our recent test results. We entered the room laughing and chatting with the doctor to find ourselves only moments later sat in complete silence at the news we had just received. My test had shown that I might not be able to conceive a child. Reeling from the casually delivered news, Steve and I left the office with our world now rocked and our faith about to be tested. During the next few months, we experienced a variety of emotions trying to seek God in this situation.

Then one day amid our tears we sensed God asking us to do something that seemed ridiculous. We felt God instruct us to throw baby showers for other people in our church who were pregnant; some of the people we barely even knew. I didn’t feel like celebrating what I had been told I couldn’t have, but I had to come to the realization that God was not being cruel to me.

He was asking if I believed that He could turn anything around. If I did, then did that include my barrenness?

Though I was unsure how God would bring about our miracle, I first had to start acting as if I believed God could provide a miracle. In my disappointment I had closed down every avenue for God’s provision. I had closed my heart to the many ways in which this barrenness in my life could be removed. Therefore, I needed to start acting in accordance with my future and not my present.

This experience brought a new realization of why God would say in Isaiah 54:1:

Sing, barren woman, you who never bore a child; burst into song, shout for joy, you who were never in labor; because more are the children of the desolate woman than of her who has a husband.

In this verse, God required an action that would begin the turning. By singing and shouting for joy, the barren woman was lining up with the promise and moving away from the problem. While you are singing, you can’t be complaining, questioning, or moaning. God wanted the barren woman to hear a different sound. God wants all His people to sing in the struggle because they know barrenness is not the end, but just the starting point of their turn.

Jesus loved people. Yet if you always want His love to be expressed within your own personal levels of your sensitivity, you may feel let down. Jesus was criticized in the way He performed miracles, the days on which He would carry them out, and to whom He would extend them. The Bible is full of stories where God’s answers seemed insensitive, where a prophet’s behavior looked more crazy than sane, and where Jesus’ ministry seemed careless and wasteful. One time, a prophet asked an influential ruler to wash in a dirty river, an instruction that was both disrespectful and insensitive to the ruler’s position in the community (2 Kings 5). The prophet Elisha instructed a woman with nothing to go and find more emptiness that she would be required to fill (2 Kings 4). God told a starving widow who was about to use her last handful of flour and oil to feed her son a last meal to take those ingredients and feed a hungry prophet instead (1 Kings 17).

Turnarounds by nature are radical; they bypass nice and sensible, they freak out the orderly, and they do not line up with agendas. But turnarounds reveal our miraculous Savior to our messed-up world.

Isaiah 54 continues to unfold God’s counsel as He instructs the desolate to enlarge, stretch, expand, and advance (v. 2). God does not want merely a slight improvement for His people but a complete turnaround. We have to be careful that we don’t downsize God’s ability and become satisfied too easily. I know how tempting it can be to take a small success as the ceiling for what God wants to do. We are grateful for the two or three we have reached, but we can’t allow that to become the capacity level at which we settle when God has the nations in His heart. We say size doesn’t matter, but actually it does because we should be seeing people added to His church daily. We have to be careful not to downsize the Great Commission to one that is more manageable.

On too many occasions, I have allowed a sensible theology that said, “When the money comes in, then we will go out; when the right people join our ministry, then we will advance to reach more people.” The enemy loves sensible planning, as it is no threat to his kingdom. If you downsize yourself, the enemy will become involved in your ministry, sending you more problems to manage and more people to help you keep things tidy. Yet there is nothing about God that downsizes, and He certainly isn’t tidy! His strategies often do not seem sensible or His counsel logical.

God asked an elderly couple, who were ready for retirement, to have a baby. He instructed a stuttering shepherd to speak to Pharaoh and to deliver an entire nation. He told a boy on a hillside to leave the sheep and kill a giant. He chose a teenage girl to carry the Savior of the world.

God doesn’t downscale people; He super-sizes them. He removes their comfort zones and throws them into the unknown, where His capacity overshadows their ability and they participate in the turnaround ministry of the God they serve.

Jesus came to turn the world upside down in the three years of His public ministry. He called a group of young men, mostly made up of teenagers, to come help Him turn around an entire world. He asked them to leave the tranquil lake for the sea of hurting humanity. Jesus’ ministry was not safe; it was revolutionary. He came with miracles, not slight improvements — and often it was people’s willingness to believe in His turnaround power that determined whether they went away healed and whole.

Jesus could have seemed insensitive when He said to cripples, “Get up and walk!” or to grieving relatives, “Open the grave!” His methods were questioned, but His miracles always brought answers. Turnarounds are not polite or politically correct; they are not people pleasing or protocol appeasing. Jesus wasn’t trying to fit in; He came to turn things around. Throughout His ministry — in persecution, torture, misunderstanding, and betrayal — Jesus carried on undaunted, seeing a joy set before Him that would only be attained with a complete turnaround commitment. God sent us a turnaround Jesus and then He gave us the turnaround facilitator, the Spirit of God.

Do you need a turnaround in your life? Have you been praying audacious prayers for a radical breakthrough? If God asked you to go out into the unknown and uncomfortable would you be willing to go and do what He asked even though it was scary and uncomfortable? Come join the conversation on our blog. We want to hear your thoughts on our amazing, turnaround God! ~ Devotionals Daily