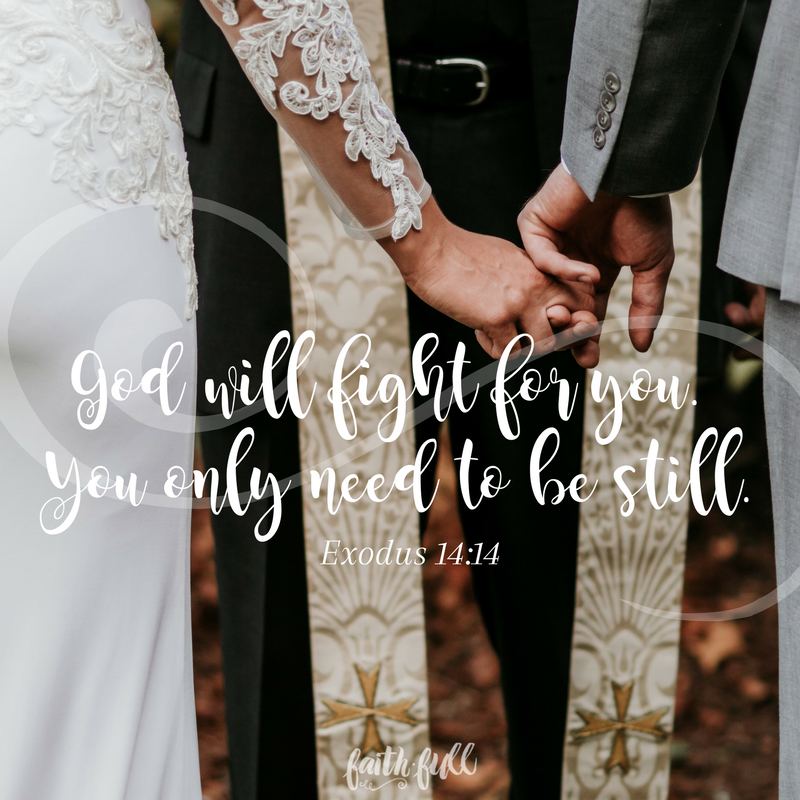 Success is not final, failure is not fatal: it is the courage to continue that counts. — Winston Churchill

One Step at a Time

Ashlee: One thing we have learned in twenty years of marriage is that a strong marriage comes from choosing to love the sometimes unlovable and choosing to move forward into healing and into the marriage you’ve hoped for. It took the first five years of our union to get there, but our prayer is that if you are not there yet, that God will accelerate your healing as you move forward together in His gracious love. You must first believe that God’s Word and promises are true.

The Israelites in the Old Testament had this same choice to make. If they were to move forward into their promised land they had to believe God. Moses led the Israelites out of their captivity, out of their past, and out of the bondage they endured for hundreds of years (Exodus 14). While they were camping by the Red Sea after leaving Egypt, Pharaoh, the king of Egypt, changed his mind and decided he didn’t want to lose them as his slaves. He sent his best chariots and officials after them.

As the Egyptians came closer to the Israelites, the people were terrified and complained to Moses saying, “What have you done to us by bringing us out of Egypt? Didn’t we say to you in Egypt, ‘Leave us alone; let us serve the Egyptians’? It would have been better for us to serve the Egyptians than to die in the desert!” (Exodus 14:11-12 NIV).

Don’t be afraid. God will fight for you. You only need to be still. — Exodus 14:14, paraphrased

But the Lord said to Moses, “Tell the Israelites to move on.” I can picture God saying this to Moses, and it makes me laugh. I imagine Him saying something like, “Why are you telling them to stand still, they need to move it? Hello, don’t you see that their past is coming for them? Tell them to move it!”

Then God instructed Moses to lift his rod to create a path for the Israelites through the Red Sea.

I first read these verses during the summer of 2004 when I was doing a Bible study by Beth Moore called Believing God. I felt like I was in a place similar to the Israelites’ and I had to make a decision — to stay where I was, to be still, or to move on. Since Clayton and I had come out of the desert time in our marriage in 2001, our relationship was thriving, and our marriage was growing stronger. In the winter of 2003 we both felt that our time in East Texas was ending and God was about to move us. We had no idea where that would be, but God had shared with each of us that we were going to move.

The only thing we knew to do was pray and trust God.

Clayton approached me one day and asked, “Hey, what do you think about driving to Houston one weekend and visiting Lakewood Church?”

I said, “Okay, but I hope you are not thinking that God is taking us there because I will never live in Houston. It’s hot and the traffic is terrible.” (Ha! I laugh at that now. It’s funny how many times I declare to God that I will never do “that” and I end up doing that very thing.)

Clayton graciously said, “Okay, we won’t move there, but let’s just go check it out.”

When we visited Lakewood a month later, we pretty much cried through the entire service. Everything Pastor Joel shared in his message was exactly what we had been sensing in our spirits about where God was leading us. We both felt a sense of peace. I knew God was telling us, “This is where I am planting you,” and Clayton knew it too. So now the question was, How is this going to happen? Are they going to offer us a job today?

Clayton and I began to pray, and when I say pray, I mean the face on the floor, crying out to God kind of prayers. We were believing to go somewhere nobody was asking us to go and thinking about leaving our extended families and all our friends behind.

During the next seven months we sold our house, moved in with Clayton’s parents, and visited Lakewood every month. At the end of seven months, without any hint of an open door, we started thinking that maybe we had missed God’s timing, so we bought a fixer-upper house and began the remodeling process. In the middle of our remodeling, Clayton received a phone call from Craig Johnson, the children’s pastor at the time at Lakewood, saying that he wanted to meet with us in Houston.

Clayton was excited, but I told him no! I was done believing, we had just bought a house, and we were in the thick of redoing it ourselves. I knew God had spoken to both of us back in January that we would be at Lakewood, but I was tired of believing and nothing happening. It was our first big fight in three years. I had my mind made up that we were staying where we were. I remember Clayton pleading with me to take this step of faith with him and drive to Houston to meet with Craig. I said, “No! I’m not doing it. I’ve got to go. I’m late for my Believing God Bible study!” And I slammed the door and left. (Oh, the irony!)

At that week’s Bible study, I heard Beth Moore teach on Exodus 14 in a little fellowship hall with a group of about thirty women. She told us how the Israelites wished they could go back when they were in between the Egyptians and the Red Sea, and how Moses said, “Stand still,” but God said, “Go!”

And the Lord says, “I have told you what to do and you are just waiting for a new answer!”

Beth said that when God gives us a word, He also empowers us to obey it. She said we need to hurry and obey. The longer we wait, the more that power wanes, and the weaker we become.

At the end of her message, she said, “If this is where you are at: a crisis of faith and indecision and you keep looking back and forth, but you know God is telling you to cross over and you want to make a commitment to do that, I want you to get on your knees now and I want to pray for you.”

I was at the back of the room and instantly fell to the ground and began to weep as she prayed. I knew God was telling me to believe Him and to go toward our promised land. I went home and told Clayton what God had revealed to me during Bible study and that I knew we were supposed to go to Houston. I asked him to forgive me for giving up and not believing.

We traveled to Houston to meet with Craig in July 2004 and I began to pray and believe God again. In November Craig called Clayton and offered him a job in the children’s ministry department and on December 30, 2004, on my thirtieth birthday, we moved to Houston to work for Lakewood Church. I am so glad I kept believing and moving forward in my faith.

I know it was our persistent faith that opened the doors to our promised land.

The first step in healing a hurting marriage or strengthening a healthy marriage is to believe that God’s Word and promises are true. Are you believing God for what He has said He would do for and through you? Come and share with us on our blog! We want to hear from you! ~ Faith.Full