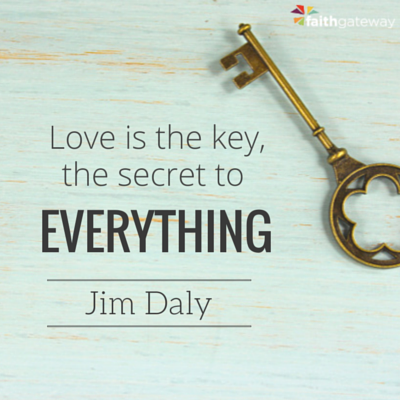 “You always hurt the one you love,” the old song goes, and it’s sadly true.

The moments will come when you hurt your kids. You’ll say something you shouldn’t have. You’ll do something that embarrasses them. You’ll break a promise.

None of us are perfect. And even when we say we’re sorry and admit our faults, we can’t erase what happened.

Our kids can hurt us too, sometimes accidentally and sometimes on purpose. They can lie. They can scream insults. They can slam doors or smash things or even hit us. And when they get older, sometimes the hurts can grow far worse. They can rebel. They can reject everything we tried to teach them. They can get into drugs or alcohol or promiscuity, and we’ll feel powerless to help or protect them.

When we look at the Bible, we see a depressing number of hurting families and grieving fathers. How grieved would Isaac feel when he learned that Jacob had tricked him and stolen his brother’s birthright? How many nights did the father of the prodigal son wonder, with a heavy heart, whether his boy was safe or even alive? I think about David grieving over his rebellious son, Absalom, after his boy died. “O my son Absalom! My son, my son Absalom!” he cried over and over (2 Samuel 18:33).

I wonder: Did he grieve much less when Absalom forced his own father out of Jerusalem? Wouldn’t every father grieve?

This all brings us back to the importance of making moments with our children. These moments serve so many purposes. They’re memories to cherish. They’re teaching opportunities. They’re fun. But most importantly, they’re monuments that father and child alike can hold on to, monuments to your love and reminders of those bonds of affection that tie father and child together and keep them forever connected.

We can’t forget that, whatever the hurt or the wound, love really does conquer all. Love is irresistible, irrefutable, undeniable. Nothing rises to it. The dark side of our character has no weapon against it. It’s our trump card, and I think it’s the only one we have in the deck. Love is the key. That tether of love is the key to everything.

The tether of love, if you have rebellious children, becomes paramount to your relationship. Your kids can irritate you, frustrate you, and drive you to stop talking to them. That tether can fray, and fray badly, in the heat of anger, hurt, and heartache. But you can’t allow those frustrations to overwhelm your love. You must hold on to those moments you’ve built.

You have to hang on to that tether, even if it’s just a thread.

Because when your rebellious son or daughter turns twenty or twenty-five or thirty, they may remember those moments and long to see you and hear your voice and maybe even say they’re sorry. If that thread exists, they can find it and follow it back to you.

They know that, despite how much they hurt you and disappointed you and damaged their relationship with you, the thread of love continues to exist. They see it. They know the tether has never completely snapped. And then the two of you can begin to make some new moments, some new threads, to strengthen that bond once again.

To Forgive Is Divine (And Very, Very Hard)

But what happens if the tether breaks? What if the relationship gets truly severed? Is it too late then? Is there truly no hope?

There is hope, I believe. It’s never too late — as long as both father and child are still living.

But I don’t want to think simplistically about the process. If the tether breaks, it’s very, very difficult to tie it back together.

And forgiveness has to come in torrents.

If our love is a tether, then forgiveness is the knot that can mend the two pieces back together. [tweet this]

If we don’t have someone willing to forgive, and sometimes forgive a lot, we don’t have a lot of hope, in my opinion. But here’s the good news: If we do have forgiveness in such situations, then I think the tether can wind up even stronger than before.

We see it often in marriages when a serious failure or breach of trust has occurred — lying, adultery, or any number of behaviors. Once everything has come out in the open, those involved in the relationship may be able to save it and even strengthen it. Renewed honesty allows the level of trust to rise.

Forgiveness from one party can boost gratitude from the other. Where there is trust and gratitude, the love and affection two people have for each other can grow again — even stronger and in deeper and healthier ways. It seems counterintuitive, but I see it time and time again. Couples who fight through those situations come out on the other side healthier and even happier. And now they have nothing to hide. It again reflects that simple truth Paul outlined in his letter to the Romans — suffering can lead to hope.

In the same way, honesty and forgiveness can heal relationships between fathers and their children. But man, it can be hard to forgive! It’s much easier to bury our hurt in a pile of complacency and fool ourselves (or pretend) that we’ve forgiven.

Forgiveness doesn’t come easy to us. It’s not natural. Revenge is easy, while forgiveness comes primarily through faith, by the strength that comes through Jesus. [tweet this]

Anytime you say, “I’ve forgiven you,” even if you say it in your own mind, you should question yourself: Have you really forgiven this person? Or have you simply turned your heart off to the pain?

A good test to know your true feelings is to imagine if something happened to the person you’ve “forgiven.” If they died or were seriously injured, what would you feel? Joy? Pain? Indifference? That little test can provide a view into your own heart.

Sometimes what we call forgiveness is really nothing more than a mask, one more tool we use to hide the pain from others and ourselves. Forgiveness is hard. I struggle with it to this day. I don’t hold grudges. If I saw Hank or Mr. Reil today, I’d shake their hands. But have I truly forgiven my failed fathers? Or do I just not care anymore?

I think I have forgiven my father. I found that path to forgiveness easier, because I knew he loved me. While in many ways he was a horrific father, I still felt his love. And even as a child, I could distinguish between his love and his mistakes. I think I’ve forgiven Mr. Reil, just because I feel sorry for him, a sad, confused man. Perhaps what he did to me wasn’t exactly his fault. And in a way, perhaps that means I have nothing to forgive. You don’t forgive the rain for ruining your picnic or for flooding your basement. I saw no malice or purpose to Mr. Reil’s fear of me. He didn’t know reality. I just felt sorry for him because a grown man should know better, and he didn’t.

But if I’m being honest with myself, I doubt I’ve forgiven Hank. At times it feels as if I have, but disregard is not forgiveness. I don’t care, just as he may never really have cared for me. It’s sad to say that, and I’m embarrassed to say it, but I think it’s true. Hank is in God’s hands. But emotionally I can’t expend the time.

About a year ago, I visited my mom’s gravesite — the first time I’d gone there since I was ten. Hank had bought two adjoining plots when Mom died, one for her and one for him. He imagined at the time, I suppose, that the two of them could lie there side by side until the world stopped spinning.

I expected to see Hank there too, beside my mom as he imagined. I hadn’t seen him since the day of the funeral, and I braced to “see” him, albeit in a much different form, for the first time in forty years. Maybe for the last time.

I remembered as I walked to the grave his last words he ever spoke to us: “I can’t deal with this.” And when I got to the gravesite, those words struck me anew. In front of me lay more evidence.

A stranger — some other woman — now lies beside my mother’s body. Hank must’ve sold the gravesite. He ran away from us, and in the end he ran away from her. He scrubbed us all clean from his life.

I don’t know if he’s alive or dead. I do wonder, though, whether he ever looked back on those two years he spent with my mom and wondered if he could’ve, should’ve, done things differently.

Could he have become a better stepfather? Did he have it in him even to try? Did he ever feel regret? Did he ever have the urge to find us again, to call one of us Daly kids and apologize? Or, for him, was it just too late?

I know I’m not alone in wondering. Some men reading this book live with the pain of a damaged relationship. Others still wake up with a hurt inside them. Maybe they had a hard relationship with their own father, a story that sounds a little like mine. Maybe their dad drank too much or abused drugs or doled out abuse. Maybe he was a workaholic. Maybe he landed in jail. And the pain, after all this time, lingers.

Maybe you hurt your father. You left home in a huff, turned your back on your dad and family and went as far away as you could. And now that you have children of your own, you long to reconnect, but you don’t know how.

Maybe I have some readers like Hank. They never took the time to know their children. Perhaps they’ve never even seen them. But sometimes they wonder about them. Do they have families of their own? Have they moved on? They wish they could’ve done things differently. But they wonder – is it too late?

It’s never too late, not as long as we have breath in our bodies. Our relationships may have bent. They may even have broken. But with time and effort and a whole lot of forgiveness, we can mend them. There is hope!

There’s still a chance to be a good dad.

Watch the Video for The Good Dad

Excerpted with permission from The Good Dad, by Jim Daly, copyright Zondervan, 2014.

Love really does conquer all. Do or did you have a painful relationship with your dad, stepfather, or father figure? Did your dad mess up? Did you? Are you longing to repair the damage but don’t know where or how to begin? What about your relationship with your kids? There is hope! Join the conversation on our blog! We would love to hear from you.