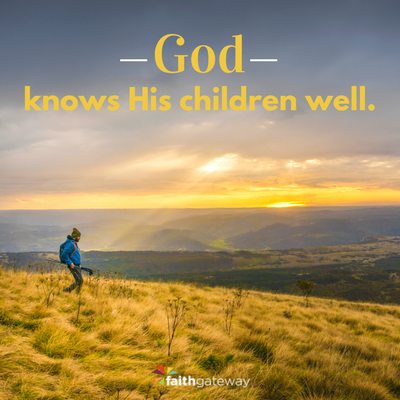 How can I save Israel? My clan is the weakest in Manasseh, and I am the least in my family. — Judges 6:15

Have you ever felt that no matter how hard you try, you just can’t win?

If you’ve ever felt outnumbered, unqualified, or disadvantaged, you will be encouraged by Gideon’s story.

It begins at a time when Israel had been living in the land of Canaan for nearly three hundred years. God has given them everything they need to be a great nation: a set of guidelines on how to live, His presence in the tabernacle, a way to atone for their sins, and land He had promised their ancestors. But it isn’t enough. They are addicted to worshiping other gods, a blatant violation of the very first guideline God gave them.

God severely punishes this behavior by allowing other rulers to oppress them, often scattering the Israelites into the mountains to hide in caves. Eventually they reach a point of utter desperation and call out to God to rescue them, and God responds by sending judges to free them from their oppressors. While we tend to think of judges as older men or women wearing robes and listening to court cases,

God’s judges are warriors who wear helmets and carry swords.

When a judge is in charge, the Israelites repent, which in the Hebrew language literally means they turn back from the direction they are heading and return to God. They experience a period of prosperity as they observe God’s guidelines and begin to resemble the community He has always envisioned for His people. But when the judge dies, they turn their backs on God and His guidelines, and another oppressor conquers them. God in His mercy raises up another judge, and the Israelites clean up their act. But after the judge dies, they return to their old rebellious habits.

This cycle of lather, rinse, repeat (or sin, judge, repent) occurs six times in the book of Judges. Of the 330 years that make up this period of Israel’s history, they spend 111 of them in oppression.

After all they had been through as God’s people! They really did have it all, but it wasn’t enough.

During one of those periods when the Israelites are suffering under an oppressive regime — in this case, the Midianites — they again repent and cry out to the Lord. This time God chooses a guy named Gideon to deliver them from their oppressors. Remember the guy in high school who got voted “Least Likely to Succeed”? This is our hero, Gideon. Even he is surprised when God gives him the prestigious assignment of saving the nation (Judges 6:15). He is the youngest in his family, from the weakest tribe, the runt in a family known for being weak. The weakest link in a paper-link chain. Not exactly gladiator material.

Gideon has a hard time believing that God really would choose him to save Israel, and who can blame him? This sounds to him like the ultimate prank, and he isn’t about to fall for it, so he proposes a plan to God that will prove whether he really is the man God wants to lead Israel into battle. Gideon decides that he will lay the fleece of a lamb on the ground overnight, and if it is soaked with dew while the ground around it remains dry, then he will know that God indeed has selected him. Sure enough, when he awakens the next morning and goes to retrieve the fleece, it is so wet he squeezes a whole bowl of water from it, but the ground is bone-dry.

“There must be some mistake,” Gideon apparently concludes, thinking so little of himself that he wants further proof. He asks God to reverse the order — this time the ground will be wet with dew while the fleece will remain fluffy and dry. God must have really wanted Gideon, because instead of getting angry or impatient with him, He does exactly what Gideon asks Him to do. When Gideon goes out in the morning, the ground is covered with dew, yet the fleece is dry. People today still talk about “putting out a fleece” in order to receive confirmation for something they feel compelled to pursue.

Once Gideon is firmly convinced that God has chosen him to lead Israel out of its oppression, he gathers the Israelite army — thirty-two thousand strong — at an encampment overlooking the valley where the Midianites are entrenched. God whispers to Gideon, “That’s too many. Let any soldier who’s even the least bit fearful leave.” Twenty-two thousand soldiers depart, which isn’t exactly a rousing endorsement of Gideon’s leadership. But God tells him he still has too many and helps him sift through the rest of the troops until he has only three hundred dedicated warriors left (Judges 7:1-8).

Why would God, then, put Gideon at such a disadvantage? If anything, Gideon needed more soldiers. If anything, God should have allowed him to keep all of his original soldiers, thirty-two thousand, which, when pitted against two hundred thousand opponents, would still be lousy odds.

But God knows His children well.

He knows that if the Israelites defeat the Midianites with their full army, they will become boastful and think their superior military strength and strategy saved them. Just as Adam and Eve thought they could be as wise as God, the Israelites would believe they were as strong as God. In the Upper Story, the only way we can be in a relationship with God is to acknowledge that He is God, and we are not. And like the Israelites, we still need to be humbled and reminded of this reality. If the Israelites were to pull off an upset and defeat the Midianites with just three hundred men, they would know that their salvation comes from God, not from their own hands. Not only would they know, but so would everyone else.

The Midianites knew there was no way Israel could defeat them. Gideon lays out God’s military strategy to his ragamuffin band of soldiers. He tells his tiny army to light torches and then hide them inside jars of clay. Each soldier carries the clay pitcher in his left hand; in the other hand, following Gideon’s instructions, each carries a trumpet. They sneak up on the Midianite army at night, and at Gideon’s signal, they smash the pitchers and blow on their trumpets. Gideon has the soldiers shout in unison, “A sword for Yahweh and for Gideon.” (Judges 7:20 paraphrased) The flash fires and horn blowing confuse and frighten the Midianites so greatly that they literally run around like chickens with their heads cut off! They must be thinking, If Israel has that many torchbearers and troubadours, just think how many soldiers they must have. They try to flee, but in the darkness they turn on each other with their swords. The battle is over before it started.

When the Midianites said, “No way,” Gideon had the men shout, “Yahweh.”

Gideon, the runt of the weakest family in the weakest tribe, leads a miniscule army of three hundred men to victory over the mighty Midianites. And under his leadership, Israel enjoys forty years of peace and prosperity.

Unfortunately, after Gideon died, the Israelites fell back to their old ways: “No sooner had Gideon died than the Israelites again prostituted themselves to the Baals. They set up Baal-Berith as their god and did not remember the Lord their God, who had rescued them from the hands of all their enemies on every side.” (Judges 8:33-34 paraphrased)

You would think that after such a miraculous victory, the Israelites never would have wanted to do anything less than serve God faithfully forever. But in their Lower Story lives, they always ended up putting their own selfish interests ahead of God’s wonderful provision for them. Instead of trusting that God knew what was best for them, they became resentful and concluded that following God’s ways would keep them from getting what they wanted. Like a spoiled kid who demands a new toy because all the other kids have one, the Israelites wanted what everyone else had. All the people from other nations got to worship Baal — an idol — so they wanted to worship him too.

If this sounds familiar, it’s because even today, it’s difficult for followers of God to remain focused on Him when everything is going right.

For some reason, in times of prosperity and abundance, we often grow distant or ignore God completely, feeling self-sufficient in our temporary happiness. Conversely, some of the most inspiring stories of devotion to God come from the poorest and most oppressed communities of faithful Christians.

Like the Israelites, we forget that the same God who saves us from our distress wants to walk with us and enjoy a relationship with us all the time, not just when our backs are against the wall. As you study the history of Christianity in the Western world, you see periods of spiritual lethargy — even rebellion against God — followed by great “awakenings” in which people cry out to Him and He answers with great power, reclaiming His children who have wandered from Him.

Our Lower Story rebellion against God is always met with his Upper Story invitation to return to Him. We can try it our way, until we get into such a mess that the only way to turn is toward God, and then He always takes us back. Regardless of what you have done, no matter how long it has been since you have turned away from Him and followed your own selfish desires,

you are never too far from God.

God is always ready to welcome anyone who calls out to Him to be saved.

God was able to use the runt of the weakest family in the weakest tribe in Israel to rescue His nation from oppression. He will go to whatever lengths are necessary to reclaim His people so that He can do life with them.

As for those who are willing to do exactly what He wants them to do, God will use them like He used Gideon’s jars of clay, as vessels to pour out His blessings and to build His nation, even if they are cracked pots — small, insignificant, and overlooked by others!

As Christians, we get ourselves into all sorts of trouble because we want to live life the way we want, not the way God wants. We think in our nearsightedness that God has abandoned us, turned His back on us. But God’s 20/20 vision always keeps us in His view. He is always waiting for us to return to Him when we stray. Like the loving Father He is, God opens His arms and says, “I will take you back. Always. No matter what you’ve done. I will deliver you because I love you.”

Does the cycle of lather, rinse, repeat (or sin, judge, repent) sound familiar in your own life? Is plenty or ease causing you to forget God? Let’s come before Him today and ask for His forgiveness for the ways we’ve wandered and turn back to Jesus today! Come share your thoughts with us on our blog. We want to hear from you! ~ Devotionals Daily