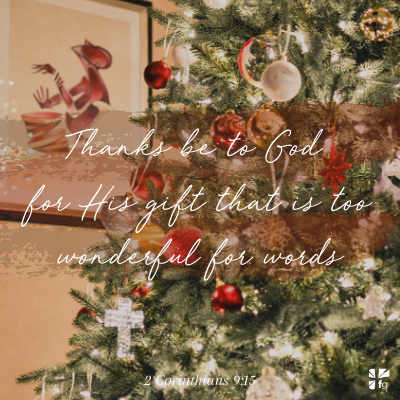 Thanks be to God for His gift that is too wonderful for words. — 2 Corinthians 9:15

Why did He do it? A shack would have sufficed, but He gave us a mansion. Did He have to give the birds a song and the mountains a peak? Was He required to put stripes on the zebra and the hump on the camel?

Why wrap creation in such splendor? Why go to such trouble to give such gifts?

That’s why you do it. And that is why God did it. Next time a sunrise steals your breath or a meadow of flowers leaves you speechless, remain that way. Say nothing and listen as heaven whispers, “Do you like it? I did it just for you.”

~ The Great House of God

Joseph was the husband of Mary, and Mary was the mother of Jesus. Jesus is called the Christ. — Matthew 1:16

Seems like the only common bond between [Jesus’ ancestors] was a promise. A promise from Heaven that God would use them to send His Son.

Why did God use these people? Didn’t have to. Could have just laid the Savior on a doorstep. Would have been simpler that way. And why does God tell us their stories?

Simple. He wants us to know that when the world goes wild, He stays calm.

No more names are listed. No more are needed. As if God is announcing to a doubting world, “See, I did it. Just like I said I would.”

~ When God Whispers Your Name

He gave up His place with God and made Himself nothing. He was born as a man and became like a servant. — Philippians 2:7

It all happened in a most remarkable moment… a moment like no other.

God became a man. Divinity arrived. Heaven opened herself and placed her most precious One in a human womb.

The Omnipotent, in one instant, became flesh and blood. The One who was larger than the universe became a microscopic embryo. And He who sustains the world with a word chose to be dependent upon the nourishment of a young girl.

God had come near.

Excerpted with permission from Grace for the Moment by Max Lucado, copyright Max Lucado.

Jesus’ incarnation, His becoming a tiny Baby in the womb of a teenage girl, was grace for the entire world. It was for you. It was for all of us. God came near. Come share your thoughts with us on this astonishing gift on our blog! We want to hear from you! ~ Devotionals Daily