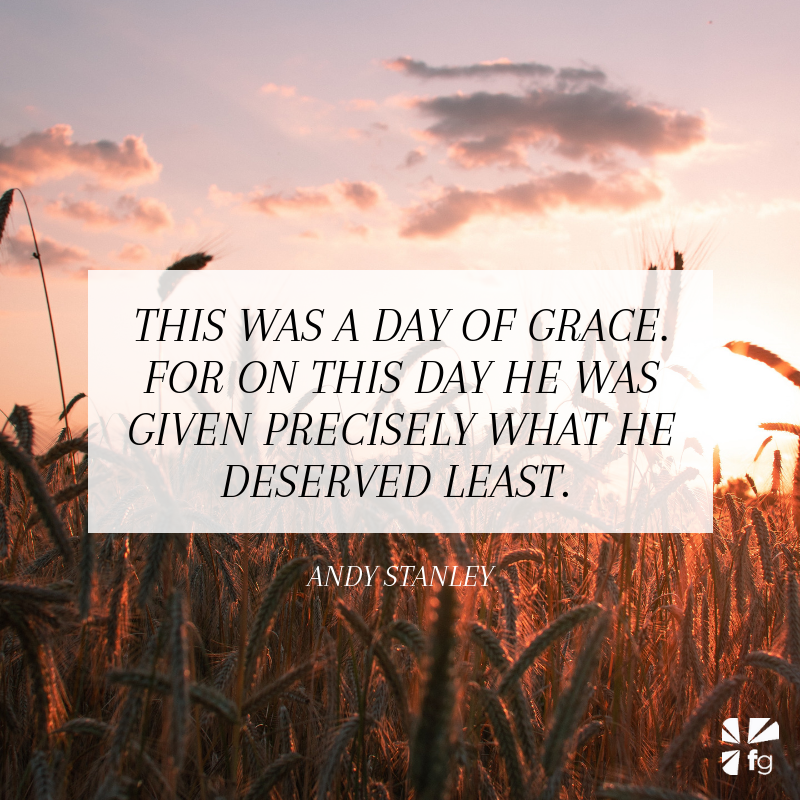 Twenty years had passed since the time Judah and his brothers sold Joseph into slavery. He had no way of knowing that Joseph had risen above a series of misfortunes to become the prime minister of Egypt. During Joseph’s rise to political power, he engineered a massive government food campaign to store up grain reserves for seven years in order to survive a predicted seven-year famine. Consequently, starving multitudes from all over the Mediterranean world choked the roads and harbors of Egypt, hoping to buy food.

The famine hit Jacob’s family especially hard. So hard that he sent Joseph’s brothers to Egypt for provisions. He refused to send Benjamin, however. His youngest son was Rachel’s only surviving son. Having lost Joseph, he couldn’t bear the thought of losing another favored son.

After a dry, dusty journey, Joseph’s brothers stood among the throngs of people seeking salvation from the famine. Like everyone else, they appeared before the government official in charge of selling grain to foreigners; that is, the prime minister. However, they didn’t recognize their brother. After such a long time, they probably assumed he had died as a laborer in the Egyptian mines. Joseph wore the makeup and official garb worn by all Egyptian officials, and he spoke Egyptian as fluently as a native. Therefore, the ten brothers observed standard protocol when addressing royalty: they bowed. The significance of this moment would not have been lost on Joseph. No doubt time slowed to a crawl as a long-forgotten dream from childhood suddenly consumed his thoughts.

Joseph concealed his identity. He played the part of a suspicious Egyptian bureaucrat in order to test his brothers, to see if they had changed. He also wanted to know if Benjamin had fallen prey to their hatred. So he held Simeon captive and sent the others home with grain, demanding they return with their youngest brother.

Naturally, this didn’t go over well with their father, Jacob. He refused to let Benjamin out of his sight; Simeon would have to fend for himself. But with the passing of time, their supply of grain ran low and they would need to make another journey to Egypt. So Judah made his father a vow.

Send the boy along with me and we will go at once, so that we and you and our children may live and not die. I myself will guarantee his safety; you can hold me personally responsible for him. If I do not bring him back to you and set him here before you, I will bear the blame before you all my life. — Genesis 43:8-9

Jacob finally agreed. He realized that without food, the famine would surely kill Benjamin; but by sending him to Egypt, everyone might live.

When Judah and his brothers appeared before Joseph again, all eleven of them bowed down with respect for this man whose word was law. To their surprise, Joseph hosted an elaborate dinner in their honor. While everyone enjoyed the banquet, Joseph watched his brothers closely, looking for signs of hatred or jealousy for Benjamin. Instead of hatred, he heard sorrow in their voices. They regretted what they had done to Joseph and expressed remorse for the pain they had caused their father.

To be certain of their remorse, Joseph devised one final test. He loaded each man’s donkey with as much grain as it could carry, placed the money they had paid back into each man’s sack of grain, and then hid an expensive silver cup among Benjamin’s provisions. Once their little caravan cleared the city gates, he directed his officials to accuse them of theft and to search them for stolen property. When the Egyptian officials found the silver cup in Benjamin’s sack of grain, they promptly arrested him, threatening to keep him as a slave.

Joseph framed Benjamin for the sole purpose of seeing how his brothers would react. Would they sacrifice him to save themselves? Would they take this opportunity to rid themselves of another favored brother? Or would they try to save him?

Judah had personally guaranteed Benjamin’s safety with his father, but he was well known for his lack of follow-through. Nevertheless, he asked for a private word with Joseph to plead for Benjamin’s release.

Your servant guaranteed the boy’s safety to my father. I said, “If I do not bring him back to you, I will bear the blame before you, my father, all my life!” Now then, please let your servant remain here as my lord’s slave in place of the boy, and let the boy return with his brothers. How can I go back to my father if the boy is not with me? No! Do not let me see the misery that would come upon my father. — Genesis 44:32-34

When Joseph heard this, he couldn’t contain himself any longer. He commanded all of his attendants to leave the court so that only he and his brothers remained. Until this point Joseph had communicated with his brothers through a translator. Now that they were alone, the men had to wonder how they would even communicate with this strange Egyptian. So imagine their shock when he gazed into their eyes and declared in their own language,

Once the recognition was complete, the brothers’ heads were bowed to the ground once again. But this time more out of fear than respect. And the brother who had the most to fear was Judah. Judah, who undoubtedly thought of what he would do if the roles were reversed. Judah, who for more than twenty years had outrun the consequences of his betrayal. But what goes around comes around. And so he would get what he had coming to him after all.

But there was no sound of guards rushing into the room. No clamor of weapons. No orders for arrest. All was strangely calm. This would be a day Judah would never forget.

This was a day of grace.

For on this day he was given precisely what he deserved least. Joseph continued,

And now, do not be distressed and do not be angry with yourselves for selling me here, because it was to save lives that God sent me ahead of you. — Genesis 45:5

This is one of the moments in Old Testament history that I would have loved to to see for myself. We can only wonder how long it took for Joseph’s words to register. How long before any of the brothers had the courage to make eye contact? They were consumed with guilt over what they had done. Joseph was consumed with something else entirely. Grace.

Not only did Joseph forgive them, but he invited them to bring their families and to live in the most fertile territory Egypt had to offer. Within seconds, Judah and his brothers went from condemned to death to the position of esteemed guest of the second most powerful man in Egypt. Once again, the law of sowing and reaping was thwarted. But this time it was thwarted by grace. As it turned out, Judah never really got what he deserved.

As is always the case with grace, he got exactly what he deserved least.

We’re used to the law of sowing and reaping. It’s the natural order, the way most cultures and communities define fairness, and how families and social groups often operate. But, it’s not grace! Grace is getting what we least deserve. Come join the conversation on our blog. We’d love to hear from you about grace! ~ Devotionals Daily