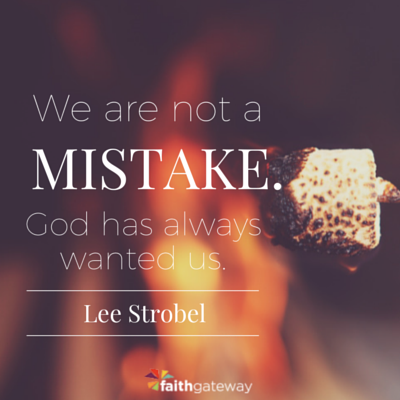 Confusion created through relationships in our family translate into the way we view God and how we interact with the family of God.

Lee Strobel uses his own history along with several other ordinary stories of God’s grace to His wayward children like you and me to help us examine what it means to have a loving relationship with God.

We are not a mistake. God has always wanted us.

The Case for Grace is a nine chapter book with a discussion guide included. It is loaded with important insights to help us reach toward God’s Grace no matter where we are in our faith journey — from atheist to believer. ~ Fred Bittner, FaithGateway Bible Study

It wasn’t until my mother was on her deathbed that she confirmed what years of therapy had only suggested to me: I was a mistake, at least in the eyes of my father.

“Your dad was… well, let’s just say he was surprised,” my mom told me in the waning weeks of her life, when we would chat for hours as she was bedridden with cancer.

She paused. “Not in a good way,” she said, her eyes empathic.

“I don’t want to say angry. Frustrated, yes. Upset by the circumstances. This just wasn’t in his plans. And then I talked him into having another baby so you’d have a playmate.” That was my younger sister.

This made sense to me. Years earlier, when I told my therapist about my relationship with my father — the emotional distance, the lack of engagement, the ongoing strife and flares of anger — he speculated that my inconvenient arrival in the family had interrupted my dad’s plans for his future.

One evening when I was about twelve, my father and I clashed over something. I walked away feeling shame and guilt, and I went to bed vowing to try to behave better, to be more obedient, to somehow make myself more acceptable to my dad. I can’t recall the details of what caused our conflict that evening, but what happened next is still vivid in my mind fifty years later.

I dreamed I was making myself a sandwich in the kitchen when a luminous angel suddenly appeared and started telling me about how wonderful and glorious heaven is. I listened for a while, then said matter-of-factly, “I’m going there” — meaning, of course, at the end of my life.

The angel’s reply stunned me. “How do you know?”

Said the angel, “That doesn’t matter.”

Now I was staggered. How could it not matter — all my efforts to be compliant, to be dutiful, to live up to the demands of my parents and teachers. Panic rose in me. Words wouldn’t come out of my mouth.

The angel let me stew for a few moments. Then he said, “Someday you’ll understand.” Instantly, he was gone — and I woke up in a sweat. It’s the only dream I remember from my childhood. Periodically through the years it would come to mind, and yet I would always shake it off. It was just a dream.

As I got older, I found myself getting more confused about spiritual matters. When I became a teenager, my parents insisted that I attend confirmation classes at the church. “But I’m not sure I even believe that stuff,” I told my dad. His response was stern: “Go. You can ask questions there.”

The classes were built around rote memorization of the catechism; questions were only reluctantly tolerated and dealt with in a perfunctory way. I actually emerged with more doubts than when I started. I endured the process because when I was finally confirmed, the decision about whether to continue going to church would be mine — and I knew what the answer would be.

At the time I was oblivious to the fact that

a young person’s relationship with his father can greatly color his attitude toward God.

I saw this illustrated later in life when I became friends with Josh Mcdowell, whose father was a violent alcoholic. “I grew up believing fathers hurt,” Josh said. “People would tell me there’s a heavenly Father who loves you. That didn’t bring joy. It brought pain because I could not discern the difference between a heavenly Father and an earthly father.” Josh became a self-described “ornery agnostic” until his investigation of Christianity convinced him it was true.

Growing up, I just knew that as doubts festered inside and as my teachers insisted that science has eclipsed the need for God, I was being increasingly pulled toward skepticism. Something was missing — in my family and in my soul — that created a gnawing need I couldn’t even describe at the time.

1. In your opinion, what makes a great father? What are the top three traits of a terrific dad?

2, When you hear the word “grace,” what’s the first image or thought that springs to mind? What does the term “grace” mean to you?

Eugene O’Neill said that man is born broken and the grace of God is glue, and I think that’s pretty true, that it’s divine glue… I experience it as buoyancy, as a very strange sense of calm in the midst of tremendous anxiety and lostness. I often get my sense of humor back, or I just feel safe and in God’s care. — Anne LaMott

3. In her book Sin Boldly, Cathleen Falsani compares the concepts of justice, mercy, and grace this way:

Justice is getting what you deserve.

Mercy is not getting what you deserve.

And grace is getting what you absolutely don’t deserve. ..

Do you agree with these comparisons? Why or why not? Using a real-life example, can you illustrate the differences between justice, mercy, and grace?

4. Describe an occasion when you received or offered grace. What happened? How did the experience make you feel? What was the outcome?

5. Are you more apt to receive grace, extend grace, or neither? Explain your response. Why do you think this is true of you?

6. What reservations do you have about discussing a book of stories about God’s grace? What benefits do you anticipate gaining? How might the stories in this book help you to live out your own story of renewal by grace?

7. Here are some pieces to the grace puzzle:

Which piece is most difficult for you to grasp? Which one is easiest to implement? Which one do you most need to experience in your life right now? Why?

8. The apostle Paul describes the benefits of receiving God’s grace:

Therefore, since we have been justified through faith, we have peace with God through our Lord Jesus Christ, through whom we have gained access by faith into His grace in which we now stand. And we rejoice in the hope of the glory of God. — Romans 5:1-2

Imagine receiving grace from God. What would that look like to you? How might that experience impact you?

9. A. W. Tozer said: “[God] waits to be wanted. Too bad that with many of us He waits so long, so very long, in vain.” Why do you think people resist God? What are some ways in which you have resisted God in the past? How resistant are you to God right now?

Grace is God loving, God stooping, God coming to the rescue, God giving Himself generously in and through Jesus Christ.  — John Stott

10. How significant are words of affirmation, appreciation, and affection to children growing up? To what extent did you hear such words as a child? How were you impacted by hearing or not hearing them?

12. Lee describes a time when his dad inadvertently left him at the church. Lee may not have fully realized the impact of this incident at the time, but it became a vivid memory. What is one vivid memory you have of your relationship with your father? Why do you think that recollection lingers for you?

13. Describe your relationship with your father growing up. To what extent has that relationship influenced your concept of God? What are some other factors that have impacted your beliefs about God?

14. When Lee left home, he said he was on a mission fueled by rage. What was Lee’s mission? What is your mission in life — and what do you think fuels it?

15. To what extent can you relate to Lee’s confusion about spiritual matters? What spiritual issues most perplex you?

17. Select a number on the scale below that best indicates where you are right now on your spiritual journey. Explain your response.

18. In the original Greek, John 1:18 uses the idiom “in the bosom” to describe the closeness of God the Son and God the Father. In effect, says Michael Reeves in his book Delighting in the Trinity, John is painting a picture of Jesus as being eternally in the bosom or lap of the Father. “One would never dare imagine it,” said Reeves, “but Jesus declares that His desire is that believers might be with Him there (John 17:24).” For a moment, dare to picture yourself sitting securely in the lap of your gracious heavenly Father. What thoughts and emotions come to you? In what ways would this experience affect you?

You are not a mistake! God wanted you, created you, and seeks your heart every day! He longs for you to experience His immeasurable love. Join us in conversation on the blog! We would love to hear your answers to Lee’s questions about how our early fathers affect our view of God and what His heart is toward us.