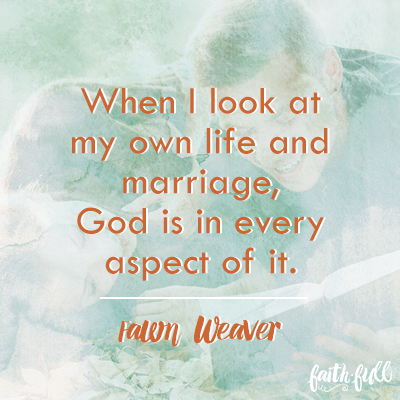 Editor’s Note: Fawn Weaver grew tired of the negative portrayals of marriage on the news, talk radio, and reality TV, so she launched the blog HappyWivesClub.com and trekked across the globe. Her mission: to interview couples in happy marriages and share their stories. The following is just one of those beautiful stories of marital success. Enjoy and be encouraged to pursue sweetness and happiness in your own marriage!

Mark was a close friend of Barbara’s brother, John. Barbara’s mother always told John he had to take care of his little sister, so as a child, Barbara was generally tagging along with her brother and his friend Mark. She recalled trip upon trip of sitting in the backseat of John’s car while he and Mark sat up front. They hardly acknowledged her. They weren’t mean, she assured me. But they were older. They talked about girls and sports. It made sense to her that she wasn’t part of the gang, so she just minded her own business while they sat in the front.

“I had no attraction to Mark whatsoever,” Barbara said. “We were simply friends, and mainly because he was friends with my brother. We didn’t really have a friendship of our own. Then,” she said with a heavy pause, “one day Mark fell very ill.”

Mark was the type of person who lit up the room when he walked in. Not because he was overly outgoing or the jokester of the bunch; he simply had a sweet spirit about him. Maybe this came from his bouts with illness that took him in and out of the hospital throughout his teenage years. His was the type of humility and appreciation for life that often accompanies a battle with sickness.

During one of his struggles with his illness, Mark remained in the hospital for weeks. Barbara visited him regularly to bring fruit and other things to cheer him up. He had a girlfriend at the time, but that didn’t dissuade Barbara from seeing him often. During one of her visits, Barbara learned from one of the members of their church that Mark had thyroid cancer. The doctors gave him two years to live. (At this point, I noticed the prominent scar where they’d cut into Mark’s neck.)

After Barbara learned this secret — something no one had shared with Mark yet — she began visiting him more often. This is when their friendship blossomed. However, there was still no romantic interest.

Eventually the doctors told Mark they’d given all the treatments his body could handle and could give no more. When he was finally discharged from the hospital, he and Barbara began getting together more as friends. It would be many months before they’d both realize their friendship was growing into something more.

Doctors still don’t have an explanation for what happened to Mark. They told him he’d never be able to have children. He and Barbara now have four. They both talked about his life and their family as miraculous interventions from God. Based on the diagnosis, I could see no other explanation myself. And it was clear that the life-threatening hardship they walked through together so many years ago created a lasting foundation for their relationship.

When you’ve already stared death down, with your best friend at your side, what else could come against you that is harder?

Happily married for twenty-eight years, Barbara displayed the same unconditional love toward Mark that she had in the hospital room for all that time. I could see it in her eyes when she and Mark glanced across the table at each other.

He adores her. There is no one but God above her. They are empty nesters and are so happy to have the home and their lives back to themselves, unlike some empty nesters, who become depressed because they’ve spent twenty years taking care of their children and forgotten to nourish their own relationship. It’s beautiful Mark and Barbara have continued saying “thank you” and “please” and being courteous to each other as friends.

Most important, Barbara said, they respect each other. (Sanita and Abraham simultaneously said, “Yes!” the moment she uttered the word respect.) “You know, sometimes we come to a place where we can’t even agree. But we respect each other enough to say, ‘Let’s just choose to disagree,’ and we leave it at that and move on.”

Throughout my conversation with Mark, Barbara, Abraham, and Sanita, the issue of a belief in God kept returning to the forefront. Abraham and Sanita believed their faith in a being much higher than themselves had caused them each to strive to be the best person and best spouse possible. I connected with them on this point immediately. Although I would never claim there aren’t atheists who are exceedingly happy in their personal lives, I can say without contradiction that I’ve not met one yet.

There’s just something about the hope that springs in the heart and soul of a person of faith that is almost unexplainable.

In my own marriage, the verse

A cord of three strands is not quickly torn — Ecclesiastes 4:12

explains a lot about the strength of our marriage. God is the third cord.

“God chose the exactly right person for me and exactly the right person for her,” Mark said, underscoring the importance of God in one’s marriage, “so when you’ve got that right match, then the recipe is going to be respect, trust, and love.”

Barbara shared how she and Mark, on the way over to our dinner, tried to count the couples they’d been friends with at church through the years that were still together. The only one they could think of was James and Hila. Barbara and Hila ran down a list of a dozen or so of their church friends who’d gotten married around the same time as them.

“No, they’re not together anymore.”

“No, they’re not married anymore either,” was their back-and-forth exchange. Other than those around our table, they could only think of one additional couple who remained married after all these years. Their exercise of remembrance reminded me of something so true.

Just because you are faithful to church doesn’t guarantee a happy marriage.

But I can’t help but see a correlation between all the couples I’ve interviewed. They all have a healthy fear of God. They have a strong belief in a power much greater than their own, and they rely on that power in times of weakness and times of strength.

They also believe in the golden rule, of doing unto others (especially their spouses) what they would have done unto them. It is a principle found in almost every major religion, including my own. Jesus shared this one rule as that which summarizes all the laws of the world:

So in everything, do to others what you would have them do to you, for this sums up the Law and the Prophets. — Matthew 7:12

Every couple I’ve interviewed, without exception, applies this golden rule to their life. Maybe not perfectly (as that is certainly the case with me), but it is their goal.

When I look at my own life and marriage, God is in every aspect of it.

I wake up each morning grateful to God for everything I have at that moment. My happiness is a natural by-product of that gratitude. Author Melody Beattie puts it this way, “Gratitude unlocks the fullness of life. It turns what we have into enough, and more. It turns denial into acceptance, chaos into order, confusion into clarity… It turns problems into gifts, failures into success, the unexpected into perfect timing, and mistakes into important events. Gratitude makes sense of our past, brings peace for today and creates a vision for tomorrow.”

Every happily married person I interviewed on my trip was grateful for his or her spouse, thanking God daily for one another. They had learned from every blunder, as Barbara said, “I have no regrets.” Every mistake had been a lesson learned, and that lesson was accepted as a gift.

That night, I was filled with immense gratitude for their generous sharing. I was humbled that these wonderful people, essentially strangers, would open their world to me and peel back the veil on their lives. What a privilege.

It’s easy to gather dozens and dozens of stories of marriages gone sour and couples grown bitter, angry, and eventually divorced. But, let’s not lose heart! Not only are there many, many happy marriages, but you can be encouraged by their stories and with God at the center of your lives build a happy marriage of your own! Come join the conversation on our blog. We want to hear from you about building a healthy, happy marriage. ~ Faith.Full