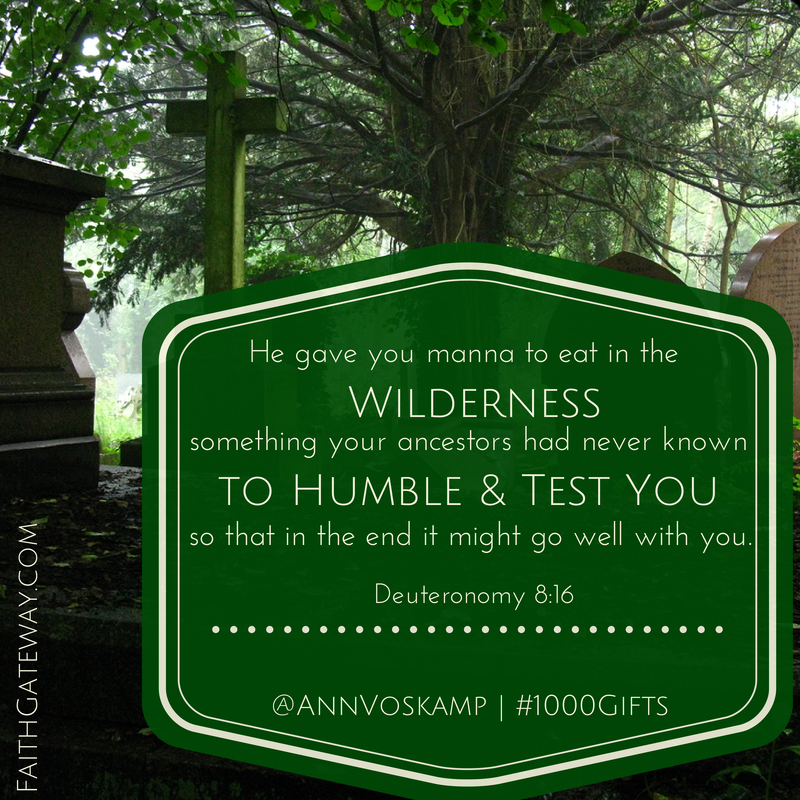 He humbled you, causing you to hunger and then feeding you with manna, which neither you nor your ancestors had known, to teach you that man does not live on bread alone but on every word that comes from the mouth of the Lord. – Deuteronomy 8:3

I shouldn’t, but I do. I look up. Into all his hardly tamed grief. I feel wild. My brother-in-law’s eyes shimmer tears, this dazed bewilderment, and his stoic smile cuts me right through. I see his chin quiver. In that moment I forget the rules of this Dutch family of reserved emotion. I grab him by the shoulders and I look straight into those eyes, brimming. And in this scratchy half whisper, these ragged words choke — wail. “If it were up to me…” and then the words pound, desperate and hard, “I’d write this story differently.”

I regret the words as soon as they leave me. They seem so un-Christian, so unaccepting — so No, God! I wish I could take them back, comb out their tangled madness, dress them in their calm Sunday best. But there they are, released and naked, raw and real, stripped of any theological cliché, my exposed, serrated howl to the throne room.

His firstborn, Austin, had died of the same genetic disease only eighteen months prior. Now he was about to bury his second son in less than two years.

“You know…” John’s voice breaks into my memory and his gaze lingers, then turns again toward the waving wheat field. “Well, even with our boys… I don’t know why that all happened.” He shrugs again. “But do I have to?… Who knows? I don’t mention it often, but sometimes I think of that story in the Old Testament. Can’t remember what book, but you know — when God gave King Hezekiah fifteen more years of life? Because he prayed for it? But if Hezekiah had died when God first intended, Manasseh would never have been born.

And what does the Bible say about Manasseh? Something to the effect that Manasseh had led the Israelites to do even more evil than all the heathen nations around Israel. Think of all the evil that would have been avoided if Hezekiah had died earlier, before Manasseh was born. I am not saying anything, either way, about anything.”

He’s watching that sea of green rolling in winds. Then it comes slow, in a low, quiet voice that I have to strain to hear.

“Just that maybe… maybe you don’t want to change the story, because you don’t know what a different ending holds.”

The words I choked out that dying, ending day echo. Pierce. There’s a reason I am not writing the story and God is. He knows how it all works out, where it all leads, what it all means. I don’t.

His eyes return, knowing the past I’ve lived, a bit of my nightmares. “Maybe… I guess… it’s accepting there are things we simply don’t understand. But He does.”

And I see. At least a bit more. When we find ourselves groping along, famished for more, we can choose. When we are despairing, we can choose to live as Israelites gathering manna. For forty long years, God’s people daily eat manna — a substance whose name literally means “What is it?” Hungry, they choose to gather up that which is baffling. They fill on that which has no meaning. More than 14,600 days they take their daily nourishment from that which they don’t comprehend. They find soul-filling in the inexplicable.

They eat the mystery.

They eat the mystery.

And the mystery, that which made no sense, is “like wafers of honey” on the lips.

He gave you manna to eat in the wilderness, something your ancestors had never known, to humble and test you so that in the end it might go well with you. – Deuteronomy 8:16

A pickup drives into the lane. I watch from the window, two brothers meeting, talking, then hand gestures mirroring each other. I think of buried babies and broken, weeping fathers over graves and a world pocked with pain and all the mysteries I have refused, refused, to let nourish me. If it were my daughter, my son? Would I really choose the manna? I only tremble, wonder. With memories of gravestones, of combing fingers through tangled hair, I wonder too… if the rent in the canvas of our life’s backdrop, the losses that puncture our world, our own emptiness, might actually become places to see.

To see through to God.

Lord God, Maker of all, when You give manna moments, may I give You thanks for the mystery. Because the manna that makes no sense — You will make it my sustenance. Today, in all the “what is it?” moments, turn me to give thanks for who You are.

Excerpted with permission from One Thousand Gifts Devotional by Ann Voskamp, copyright Zondervan, 2012.

Grief and God. Have you wanted a different story that the one you’re living? Have you ever howled with grief at God desperate to undo what’s happened to you? Have you asked God to teach you to embrace the “What is it?” in your life, to surrender to the mystery? Come join the conversation on our blog! We would love to hear from you! ~ Devotionals Daily 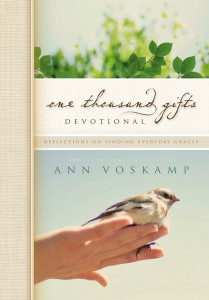