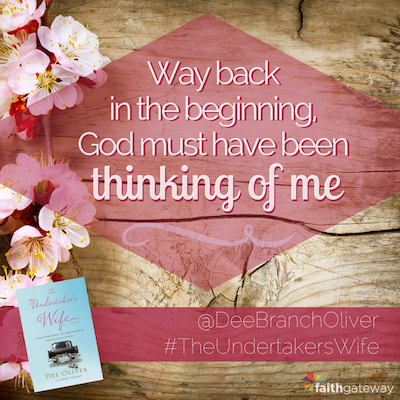 That’s the mantra of all grief counselors, particularly those who work in the funeral business. When you lose a loved one, don’t make any sudden moves.

That makes sense, really. We take comfort in the familiar — old slippers, old chairs, old books, old friends. And I think that, when someone dies, God activates some sort of divine bubble wrap. It’s like a protective, shock-absorbing system for your emotions, and it’s designed to shield you from the outside world and give you time to process your grief.

Wrapped in this buffer (which lasts for about a year), you can adjust to your new reality at a deliberate, unhurried pace. If you try to speed up the process, you will likely find yourself having to backtrack later — and believe me, you don’t want to crisscross through the tangled Forest of Adjustment any more times than you have to.

Some of your well-meaning friends and family members might advise you to short-circuit the mourning period and “move on” or “embrace life” in any number of ways. People will encourage you to sell your husband’s golf clubs, redecorate your kitchen, get a nose job, or try dating. And while I have nothing against any of these ideas — and, if my mother is to be believed, plastic surgery is almost as good as a ham biscuit when it comes to chasing the blues away — they can wait. Move too soon, and you’ll pop the bubble wrap.

Instead, surround yourself with all that is familiar, reassuring, and good. Your whole world has been upended, and you need as much stability as you can find — particularly if you have children, who thrive on the security blanket of “sameness.” Of course, there may be financial or other factors that necessitate some degree of change, but don’t make the mistake of thinking that just doing something — anything — will make you feel better.

Trust me, I know.

As a funeral director’s widow, I figured the “no change” rule did not apply to me. I was no amateur; I’d been walking other people through the grieving process for more than twenty years. And even though I’d kept Johnnie’s sunglasses on the bookshelf (right where he’d left them), I had rearranged the living room furniture — and the girls and I were still standing. Plus, I’d survived phase one of the Great Clutter Clean-Out. Sure, Johnnie’s suits were still hanging in our closet and his precious lawn mower still took up half the garage, but I’d made a few changes — I upgraded my phone, for instance — and I seemed to have suffered no ill effects. I was feeling strong. How wrong could it be if I tried to “tweak” our lives with a little bit of happiness?

Perhaps a little bit of background is in order. A month or so before Johnnie died, we had made the excruciatingly difficult decision to put our dog — our wonderful, well-trained, perfect dog — to sleep. I considered Spot some of my best work (he was better behaved, by far, than any of our children), and when he got sick, I was devastated. We all were. Spot had been part of our family for eight years.

A few weeks after Johnnie’s funeral, I found myself consumed by a seemingly unquenchable sadness, and I began to miss Spot with a renewed vigor. What a comfort he would be to me and the girls! What a source of joy he would provide, were he still around to greet us in the kitchen every morning, to lie at my feet while I read the paper, to snuggle with the girls? Nothing I could do would bring Spot back, but I thought that perhaps I could re-create the dog.

“Vicki?” I said, calling on my faithful sidekick of a cousin. After all, if she’d picked Johnnie from the litter of available bachelors, surely she could help me find a dog. “I miss Spot.”

“What breeder?” Vicki wanted to know.

“Spot’s breeder. A gal named Sally. She’s got one standard poodle left from their latest batch, and he’s black, just like Spot. Will you come with me?”

Vicki knew the breeder’s kennel was four hours away, but I was counting on the fact that almost no one says no to a grieving widow. Sure enough, she agreed to go, and I picked her up the next day.

I should have known something wasn’t right when we arrived at the kennel and were greeted by a pair of beasts that looked more suited for saddles than leashes. “Meet Duke and Daisy,” Sally said, scratching one of the dogs behind an ear. “They’re Henry’s parents.”

I followed Sally around the corner of her house to the kennel out back, the place where we’d adopted our beloved Spot. Duke and Daisy followed at her heels, like well-behaved giants.

“This is Henry!” Sally announced, motioning toward a dog that was, convict-like, trying to stage an escape by digging under his fence. Intent on completing his mission, Henry ignored us.

Henry kept digging. He was bigger than I’d expected him to be, far less cuddly-looking than Spot had been as a puppy.

“How old is Henry?” I inquired.

Four months. That meant that other would-be owners had probably come and gone, eyeballing Henry but passing him by. To his credit, Henry didn’t look at all troubled by the rejection; he seemed content to dig.

“Is he — trained?” I wasn’t quite sure how to put the question; I hoped Sally would get my drift.

“He’s mostly there,” Sally replied. “He just needs a good home. Someone to love him.”

Looking at Henry, I felt myself softening. Don’t get me wrong — there was nothing all that attractive about this purebred, half-grown, antisocial mongrel. But even as he turned his back on me and found a new place to dig, I found myself longing to take him home. To train him. To love him into perfection, as I had his ancestor (at least I wanted to think it was his ancestor), Spot. Spot, the magnificent.

Vicki and I loaded Henry into the car. As I eased in behind the wheel, I heard a retching sound. Henry, it seemed, had thrown up.

“Some dogs don’t like cars,” Sally offered. “He’ll be all right as soon as you get on the road.”

Henry was not, as it turned out, “all right.” Not even close.

He barfed when we got to the highway, and then again an hour or so down the road. Any woman with half a brain would have turned the car around right then and there, but all I could see was the happy faces of my daughters when they saw — surprise! — what I had done. They had a hole in their hearts; I was going to fill it with a new dog.

And the girls were happy. They were ecstatic, in fact, and I congratulated myself on my success.

The boys at the funeral home weren’t so sure. “You just lost Johnnie,” Sam said — as though, after barely a month, I might have forgotten. “Have you lost your mind too? You, of all people, should know about the one-year rule.”

Immune to their chastisement, I smugly crossed my arms.

What’s that saying in the Bible? Something about how pride goeth before Dee’s fall? Hold on a sec, while I look it up. Here it is.

Proverbs 16:18 — Pride goes before destruction, a haughty spirit before a fall.

Now, I know the good Lord wrote the Bible with everyone in mind, and it’s not like any one of us has a corner on his warnings. But when I read that verse — when I saw that word destruction — I couldn’t help but think that, way back in the beginning, God must have been thinking of me.

Destruction doesn’t begin to cover it. Four chewed-up kitchen chairs, one partially devoured wall, and about half of a newly reupholstered sofa later, I had to concede that the boys were right. I backtracked through the Forest of Adjustment and found Henry a new home. He became the beloved pet of a family who, evidently, didn’t mind the degree of “change” he supplied.

I, meanwhile, found a good therapist.

Puppies, like nose jobs and new boyfriends, can wait — for at least a year. And maybe even two.

Excerpted from The Undertaker’s Wife: A True Story Of Love, Loss, And Laughter In The Unlikeliest Of Places by Dee Oliver, copyright Zondervan, 2015.

There’s no avoiding death, no avoiding trauma, no avoiding grief… nor the desire to escape it, soothe it, or “make it better” somehow! But, as Dee suggests, we can avoid making decisions that will only bring chaos in their wake. That “No-Change for a Year Rule” is the grief counselors’ mantra for a reason! What about you? Have you ever made a bad choice that you thought would cheer you up during a time of grief? Or, have you ever seen chaos coming beforehand and decided against making that change that would’ve brought additional trouble? Join the conversation on our blog. We would love to hear from you.