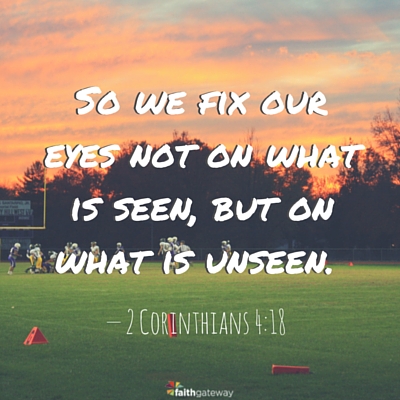 Editor’s Note: The most exciting time of the NFL football season is upon us, as fans around the country are gearing up for Superbowl Sunday. Enjoy this excerpt of  Guts, Grace, and Glory: A Football Devotional by Dr. Jim Grassi. This book gives favorite Bible verses and anecdotes from some of the greatest players in the game — Johnny Unitas, Tim Tebow, Paul Bear Bryant, RGIII, Bryan “Bart” Starr, Matt Hasselbeck, and more — and shares the message that glory, on and off the field, hinges on a solid relationship with God and the guts with which one plays out life’s challenges. If there are football fans in your life, please share this inspirational devotion!

After retiring from football in 2004, I elected to leave the world of the NFL and focus my energies and attention on serving the poor in the Ninth Ward of New Orleans through Desire Street Ministries (DSM). I became the Executive Director after Hurricane Katrina, and now the new DSM serves urban ministry leaders all over the Southeast. I’ve been excited to see the recent success of my friend and fellow Gator, Tim Tebow.

At a time in this nation when we seem to have lost decorum and respect, it is important to me to see mature athletes respectfully interact with community — especially teammates, family, and those people who look up to us.

For that very reason, it was a special honor that, in 2005, the All Sports Association of Fort Walton Beach created the Wuerffel Trophy to be awarded annually to the college player who best exemplified great character, good academics, outstanding play on the field, and provided service to their community. In 2009, I presented that trophy to Tim Tebow.

I really admire how Tim uses his platform in such a positive way. I believe there is no right way for evangelical players to use the platform of football. It’s really up to the individual. I chose to subtly fold my hands in prayer after a big moment. I’m really amused about all the media hype that happens when committed Christian men express their celebration by demonstrating a humble spirit through kneeling in prayer or pointing to God.

Also important to me is how we as Christians deal with the struggles life will bring to each of us. Football, like other professions, has its hard knocks and personal challenges. The struggles I faced in football helped me in June 2011 when I was diagnosed with Guillain-Barre Syndrome, a disorder of unknown origin that turns the body’s immune system against the nervous system. This results in partial paralysis and prolonged muscle weakness until the body can recover.

As I fight this disease, I’m reminded of the battles each of us face every day in defending our faith and standing up for what’s right.

The Lord reminds us:

My peace I give you. I do not give to you as the world gives. Do not let your hearts be troubled and do not be afraid. – John 14:27

For the LORD loves the just and will not forsake his faithful ones. — Psalm 37:28

How do you lift up your praises to God for his blessings to your life? If you’re an athlete, do you have a favorite ritual, prayer, posture, or act of thanksgiving before or after your games? Leave your comments below – we’d love to hear your thoughts on this! ~ Devotionals Daily