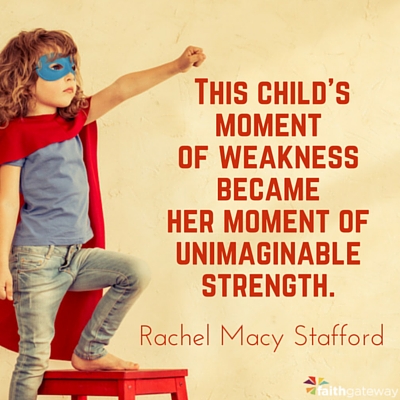 “I want be on the swim team like Natalie,” Avery announced shortly after she turned six. She’d even put on Natalie’s team suit and Speedo goggles to show that she meant business. The suit was drooping in the rear and the goggles were on upside down, but this was no laughing matter. In fact, this was cause for celebration. Standing before me was the girl who’d let out agonizing cries whenever her hair was washed for nearly her entire life. The bathtime hysterics had only stopped a few months earlier when she witnessed her baby cousin get soaped and rinsed while wearing a smile.

“You’ll have to get your head wet and swim laps,” I clarified. It felt it was important to point out that swim team wasn’t just playing cards, eating Twizzlers, and chugging Gatorade like she witnessed many swimmers doing at her sister’s meets.

Avery did understand what being on the swim team meant and actually breezed through the initial evaluation to swim the length of the pool without stopping. In just a few short weeks of practice, Avery was demonstrating proficiency in the various strokes and kicks — and always with a smile. When it came to diving off the block, however, the situation quickly deteriorated.

For weeks, Avery’s coaches patiently spent time coaxing, encouraging, and trying everything short of bribery to get her to dive off the blocks. Finally, one momentous day, she did it — but it was a fake-out. Although she’d looked fully prepared to enter the water in appropriate dive form, her entry turned into a feet-first jump as soon as she left the block.

While this imperfect dive might seem acceptable to the average observer, official swimming guidelines deem this practice unsafe. Avery was informed that because she was not dive certified, she was not permitted to dive off the blocks in the upcoming swim meets. Thinking this restriction probably made her feel sad or different, I offered to work with her on a headfirst dive. Her eyes instantly filled with tears. “Mama, it’s too scary to look down into the water and think of my head going before my feet,” she cried.

Before my Hands Free journey, my response likely would have been a sharply delivered, “Well, if you are on the swim team, then you need to learn to dive properly.” (After all, what would people think?). While traces of my inner competitor/perfectionist still remain part of who I am, I knew this was not the time to force my child into doing something she did not feel comfortable doing. This was a time to let go and let be. I knew that Avery would become dive certified in her own time. And if she was content to begin her competitions by jumping off the side, then I should be too.

Little did I know the impact she would make when given the freedom to decide when and how she would break the surface.

Our family had driven an hour to attend a large swim competition that included several other YMCA swim teams. After a quick warm-up, it was time for Avery’s twenty-five-yard freestyle event. She stepped toward the blocks with the other competitors. As the other girls climbed onto the blocks, she stepped onto the edge of the pool where she was accustomed to doing her Fake-out Dive Jump into the water. Avery extended her arms so they covered her ears and was in dive position waiting for the start buzzer.

Suddenly, the official held up his hand and told the girls to relax. He said something to Avery’s coach. Scott and I nudged each other. We knew this delay had to do with our child — the freckle-faced girl with unruly curls peeking out beneath her swim cap. I could see the official shaking his head. Through hand gestures, I could see he was giving her two choices: dive off the block headfirst or start from the water.

After approximately ten seconds of careful consideration, my daughter made her choice. And when she did, I had an unexpected emotional reaction. Warm, silent tears began dripping down my face. My daughter did not climb on the starting block and make the dive of her life. Instead, she gently slid herself into the water. After giving one last look up at her competitors standing high up on their respective platforms, she gripped the side of the pool. With one hand extended, she was ready for takeoff. When the buzzer sounded, the other girls dove in and Avery pushed off the wall with all her might. As she propelled herself to the other side of the pool, I could not stop the tears, nor did I try. Despite a tumultuous start, my child was smiling. I could see that joyful, goggle-clad face each time she turned her mouth for air. No interpretation was needed. I am on the swim team just like my big sister, that enormous grin said.

What I witnessed in the water that day is the essence of grasping what matters in an environment that can so easily sway you to focus on what doesn’t matter. Forever etched in my mind is Avery sliding herself into the water as anxious onlookers looked at their watches and tapped their feet. Their annoyed facial expressions revealed their inner thoughts: Get on the block already. We don’t have all day.

But Avery did not take the easy route. Instead, she courageously did what she needed to do to participate. That meant rejecting the pressure to do what everyone else was doing and do what was comfortable to her. Avery may not have dove in headfirst, but she gave it her all. She didn’t let an unusual entrance ruin a perfectly good swim, a perfectly good meet, a perfectly good day, or a perfectly good life.

Suddenly this child’s moment of weakness became her moment of unimaginable strength.

Have you had that experience of seeing beauty in your child and their efforts as you let them be? What happened? What brave thing did they try given the freedom to not be perfect? Come join the conversation on our blog! We would love to hear your comments.