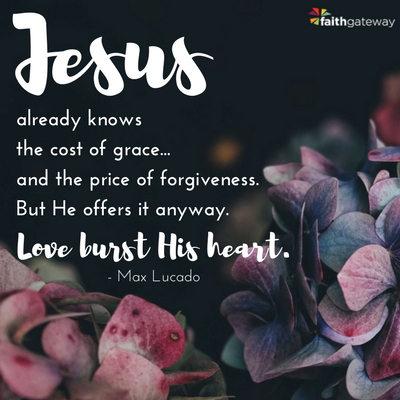 Which is easier: to tell this paralyzed man, “Your sins are forgiven,” or to tell him, “Stand up. Take your mat and walk”?  — Mark 2:9
Let’s talk for a minute about lovebursts. You’ve witnessed sunbursts: sunlight shafting into a shad- owed forest. You’ve seen starbursts: shots of light soaring through a night sky. And you’ve heard powerbursts: raw energy booming in the silence. And you’ve felt lovebursts. You may not have called them such, but you’ve felt them.

You and your husband are at a party. One of those stand-in-the-living-room-and-talk-and-eat parties. You are visiting with some women, and your husband is across the room in a circle of men. The topic in your group is husbands, and the collective opinion is negative. The women complain about the amount of golf, dirty socks, and late nights at work. But you’re silent. You say little because you have little to say. The guy you married isn’t perfect, but he isn’t a pain either. In fact, compared to these guys, he sounds pretty special. He’s changed more than his share of diapers, and his golf clubs haven’t come down out of the attic since the last baby was born. You look across the room at your husband and smile at the way he tugs at the tie you convinced him to wear. Still as hand- some as the day you met. A bit paunchier and balder perhaps, but you don’t see that. All you see is the man who stole your heart. And all of a sudden you’d go to China in a rowboat to tell him how glad you are that he did.

That’s a loveburst. Here is another.

It’s been a while since you held a baby. It’s been a while since you were near a baby. But now you’re alone with the baby. Your kids dropped him off at the house for the evening, and your wife ran to the store to get some milk, and now it’s just you and your grandson. He’s only a few days old and wrapped tighter than the cigars you gave your friends. As you cradle him in your arms, you realize this is the first time the two of you have been alone. With all the fanfare and friends at the hospital, you haven’t shared a private moment — till now. So you sit in your big chair and turn him so you can see his face. You ponder the future, his future: first steps, first kiss, football, college. You wonder what it’s going to be like being a kid in a world where hurt seems to linger on every corner.

As you look into the little eyes and nose that came from the other side of the family, it hits you. Out of nowhere comes a bolt of devotion. You’re suddenly aware that hell itself would have to get past you to get to this one who carries your name. “It’s gonna be all right,” you hear yourself pledge to the sleeping boy. “Whatever happens, just remember I’m here. It’s gonna be all right.”

Those are lovebursts. You have them. I have them. And this may surprise you: Jesus had them… lots of them.

One of them happened when Jesus met an invalid. The man couldn’t walk. He couldn’t stand. His limbs were bent and his body twisted. A waist-high world walked past as he sat and watched.

Perhaps he was palsied, his body ridden with disease since birth. While other children had jumped and run, he had labored to bring a spoon to his mouth. As his brothers and sisters spoke and sang, his words slurred and slipped. Maybe he had never known what it was to be whole.

Then came the fall — a tumble down a canyon, perhaps a stumble down some stairs. The pain in his skull was unbearable, but the numbness in his legs and arms was far worse. His feet hung like ornaments on the ends of his legs. His hands dangled like empty sleeves from his sides. He could see his limbs, but he couldn’t feel them.

Whether he was born paralyzed or became paralyzed — the end result was the same: total dependence on others. Someone had to wash his face and bathe his body. He couldn’t blow his nose or go on a walk. When he ran, it was in his dreams, and his dreams would always awaken to a body that couldn’t roll over and couldn’t go back to sleep for all the hurt the night dream had brought.

When people looked at him, they didn’t see the man; they saw a body in need of a miracle. That’s not what Jesus saw, but that’s what the people saw. And that’s certainly what his friends saw. So they did what any of us would do for a friend. They tried to get him some help.

Word was out that a carpenter-turned-teacher-turned-wonder-worker was in town. And as the word got out, the people came. They came from every hole and hovel in Israel. They came like soldiers returning from battle — bandaged, crippled, sightless. The old with prune faces and toothless mouths. The young with deaf babies and broken hearts. Fathers with sons who couldn’t speak. Wives with wombs that wouldn’t bear fruit. The world, it seemed, had come to see if he was real or right or both.

By the time his friends arrived at the place, the house was full. People jammed the doorways. Kids sat in the windows. Others peeked over shoulders. How would this small band of friends ever attract Jesus’ attention? They had to make a choice: do we go in or give up?

What would have happened had the friends given up? What if they had shrugged their shoulders and mumbled something about the crowd being big and dinner getting cold and turned and left? After all, they had done a good deed in coming this far. Who could fault them for turning back? You can only do so much for somebody. But these friends hadn’t done enough.

One said that he had an idea. The four huddled over the paralytic and listened to the plan to climb to the top of the house, cut through the roof, and lower their friend down with their sashes.

Faith does those things. Faith does the unexpected. And faith gets God’s attention. Look what Mark says:

When Jesus saw the faith of these people, He said to the paralyzed man, ‘Young man, your sins are forgiven’. — Mark 2:5

Finally, someone took him at his word! Four men had enough hope in him and love for their friend that they took a chance. The stretcher above was a sign from above — somebody believes! Someone was willing to risk embarrassment and injury for just a few moments with the Galilean.

Jesus was moved.  Like the wife overwhelmed with love for her paunchy but precious husband.  Like the grandfather determined to protect his grandson. Like the parents touched by the prayer of their child.

Jesus was moved by the scene of faith. So He applauds — if not with His hands, at least with His heart. And not only does He applaud, He blesses. And we witness a divine loveburst.

The friends want Him to heal their friend. But Jesus won’t settle for a simple healing of the body — He wants to heal the soul. He leapfrogs the physical and deals with the spiritual. To heal the body is temporal; to heal the soul is eternal.

The request of the friends is valid — but timid. The expectations of the crowd are high — but not high enough. They expect Jesus to say, “I heal you.” Instead He says, “I forgive you.”

They expect Him to treat the body, for that is what they see.

He chooses to treat not only the body, but also the spiritual, for that is what He sees.

They want Jesus to give the man a new body so he can walk. Jesus gives grace so the man can live.

Remarkable. Sometimes God is so touched by what He sees that He gives us what we need and not simply that for which we ask.

It’s a good thing. For who would have ever thought to ask God for what He gives? Which of us would have dared to say: “God, would you please hang Yourself on a tool of torture as a substitution for every mistake I have ever committed?” And then have the audacity to add: “And after You forgive me, could You prepare me a place in your house to live forever?”

And if that wasn’t enough: “And would You please live within me and protect me and guide me and bless me with more than I could ever deserve?”

Honestly, would we have the chutzpah to ask for that? No, we, like the friends, would have only asked for the small stuff.

We would ask for little things like a long life and a healthy body and a good job. Grand requests from our perspective, but from God’s it’s like taking the moped when he offers the limo.

So, knowing the paralytic didn’t know enough to ask for what he needed, Jesus gave it anyway: “Young man, your sins are forgiven” (Mark 2:5).

The Pharisees start to grumble. That’s not kosher. Even a tenderfoot Jew knows,

Their mumbling spawns one of Christ’s greatest questions:

Which is easier: to tell this paralyzed man, ‘Your sins are forgiven,’ or to tell him, ‘Stand up. Take your mat and walk’? — Mark 2:9

So strong was His love for this crew of faith that He went beyond their appeal and went straight to the Cross.

By the way, He hasn’t changed. What happened then happens today. When we take a step of faith, God sees. The same face that beamed at the paralytic beams at the alcoholic refusing the bottle. The same eyes that danced at the friends dance at the mom and dad who will do whatever it takes to get their child to Jesus. And the same lips that spoke to the man in Capernaum speak to the man in Detroit, to the woman in Belfast, to the child in Moscow… to any person anywhere who dares to come into the presence of God and ask for help.

And though we can’t hear it here, the angels can hear Him there. All of Heaven must pause as another burst of love declares the only words that really matter:

Your sins are forgiven.

Stop and imagine the Lord’s loveburst for you. Right where you are. In the middle of your problems, worries, fears, and doubts. You are loved and forgiven. Come share your thoughts with us on our blog. We would love to hear from you! ~ Devotionals Daily