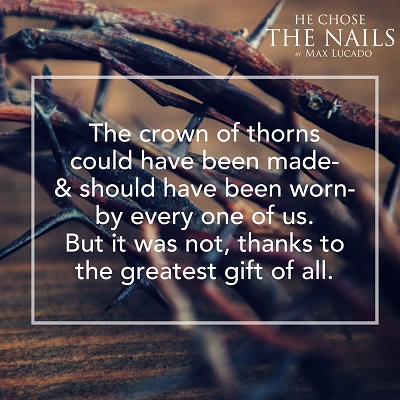 God did what the law could not do. He sent His own Son in a body like the bodies we sinners have. And in that body God declared an end to sin’s control over us by giving His Son as a sacrifice for our sins. — Romans 8:3 NLT

Welcome to session 1 of He Chose the Nails, a five-week study that explore the season of Lent as an extension of Christmas – a season of receiving the most precious gifts a person could ever receive – the gifts that God graciously gives us through his Son.

In this study, you will discover the many gifts that Christ provided to us at his crucifixion. These include not only the gift of the cross, but also the gift of the thorns that pierced his brow. The nails that tore his flesh. The seamless robe that he removed for us. The empty tomb where he forever defeated sin and death.

The hill of the cross is rich with the gifts of God’s grace. These were gifts he didn’t have to give. The only required act for our salvation was the shedding of blood, yet God did so much more. So, as we unwrap these gifts, we need to pause and listen for his voice. As we do, perhaps we will hear him whisper, “I did it just for you.”

Video – Overview of the Study

Session One: He Chose to Be One of Us

Play the video segment for session 1. As you watch, use the outline provided to follow along or to take additional notes on anything that stands out to you.

The gifts of Easter are the most precious gifts any person could ever receive because they cost God so much to give.

God’s greatest gift of all — His greatest act of love for us — was sending Jesus into our world.

Timelessness: Jesus swapped eternity for calendars. The Bible tells us God is “beyond our understanding! The number of His years is past finding out” (Job 36:26) There is no moment when God was not God, for He is eternal.

Boundlessness: Jesus gave up being a spirit to live in a body. One moment He was a boundless spirit; the next moment He was flesh and bones.

Sinlessness: Jesus became sin for us. An object that symbolizes the consequences of sin in humanity’s heart is a thornbush (see Genesis 3:17-18; Numbers 33:55; Proverbs 22:5; Matthew 7:16) The thorny crown on Christ’s brow is a picture of the fruit of our sin that pierced His heart.

We are “by nature children of wrath” (Ephesians 2:3 NASB) Though we have been made in God’s image, we’re corrupt at the core. The sinless One took on the face of a sinner so that we sinners could take on the face of a saint.

Jesus never knew the fruits of sin until He became sin for us (see 2 Corinthians 5:21) When He was crucified, He cried out in a loud voice, “My God, my God, why have you forsaken me?” (Matthew 27:46) Those are not the words of a saint but the cry of a sinner.

The crown of thorns could have been made — and should have been worn — by every one of us But it was not, thanks to the greatest gift of all.

Why did God give us this gift?

God did it for us — just for us — because He loves us.

Take a few minutes to talk about what you just watched.

1. What part of the teaching had the most impact on you?

Receiving the Gifts of Easter

2. Imagine for a moment that you have decided to do a random act of kindness for a stranger by leaving a $100 bill in a public place (such as a park, a lobby, or a store aisle). After placing the cash where it can be easily spotted, you hide nearby to see who will find it. As you wait, you begin to think about who might receive your gift.

3. Max described the period leading up to Easter as a season of gifts — precious gifts that God gave us at the cross, such as the crown of thorns For centuries, Christians throughout the world have used the season of Lent to prepare themselves spiritually so that nothing prevents them from receiving and celebrating the greatest Easter gift of all — the resurrected Christ.

The word Lent comes from the Old English word lencten, which means spring. In its earliest observance, Lent was a time for new converts to prepare for their baptism on Easter Sunday. Today, Lent marks the forty-day period before Easter that begins each year on Ash Wednesday. (There are actually forty-six days between Ash Wednesday and Easter, but the six Sundays in Lent are traditionally set aside as days of renewal — considered “mini-Easters” — and so are not counted as part of Lent.) Although it is traditionally a time devoted to self-examination, self-denial, and repentance, Lent sinks its deepest roots into the joyful expectation of new life through God’s forgiveness and steadfast love. This sense of Lent is evident in the words of John the Baptist:

The kingdom of God has come near Repent and believe the good news! — Mark 1:15

We also find it in this passage written by the prophet Joel, traditionally read at the beginning of Lent:

“Even now,” declares the Lord, “return to Me with all your heart, with fasting and weeping and mourning.” Rend your heart and not your garments. Return to the Lord your God, for He is gracious and compassionate, slow to anger and abounding in love, and He relents from sending calamity. — Joel 2:12-13

The time during which Joel was a prophet was one of great prosperity God had richly blessed His people, but their hearts had grown cold over time. They began to take “God and His blessings for granted. [Their] faith had degenerated into an empty formalism and their lives into moral decadence. ”1 Through the prophet, God pleaded with His people to return to Him with their whole heart.

The season of Lent issues a similar call to God’s people today. It is a time to take seriously the areas of our lives in which we fall short, feel defeated, or have grown cold. And we do so not to beat ourselves up but to prepare for God’s gifts:

Lent is a time for discipline, for confession, for honesty, not because God is mean or fault-finding or finger-pointing but because He wants us to know the joy of being cleaned out, ready for all the good things He now has in store.2

This process of being cleaned out is part of how we return to God with all our heart, which is what Lent is meant to help us do.

4. A crown is a symbol of honor and authority. In the Old Testament, a crown (or turban) was a mark of consecration for a priest (see Exodus 39:27-31) and a sign of sovereignty for a king (see 2 Kings 11:12). In the New Testament, the apostle Paul acknowledged the crowns given to athletes as symbols of their victory and reward (see 1 Corinthians 9:24-25). The elements of a crown, and the materials used to make it, were often significant. For instance, the number of bands around a crown might indicate the number of territories over which a king had dominion.5 Crowns given to kings were made of precious metals and sometimes adorned with gems (see 2 Samuel 12:30); crowns or garlands given to athletes were made of leaves or other perishable foliage (see 1 Corinthians 9:25).

5. In his allegorical novel about heaven and hell called The Great Divorce, author C S Lewis characterizes souls who set themselves against God as those who are determined to refuse the good gifts God constantly offers them.

As you anticipate learning more about the gifts of Easter in the remaining sessions of this study, in what ways does this perspective about receiving God’s gifts challenge you? In what ways does it intrigue you or encourage you?

Walking Together through Lent

6. In addition to studying together, it’s also important to walk together through Lent — to share our lives with one another and to be aware of how God is at work among us. In each session, there will be many opportunities to speak life-giving — and life-challenging — words and to listen to one another deeply.

As you look ahead to the coming weeks of learning and walking together, what request would you like to make of the group? How do you hope other members will challenge you or encourage you? Use one or more of the sentence starters below, or your own statement, to help the group understand the best way to be a good friend to you throughout this study.

You can help me to take Lent seriously this year by…

It really helps me to engage in a group when…

I tend to withdraw or feel anxious when…

The gifts of Easter are the most precious gifts any person could ever receive because they cost God so much to give. God’s greatest gift of all — His greatest act of love for us — was sending Jesus into our world…

How would you describe your understanding and experience of Lent over the years? In what ways is it similar to or different from the description you just read? Have you thought of it as a time to prepare for God’s great gift of love and sacrifice? We would love to hear your response to this Bible study. Join the conversation on our blog!