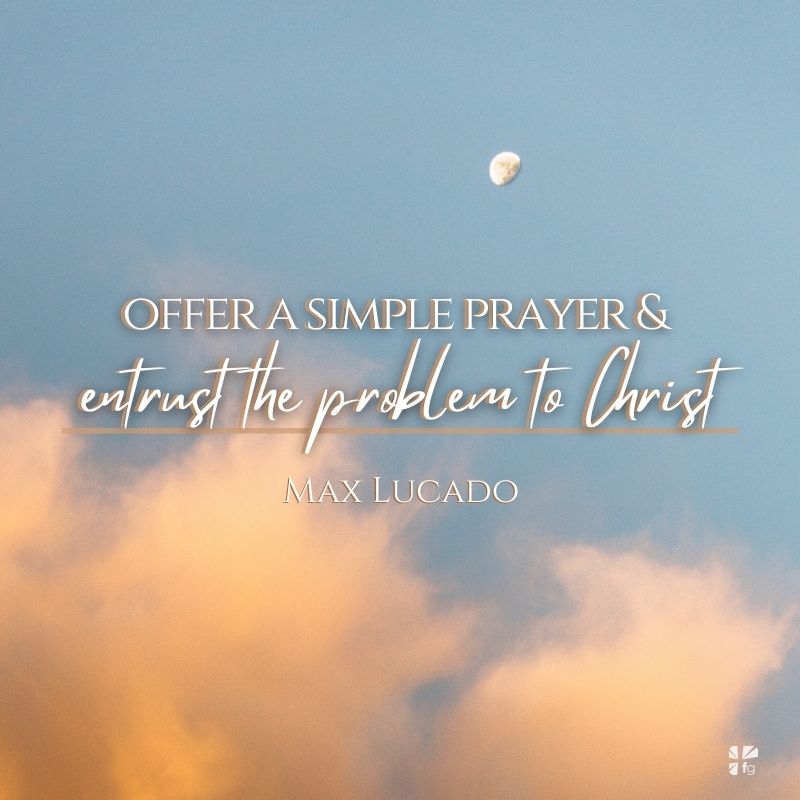 He didn’t look omniscient. He looked intelligent, with his horn-rimmed glasses, gray-flannelled suit, and stack of documents. He was smart, prepared, and every bit the statistician his profession demanded he be. Otherworldly and prophetic? Divine? Clairvoyant? I saw no halo. No attending angels. There was a glow to his face, but I chalked that up to the afternoon sun that fell through his office window.

“Let’s see,” he said, flipping through a binder of graphs and reports. “The two of you will live until…” He looked up long enough to say, “If you want to see for yourself, I’m on page seven.” He paused while we caught up. My palms were beginning to moisten. Denalyn’s eyes had widened. We’d been given dates before: due dates for our daughters, graduation dates from college, save-the-day dates for weddings. But a death date? Gave new meaning to the word deadline. Did we want to know his findings?

His full-time job was life insurance. Over the phone he’d told me, “I want to make certain you have what you need.”

To do this, he needed two pieces of data: the amount of premium we were willing to pay and the number of our years remaining on earth. I could supply the first. He said he could supply the second. And now he was about to give it to us. “What if his date is this week?” I asked Denalyn. “Should I arrange for a guest speaker for the church?” She didn’t smile. Neither did he.

He spoke with the casual tone of a hotel attendant reviewing reservation dates. “Mrs. Lucado, I’ve got you here with us until 2044. Mr. Lucado, your date of departure appears to be 2038.”

Well, there it was. At least now we knew. I can’t tell you much of anything else he said. I was transfixed on finally having my gravestone data. I knew the first number: 1955. I knew the next mark: a one-inch-long dash. (I measured it on a headstone once just out of curiosity.) Now I knew the second number: 2038.

This conversation occurred in 2018. I was down to, gulp, twenty years. I was three quarters of my way to crossing the Jordan. Armed with this new piece of data, I couldn’t resist calculating my remaining resources:

The exercise reminded me of an oft-ignored truth: we are running out. Running out of days, dates, and dances. The hourglass was irreversibly flipped the day we were born, and we’ve been depleting our resources ever since. We don’t have what we had yesterday. Our spending is outpacing our deposits — a fact, I think, that explains the reasoning behind miracle number one in the ministry of Jesus. He was at a wedding. Mary, His mother, was present as well. She came to Christ with a problem.

Had I been the angel on call that day, I would have intervened. I would have placed a wing between Mary and Jesus and reminded her about the mission of her Son. “He was not sent to the earth to handle such mundane, day-to-day tasks. We are saving His miraculous powers for cadaver calling, leper touching, and demon casting. No wine? Don’t whine to Jesus.”

But I was not the angel on call. And Mary enlisted the help of her Son to deal with the problem: empty wine ladles. Folks in first-century Palestine knew how to throw a party. None of this wedding and reception in one evening, no sir. Weddings lasted as long as seven days. Food and wine were expected to last just as long. So Mary was concerned when she saw the servants scraping the bottom of the wine barrel.

Fault poor planning by the wedding planner. Fault guests for guzzling more than their share. Fault Jesus for showing up with a troop of thirsty disciples. We are not told the reason for the shortage. But we are told how it was replenished. Mary presented the problem. Christ was reluctant. Mary deferred. Jesus reconsidered. He commanded. The servants obeyed and offered the sommelier what they could have sworn was water. He sipped, licked his lips, held the glass up to the light, and said something about their squirreling away the best wine for the farewell toasts. The servants escorted him across the room to see the six vats filled to the brim with fruit of the vine. The wineless wedding was suddenly wine flush. Mary smiled at her Son. Jesus raised a glass to His mother, and we are left with this message:

our diminishing supplies, no matter how insignificant, matter to Heaven.

I have a curious testimony to this truth. During one of my many less-than-sane seasons of life, I competed in Half Ironman Triathlons. The event consists of a 1.2-mile swim, a 56-mile bike ride, and a 13.1-mile run. Why was a fifty-year-old preacher participating in such endeavors? That’s what my wife kept asking me. (Don’t worry. I didn’t wear a Speedo.)

During one of these races I prayed the oddest prayer of my life. Four of us traveled to Florida for the race. One of my friends had invited a competitor from Indiana to join us. All told, I knew these three participants. There were at least two hundred people whom I did not know, a fact that proved crucial to my story.

I finished the swim, if not dead last, at least nearly dead and almost last. I mounted my bike and began the three-hour trek. About a third of the way into the cycling portion, I reached into the pocket of my shirt to grab some GU. GU is a packet of easily eaten essential nutrients. Well, guess who forgot his GU? I was GU-less with a good thirty miles to go. One doesn’t find any GU-selling convenience stores on the triathlon road.

Like you I’ve offered innumerable prayers in my life. I’ve prayed for the enfeebled as they died and for babies as they were born. I’ve prayed for broken hearts, homes, and bones. But I had never prayed for GU. Yet what was I to do? No GU means no go for an old guy like Max.

So I prayed. Between puffs and pedal strokes, I said, Lord, this very well might be the only time in eternity you’ve heard this request. But here is my situation…

Did GU fall from Heaven? Well, sort of. The fellow from Indiana, the friend of my friend, one of the three people I knew out of the entire field, just “happened” to pedal up from behind me.

When he heard of my GU-lessness, he reached into the pocket of his biking shirt, pulled out three packs, and said, “I’ve got plenty!” He handed them to me and off he went.

You may very well be thinking, Lucado, that is a lame example of answered prayer. I’m dealing with disease, debt, the threat of layoffs and letdowns, and you’re talking about something as lightweight as GU in a race?

Indeed, I think that is Jesus’ point. Of what import is a wine-less wedding? Of all the needs of people on the planet, why would bone-dry wine vats matter? Simple. It mattered to Jesus because it mattered to Mary. If Jesus was willing to use divine clout to solve a social faux pas, how much more willing would He be to intervene on the weightier matters of life?

Be anxious for nothing, but in everything by prayer and supplication, with thanksgiving, let your requests be made known to God. — Philippians 4:6, emphasis mine

In everything — not just the big things — let your requests be made known.

Mary modeled this. She presented the need to Christ. “They have no more wine.” No fanfare. No drama mama. She knew the problem. She knew the provider. She connected the first with the second.

My kids did this. They had a way of telling me exactly what they needed when they needed it. I never received a phone call from one of them saying, “Please be a good father to me today, Dad.” Or “I declare in the name of good parenting that you must respond to my deepest desires.”

What I heard was “Can you pick me up?” “Can I get some money?” “May I spend the night with my friend?” “Will you help me with my homework?” “How did you become such a brilliant, wise, and handsome father?”

Okay, that last question might be a stretch. The point is, my daughters made specific requests. Did I recoil at the specificity? Was I insulted that they dared to tell me exactly what they needed? Of course not. I was their dad. It was their way of saying, “I depend on you.” It falls to the father to heed the need and respond to the request of the child.

So I ask, Have you asked? Have you turned your deficit into a prayer? Jesus will tailor a response to your precise need. He is not a fast-food cook. He is an accomplished chef who prepares unique blessings for unique situations. When crowds of people came to Christ for healing,

One by one He placed His hands on them and healed them. — Luke 4:40 The Message, emphasis mine

Had Jesus chosen to do so, He could have proclaimed a cloud of healing blessings to fall upon the crowd. But He is not a one-size-fits-all Savior. He placed His hands on each one, individually, personally. Perceiving unique needs, He issued unique blessings.

A precise prayer gives Christ the opportunity to remove all doubt about His love and interest. Your problem becomes His pathway. The challenge you face becomes a canvas upon which Christ can demonstrate His finest work. So offer a simple prayer and entrust the problem to Christ.

It simply falls to us to believe — to believe that Jesus is King of each and every situation. So make your specific request, and trust Him to do, not what you want, but what is best. Before you know it, you’ll be raising a toast in honor of the One who hears your requests.

By the way, if you happen to be around in 2038, we’ll let you know if our friend the lifespan forecaster knew what he was doing.

Excerpted with permission from You Are Never Alone by Max Lucado, copyright Max Lucado.

Are you talking to Jesus about everything? Big and small, important and trivial, all day, every day? He wants to hear about it all from  you! You can’t bore Him. He’s in it with you all the way. Come share your thoughts on bringing everything to Jesus on our blog. We want to hear from you! ~ Devotionals Daily