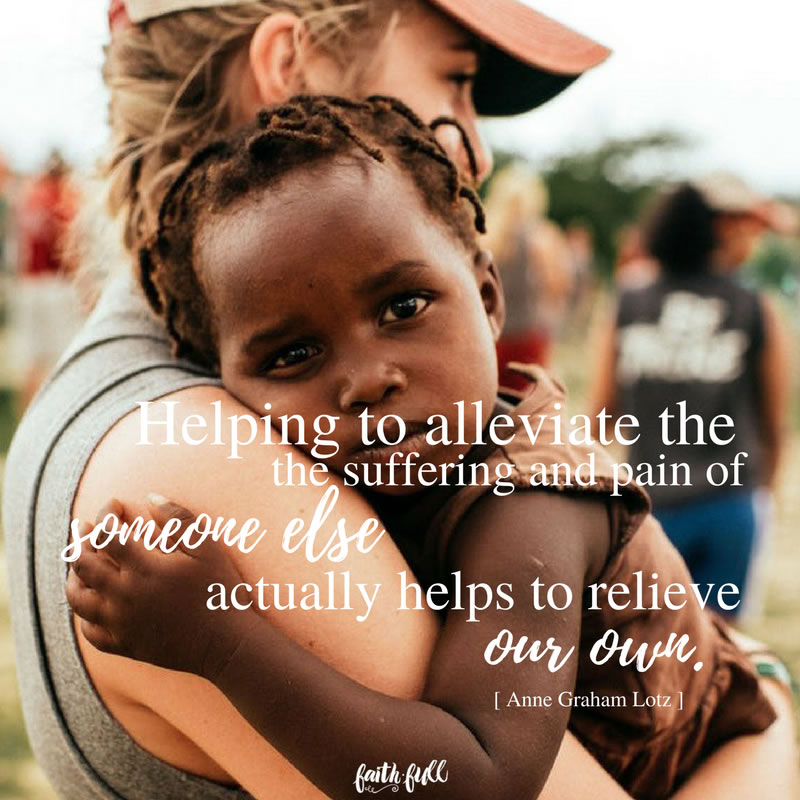 Do not be afraid; God has heard the boy crying as he lies there. Lift the boy up and take him by the hand, for I will make him into a great nation. — Genesis 21:17-18

To be truthful, there are some wounds I have nursed. Sometimes it feels good to hurt bad. I can take a wicked pleasure in rehashing what others have said or done to inflict the wound, each time reaffirming my own innocence and giving in to self-pity. I derive a counterfeit comfort from extending to myself sympathy and consolation and understanding. After all, I deserve those tears! Yet, even though it is often appropriate to grieve, an attitude of entitlement about my wounds can keep me wandering in a spiritual wilderness, weeping under the scrub bush, getting nowhere with my life. At some point, I have to decide if the wounds are worth holding on to. The wounding is past. That was then; this is now.

I believe Hagar had reached that turning point in her own journey. She had to decide if she was truly ready and willing to change. She had to stop her sobbing, stop fighting the wounders — mentally, emotionally, and spiritually — and just be still. She had to acknowledge the reality of her current position so she could get on with the rest of her life. Regardless of how she arrived where she was, she was there. I wonder if, in her weariness, she was just too tired to even take another step, think another thought, make any decisions at all.

God understands. Years later, another wounded child of His was running for his life through the desert (1 Kings 19:1-21). The prophet Elijah had just miraculously defeated the prophets of Baal on Mount Carmel. He then prayed, and the three-year drought that had plagued his nation ended with a pouring rain. But instead of being grateful for Elijah’s powerful ministry, the wicked queen was enraged and put out a warrant for his capture, dead or alive. And so Elijah ran.

When he finally collapsed under a broom tree, Elijah prayed that he might die. He was so exhausted and depleted that he fell asleep. He awoke to a gentle touch from the Angel of the Lord, who had brought him a jar of water and had fresh bread baking over a hot fire. Elijah ate, drank, then went back to sleep. For a second time, the Angel of the Lord touched him. With tenderness and compassion, He conveyed
the sympathetic heart of the Father:

If God was sympathetic and compassionate with Elijah, and He was, why do you think He would blame you for your weakness and weariness and woundedness?

God understands. But He won’t leave you in that depleted place. [tweet this]

Elijah was so terrified for his life that, after sleeping and eating, he ran for another forty days. But he couldn’t outrun God, who met him at the end of his journey and gently asked,

In the remarkable encounter that followed, God brought Elijah to a turning point — he had to choose between living in terror or trusting God with his future. Elijah chose to leave behind his fears and sense of failure and move forward to complete the ministry God had for him.

Sometimes we need an extra push to get out of the miry pit in which we’ve been living. And that’s often when God shows up. He seems to wait, quietly and patiently, until He knows we’ve reached the turning point. Then He gives us that extra incentive, just as He did for Elijah — and Hagar.

God leaned out of heaven and spoke to Hagar. And the first good, healthy choice Hagar made was to listen to the voice of God. Just the sound of His voice revealed that she and Ishmael were not alone after all! She had felt panicked that they would die alone in the desert and she had been convinced there was no one nearby to help. But she couldn’t have been more mistaken. God was with her. In spite of her stubborn refusal to cry out to Him, He was calling out to her — by name. Hagar…

And His word spoke peace to her heart when He said,

Instantly, the turmoil in her heart was replaced by a deep, quiet calm. If Hagar was like me…

I have experienced the difference God’s Word makes when I’ve been caught in a whirlpool of grief and despair. I will never forget when my son’s first marriage ended in divorce after seven years. He was deeply wounded. As in any broken relationship, he was also a wounder.

When I first became aware that his marriage was headed for destruction, his pain sent me into a wilderness of guilt. Every parenting mistake I had ever made came back to my mind like the replay of a horror movie in high-definition color. Like Hagar, I curled up into an emotional ball on the inside, blaming myself for all the things I had done wrong — as well as all the things I hadn’t done, should’ve done, could’ve done to prevent such a living death. Although I cried out to God, my self-flagellation drowned out anything He may have tried to say to me.

Finally, after an all-nighter of emotional turmoil, I was exhausted. As my spirit grew quiet, I slipped out of bed and opened my Bible. These verses fell off the page and into my heart:

O afflicted one, storm-tossed and not comforted, behold I will set your stones in antimony and your foundations I will lay in sapphires… your battlements of rubies… your gates of crystal… your entire wall of precious stones. [And] your… son will be taught of the Lord; and the well-being of your son will be great. — Isaiah 54:11-13 NASB (adapted).

(The noun son is plural in the original text. I took the liberty of hearing it in the singular, as God’s word of comfort and encouragement to me about my own son.)

Like Hagar, I was suddenly aware that God had been right there beside me all night. He knew I had been “storm-tossed” — tossed about by regrets, if-onlys, anger, frustration, grief, and fear. He had heard me sob into my pillow, begging Him to do something. The emotional pain had been so great I didn’t think I could catch the next breath.

When He addressed me as the afflicted one who could not be comforted, He reaffirmed that He knew me intimately, because I had revealed my agony to no one else. I knew His promises — of sapphire foundations, ruby battlements, crystal gates, and walls built with precious stones — spoke of Jerusalem, the home of God’s children. But I applied them to my home — that God would make it beautiful, a sparkling jewel-like display of His glory. Then deep peace flooded my heart when God reassured me that my son would be taught of the Lord through the experience of divorce, and in the long run, my son would not only survive, but grow into a stronger, more spiritually healthy person.

If you too are storm-tossed and not comforted, take a deep breath.

Could it be that you have not been listening to God’s voice? Really listening, with your eyes on the pages of your Bible.

I have no doubt that He is right there beside you. Maybe one reason He has allowed you to get sucked into this downward spiral of fearful desperation is to bring you to a turning point. Some people might describe it as the end of the rope. It’s that moment when you are so sick and tired of your misery, you are willing to change. If that’s where you are, I have good news: you are ready for the next step.

With peace in her heart and God’s reassuring words in her ears, Hagar was directed to

It was time for her to stop worrying and to start reaching out to her son. She needed to get her eyes off of herself, off of her circumstances, off of her past, and focus on the needs of another. She had to learn that it wasn’t all about her — or them.

The most poignant example of this antidote to emotional pain was given to us by Jesus Himself as He hung on the cross. Jesus — Lord of Glory, Bright and Morning Star, Son of God and Son of Man, Lion of Judah, the Creator of Life, the Light of the World, the Messiah — was hung naked from a cross at eye level beside the main road going into Jerusalem, with people walking by on their way to market as they were preparing for Passover. The ones who noticed Him mocked Him for the sign that hung over His head declaring Him King of the Jews. And how did Jesus handle such public humiliation and shame? He turned His attention to others: to His mother, who was lingering near the foot of the cross (John 19:26-27), and to the repentant thief, who was dying on the cross next to His (Luke 23:39-43).

Jesus’ example teaches a powerful lesson. He demonstrates that one way to overcome emotional pain is to focus on the needs of others — to reach out and help someone else who may also be suffering.

In some way we may not fully understand, helping to alleviate the suffering and pain of someone else actually helps to relieve our own.

The beautiful, tender, and specific instructions God gave to Hagar reveal the deep compassion of His father’s heart. Instead of telling Hagar to go get Ishmael some water, or to tell him to stop his bellyaching, or to tell him to get up because it was time to start traveling again, God told Hagar to “lift the boy up and take him by the hand.” God knew Ishmael needed the comfort of his mother’s physical touch. Sometimes enough has been said, and we just need to reach out and touch that other person. A hug, a hand on the shoulder, or a pat on the back often says more than words. The Lord understood that sometimes even a miracle isn’t enough; people need to be touched. And so…

He not only commanded that the leper be cleansed, He reached out and touched the untouchable (Matthew 8:3).

He healed Peter’s mother-in-law of fever when she lay in bed by touching her hand (Matthew 8:14-15).

He gave sight to two blind men, not only by telling them that their faith had made them whole, but by touching their eyes (Matthew 9:29).

He had compassion on His terrified disciples by coming to them and touching them when they had just seen Him transfigured in glory and had just heard His Father’s voice (Matthew 17:7).

Who needs your personal touch? Who is your Ishmael… someone who needs your helping hand to lift him or her up off the ground? We seem to be so quick to throw money at whomever it is, or call an agency to do something, or ask our church to get involved, or ignore the person completely. But maybe God has placed this person in your life because He knows that you yourself need the lift that comes from lifting someone else. Maybe the act of helping someone else will be the turning point for you.

Consider Anne’s questions in the last paragraph. If you need a turning point in your pain and are ready for healing, whom can you help today? Come join the conversation on our blog! We want to hear from you! ~ Laurie McClure, Faith.Full