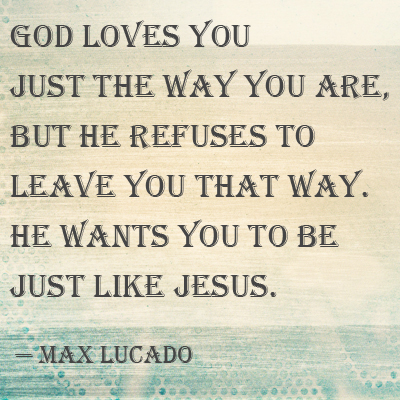 What if, for one day, Jesus were to become you? What if, for twenty-four hours, Jesus wakes up in your bed, walks in your shoes, lives in your house, assumes your schedule? Your boss becomes His boss, your mother becomes His mother, your pains become His pains? With one exception, nothing about your life changes. Your health doesn’t change. Your circumstances don’t change. Your schedule isn’t altered. Your problems aren’t solved. Only one change occurs.

What if, for one day and one night, Jesus lives your life with His heart?

Your heart gets the day off, and your life is led by the heart of Christ. His priorities govern your actions. His passions drive your decisions. His love directs your behavior.

What would you be like? Would people notice a change? Your family – would they see something new? Your coworkers – would they sense a difference? What about the less fortunate? Would you treat them the same? And your friends? Would they detect more joy? How about your enemies? Would they receive more mercy from Christ’s heart than from yours?

Would you still do what you had planned to do for the next twenty-four hours?

Pause and think about your schedule. Obligations. Engagements. Outings. Appointments. With Jesus taking over your heart, would anything change?

Keep working on this for a moment. Adjust the lens of your imagination until you have a clear picture of Jesus leading your life, then snap the shutter and frame the image. What you see is what God wants. He wants you to “think and act like Christ Jesus” (Philippians 2:5).

God’s plan for you is nothing short of a new heart.

“You were taught to be made new in your hearts, to become a new person. That new person is made to be like God – made to be truly good and holy” (Ephesians 4:23-24).

I’m going to risk something here. It’s dangerous to sum up grand truths in one statement, but I’m going to try. If a sentence or two could capture God’s desire for each of us, it might read like this:

God loves you just the way you are, but he refuses to leave you that way. He wants you to be just like Jesus.

If you think His love for you would be stronger if your faith were, you are wrong. If you think His love would be deeper if your thoughts were, wrong again. Don’t confuse God’s love with the love of people. The love of people often increases with performance and decreases with mistakes. Not so with God’s love. He loves you right where you are. To quote my wife’s favorite author:

God’s love never ceases. Never. Though we spurn Him. Ignore Him. Reject Him. Despise Him. Disobey Him. He will not change.

Our evil cannot diminish His love. Our goodness cannot increase it. Our faith does not earn it any more than our stupidity jeopardizes it. God doesn’t love us less if we fail or more if we succeed.

When my daughter Jenna was a toddler, I used to take her to a park not far from our apartment. One day as she was playing in a sandbox, an ice-cream salesman approached us. I purchased her a treat, and when I turned to give it to her, I saw her mouth was full of sand. Where I intended to put a delicacy, she had put dirt.

God does the same for us. He holds us over the fountain. “Spit out the dirt, honey,” our Father urges. “I’ve got something better for you.” And so He cleanses us of filth: immorality, dishonesty, prejudice, bitterness, greed. We don’t enjoy the cleansing; sometimes we even opt for the dirt over the ice cream. “I can eat dirt if I want to!” we pout and proclaim. Which is true – we can. But if we do, the loss is ours. God has a better offer. He wants us to be just like Jesus.

Isn’t that good news? You aren’t stuck with today’s personality. You aren’t condemned to “grumpydom.” You are tweakable. Even if you’ve worried each day of your life, you needn’t worry the rest of your life. So what if you were born a bigot? You don’t have to die one.

Where did we get the idea we can’t change? Jesus can change our hearts. He wants us to have a heart like his. Can you imagine a better offer?

The Heart of Christ

The heart of Jesus was pure. The Savior was adored by thousands, yet content to live a simple life. He was cared for by women (Luke 8:1-3) yet never accused of lustful thoughts, scorned by His own creation but willing to forgive them before they even requested His mercy. Peter, who traveled with Jesus for three and a half years, described Him as a “lamb unblemished and spotless” (1 Peter 1:19). After spending the same amount of time with Jesus, John concluded, “And in Him is no sin” (1 John 3:5).

He also refused to be guided by anything other than His high call. His heart was purposeful. Most lives aim at nothing in particular and achieve it. Jesus aimed at one goal – to save humanity from its sin. He could summarize His life with one sentence: “The Son of man came to seek and to save the lost” (Luke 19:10).

Quite the contrary. How pleasant were His thoughts! Children couldn’t resist Jesus. He could find beauty in lilies, joy in worship, and possibilities in problems. He would spend days with multitudes of sick people and still feel sorry for them. He spent more than three decades wading through the muck and mire of our sin yet still saw enough beauty in us to die for our mistakes.

But the crowning attribute of Christ was this: His heart was spiritual. His thoughts reflected His intimate relationship with the Father. “I am in the Father and the Father is in Me,” he stated (John 14:11). His first recorded sermon begins with the words, “The Spirit of the Lord is upon Me” (Luke 4:18). He was “led by the Spirit” (Matthew 4:1) and “full of the Holy Spirit” (Luke 4:1). He returned from the desert “in the power of the Spirit” (Luke 4:14).

Jesus took his instructions from God. It was His habit to go to worship (Luke 4:16). It was His practice to memorize scripture (Luke 4:4). Luke says Jesus “often slipped away to be alone so He could pray” (Luke 5:16). His times of prayer guided Him. He once returned from prayer and announced it was time to move to another city (Mark 1:38). Another time of prayer resulted in the selection of the disciples (Luke 6:12-13). Jesus was led by an unseen hand: “The Son does whatever the Father does” (John 5:19). In the same chapter He stated, “I can do nothing alone. I judge only the way I am told” (John 5:30).

The Heart of Humanity

Our hearts seem so far from His. He is pure; we are greedy. He is peaceful; we are hassled. He is purposeful; we are distracted. He is pleasant; we are cranky. He is spiritual; we are earthbound. The distance between our hearts and His seems so immense. How could we ever hope to have the heart of Jesus?

One of the supreme yet unrealized promises of God is simply this: if you have given your life to Jesus, Jesus has given Himself to you. He has made your heart His home. It would be hard to say it more succinctly than Paul did: “Christ lives in me” (Galatians 2:20).

He has moved in and unpacked His bags and is ready to change you “into his likeness from one degree of glory to another” (2 Corinthians 3:18). Paul explained it with these words: “Strange as it seems, we Christians actually do have within us a portion of the very thoughts and mind of Christ” (1 Corinthians 2:16).

If I have the mind of Jesus, why do I still think so much like me?

Part of the answer is illustrated in a story about a lady who had a small house on the seashore of Ireland at the turn of the twentieth century. She was quite wealthy but also quite frugal.

The people were surprised, then, when she decided to be among the first to have electricity in her home.

Several weeks after the installation, a meter reader appeared at her door. He asked if her electricity was working well, and she assured him it was. “I’m wondering if you can explain something to me,” he said. “Your meter shows scarcely any usage. Are you using your power?”

“Certainly,” she answered. “Each evening when the sun sets, I turn on my lights just long enough to light my candles; then I turn them off.”

No doubt about it: God has ambitious plans for us. The same one who saved your soul longs to remake your heart. His plan is nothing short of a total transformation:

He decided from the outset to shape the lives of those who love Him along the same lines as the life of His Son. – Romans 8:29

You have begun to live the new life, in which you are being made new and are becoming like the One who made you. This new life brings you the true knowledge of God. – Colossians 3:10

God is willing to change us into the likeness of the Savior.

Shall we accept His offer?

What about you? Are you willing to let God have His way in changing you from the inside out into the likeness of His Son, Jesus Christ? Come join the conversation on our blog! We would love to hear from you about gaining a heart like Jesus’! ~ Devotionals Daily 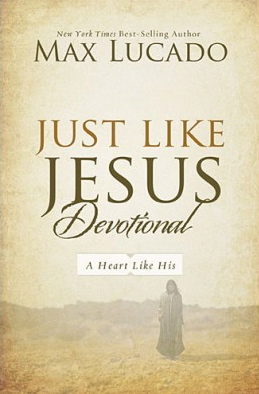