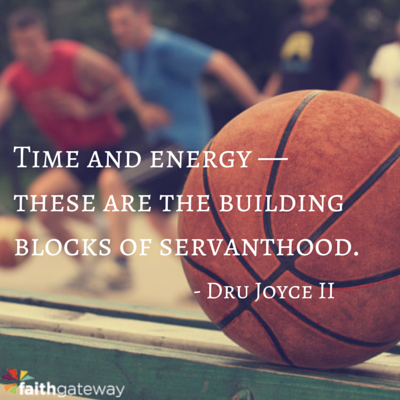 When people step away from the habit of “taking” and enter the space of “giving,” I believe they become not only more fulfilled but healthier spiritually.

Giving back is like a statement to the heavenly Father that says, Thank You for what You’ve given me.

It’s like a nod of gratitude combined with a battery pack that energizes possibility for someone else.

I’ll give an example. We always had events and activities going on as part of our church’s youth ministry, of which I was the director. One of the things I fondly remember doing was volunteering with the kids on a Habitat for Humanity project.

This amazing Christian housing ministry, founded by Millard and Linda Fuller in 1976 under the guiding principle that every man, woman, and child should have a decent, safe, and affordable place to live, gave us a chance to build homes from the ground up for families in need.

I recall one of the first times we reported for duty as a group to begin our work at one of the homes. We showed up at our designated site at the crack of dawn, not quite knowing what to expect, all of us humbled by the vacant expanse before us where this home was to be erected. Just the act of gazing on this massive emptiness gave us such perspective, showing us the physical reality of what it means to have a home at all. It made us instantly grateful for our own dwelling places, hitting each of us with the reality of how much we take for granted on a daily basis, when many folks don’t even have four walls and a roof to call their own.

At first we all looked at each other, wondering how this would all play out. We didn’t know anything about carpentry, much less about the elaborate engineering elements that go into constructing a home. We almost couldn’t believe the task we had taken on, but there we were, united in the fact that we had, for better or worse, agreed to do this. But of course, the Habitat program had been around long enough that its managers knew exactly what they were doing. There was an organized, preplanned protocol in place, which made it possible for anyone to walk onto a site and do a job. We were separated into groups, and each one received a set of instructions, along with the tools and hardware necessary to accomplish our tasks. We got hammers, nails, screwdrivers, wood, levels, and saws — all kinds of equipment we needed to do the work. Team leaders helped manage each task, and slowly but surely, we were on the way to creating something together.

The look on the kids’ faces meant everything to me, as I saw them tap into the understanding that they were actively giving their time, their energy, for something that had absolutely nothing to do with their own wants or needs.

In those moments they got a real taste of sacrifice.

I’m sure many of the kids (and I too) would have preferred spending that Saturday at the gym playing hoops or running around a football field or goofing off at Perkins Pool. But we used our time that day to serve Habitat and the people who would one day live in the home we helped build. And not only was our service inherently a positive thing, but it also felt incredibly good, despite the hot sun and hard work.

This attitude of service wasn’t shared only with the kids at church. As a coach, it was always crucial to me that my players understood the value of having the heart of a servant.

During the holiday season, a local church created food baskets for needy families. It may not sound like a major feat, but the labor that went into making these baskets and getting them to the right places was beyond tedious and took a lot of time and energy.

Time and energy — these are the building blocks of servanthood.

The boys and I helped unload tractor-trailers full of fifty-pound bags of potatoes and cases of canned goods. We carried them to the church basement, where volunteers sorted them. Do you think a bunch of teenage boys wanted to do this type of labor? We all know the answer. Sure, I’d hear the occasional grumble or wisecrack, but I knew that at the end of the day, they were glad they had helped out. These moments injected them with a sense of empathy for the needy families that would benefit from their diligence, and it also gave them quality time to bond as a group off the court, when they could tap into other aspects of life that were just as important, if not more so, than their own basketball-related desires and goals.

Sometimes we got together to serve meals at local homeless shelters, which was always eye-opening and humbling, even for the kids who weren’t in the best situations themselves. During those moments I couldn’t help but think of my own parents, who occasionally worked as servers at a country club for the rich just to make ends meet. And here we were, serving food to the poor. It helped show me the struggles of life are relative, and in one way or another, we are all always helping one another. Or at least we should be.

Just as I encouraged the players to give as much and as often as they could, my wife and I also did our best to help the boys on the team if they needed anything. Whether it was clothes or books for school or money to put on their ID cards for lunch — whatever it was, giving back gave us a sense of purpose beyond our roles as parents and husband and wife. It cemented the commitment we pledged to them — me as their coach and Carolyn as my noble accomplice. After all, how many road trips and caravans did my wife copilot, helping me transport a slew of sweaty, excited boys and their gear to this or that tournament? How many games did she videotape for us so we could analyze the team’s performance afterward? And how many weekends did she give up her own time to cook for and look after the boys who camped out at our house? For all my years of service as coach and mentor, Carolyn was also making tremendous sacrifices so these boys could live out their dreams.

I always tried to help my family and my players see that by sharing these blessings with others, they were actually creating more blessings for themselves. I’m proud to say both of my daughters embrace this message in their own lives, as they are involved in professions of service.

My oldest, Ursula, has worked for several nonprofit organizations that serve people seeking to get their lives together and people who have suffered head trauma. She’s currently starting her own consulting company to help service organizations meet government standards and earn grant money. India started her own nonprofit called STARS (Sisters Transforming and Reaching Success), which helps teenage girls through the trying times of adolescence. And now my youngest son, Cameron, is beginning his own journey into coaching.

At the end of the day, it isn’t so much about what you do but more about the fact that you’re doing something to help others.

It’s the intention, the conscious allotment of time and energy to something that may not be the exact thing you feel like giving it to at that moment.

When I first started participating in these types of service, I wasn’t always sure I understood the significance. But then I’d come across a player who would return, a little older, looking for a way to help, to give back. I can think of at least twenty guys right now who have at some point come back and found a way to give back. And truthfully, this commitment to service is at the heart of Bron’s “return” to Cleveland, which took place just as I was finishing this book.

Now the reason I put quotes around “return” is that, as anyone who lives in Akron can tell you, Bron never really left. Yes, he went to the Heat for four years, but he remained a part of Northeast Ohio, both emotionally and physically. His LeBron James Family Foundation continued to create opportunities and provide support for children in the area, and he remained a constant — and beloved — presence around Northeast Ohio in the off-season.

After Bron opted out of his contract with the Miami Heat, a lot of folks assumed I had inside information about his next move. But honestly, I didn’t know. I did, however, suspect he might come back to the Cavs because I knew just how much this area means to him. I knew that giving back to his community would weigh into his decision just as much, if not more, as what was best for him in his basketball career.

This is what Bron alluded to when he wrote in Sports Illustrated that his presence can make a real difference in Northeast Ohio. Forget about the money his return to the Cavs will bring to the area, or even the civic pride the community will feel when the team eventually wins a championship, which I believe in time it will.

Instead, what Bron is alluding to is this idea of giving back, of serving one’s community through one’s time, energy, and effort.

Excerpted with permission from Beyond Championships by Coach Dru Joyce II, copyright Zondervan 2015.

Has there been a coach in your life who has made an impact on your faith and spiritual growth? Join the conversation on our blog! We’d love to hear your stories about coaches who have made a difference!

Watch the Video for Beyond Championships

The Beyond Championships Book Sweepstakes

Enter here for a chance to win a pair of LeBron James’ shoes signed by LeBron and a signed copy of coach Dru Joyce II’s new book Beyond Championships! The Sweepstakes is open to all legal residents of the United States eighteen (18) years of age and old as of March 3, 2015. The last entry will be accepted March 24, 2015 at 12:00 p.m. (ET).