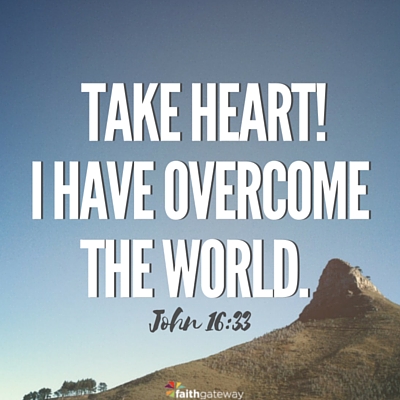 Our anxiety does not empty tomorrow of its sorrows, but only empties today of its strengths. — Unknown

From my many experiences, I believe some of our anxiety and fear comes from an improper view of reality. I’m not saying our threats — real or perceived — might not be legitimate; I am saying that our reactions to these threats are often faulty.

Simply put, we think things we shouldn’t be thinking.

Worry and fear ultimately result from a belief that God is not actually in charge or that He doesn’t care about us. We don’t believe He is in authority or we believe He is not active in our lives. Yet neither of those statements is true. If we truly believed that God is good and He is sovereign, then we would be able to rest in these beliefs as facts. But we don’t. I’d like to believe I am above such thinking, but I struggle just like you.

Some of what is so terrifying to us links to one of our deepest fears: the fear of death. At the core of many panic attacks is the idea that we (or someone we love) will die. Why? What’s wrong with dying? I’m sure it’s uncomfortable, but if we believe the Bible, then it’s merely a transition from glory to greater glory. For the Christian, it’s a step up. Why all the fuss then? Because the unknown is scary — especially events that, once done, cannot be undone.

I’ve read the Bible countless times, I’ve studied death ad nauseum, and I’m still not okay with the concept. I want to be like some of the folks in my congregation who have the attitude of, “Bring it on!” I desire to be a “walking dead man” like the apostle Paul, who couldn’t wait to move on to be with Jesus. But I’m not.

Part of what’s standing in my way is this darn anxiety disorder. When I’m thinking clearly and not under its influence, I’m at peace with my mortality. When a panic attack is in full bloom, however, I’m absolutely terrified of death. On good days, my reasoning and theology tell me my life is in God’s hands and nothing can happen to me without His approval. But when I’m in a bad season, every little thing seems up for grabs and comes into question.

Did you know the Bible calls death an enemy? Right there in 1 Corinthians 15:26 —

The last enemy to be destroyed is death.

Adam and Eve were told not to eat of the tree lest they “would surely die.” God made them to live forever, but sin wrecked that plan, and death was the result. Paul says Satan has used the threat of death as a bullying technique for millennia.

Part of what Jesus Christ came to do was defeat death, by rising from the dead and making a way so those who follow Him — His children — might never truly die. They will physically die, but their afterlife with God is already secured. Death’s only purpose then is to free us from this world so we might be placed safely in God’s arms, delivered and whole.

The bottom line is this: Jesus has done the extraordinary and has defeated death. He took the sting — the permanence — out of it. We no longer have to fear the ramifications of the end of life. When that truth travels the short distance from our brains to our hearts, our peace will grow.

One of my favorite stories in the Bible is about the Hebrew boys Shadrach, Meshach, and Abednego (Daniel 3:1–18). They were commanded by a pagan king to bow down before his gold idol in honor of a false god. They refused to do so, so he ordered them thrown into a blazing hot furnace to be burned alive. Their response was brilliant. They said, and I paraphrase, “Our God can save us from this fire, but even if He doesn’t, we still won’t bow down to your false god.” I love that perspective. Maybe it’s one we can adopt in our hearts, one that says, “God can rescue us from all our dangers and fears. But even if He doesn’t, we refuse to bow down before the bullying enemy of fear, because we know all that’s truly important is already secured by God and that this life can’t do anything to us.” Wow! How powerful would it be if we lived that way?

This story is also proof that not all fears are irrational. It was not irrational for…

But those are the types of fears God tells us to set aside in light of who He is and what He can do. One of the greatest and most popular commands in the Bible is, “Do not be afraid.” Every time God repeats this phrase, the person He is speaking to has every right to be afraid. The danger is legitimate, but God’s presence overshadows all the facts. Faith is hanging on to the truth in the face of overwhelming emotional demands.

The fact is God is big — super big. He’s bigger than our problems, fears, worries, and anxieties. He’s actually more real than our chemically induced, warped views of life, our dysfunctional childhood patterns of thought, and our culturally derived, overblown views of who we are. There is nothing outside of His scope of authority. There is no problem too small that He would miss it or too big that He cannot solve it.

God was the One who spoke the universe into existence. Nothing was preexisting. He made it all — from nothing. Lack of materials and resources has never been a concern for Him.

In the beginning God created the heavens and the earth. The earth was barren, with no form of life; it was under a roaring ocean covered with darkness. But the Spirit of God was moving over the water. — Genesis 1:1–2 CEV

When the world fell into sin, the Almighty didn’t sit back and ponder options with the angels. He merely put into place the plan of redemption that was prepared before the foundation of the world. God is always ahead of the curve. Nothing catches Him by surprise. No limitations sway Him. For those of us who fear, this is great news.

When God decided to flood the earth and start over with His one true follower, Noah, and his family, He initiated a plan in advance for Noah to build a boat and fill it with all species of animals (Genesis 6). Who else would have thought of that?

When Shadrach, Meshach, and Abednego were thrown into the fiery furnace to be burned alive, Jesus showed up in the fire to rescue them (Daniel 3). Who else would have thought of that option, much less actually done it?

When 185,000 Assyrians surrounded Jerusalem to destroy it, one angel wiped them out while they were sleeping (Isaiah 37).

When Haman was going to slaughter the Jews, God used a beauty queen on the inside to turn the tables and free His people (Esther 5).

And how could God have possibly transported the reluctant prophet Jonah to Nineveh? Boat — storm — giant fish — barfed up on the beach (Jonah 2). Really? Yes, really.

God is not fazed by our problems. But we are. In fact, we freak out. So many of our anxieties aren’t based in reality, but they feel real to us. What’s the solution? We must work on getting our heads back into the game of reality — God’s reality — the One who came up with and pulled off every scenario I listed above.

As I was going through one particularly bad season of life, my counselor shared a few thoughts that had an impact on me. She said, “The promise of a secure, positive final outcome allows peace in the present.” The promise of a future deliverance allows us to dwell in what she called “impending safety.” We are all familiar with “impending doom,” but what if the very presence of God and our relationship with Him demanded that we view things in light of impending safety?

What if knowing the end of the story helped us to embrace true life in the midst of the story? What if we really believed the truth that the Enemy is not stronger than our Comforter?

If God says we are ultimately safe, then we are, regardless of how we feel about it.

Whether our challenges and threats are fact or fabricated, our response must be to keep our eyes on Jesus and off the waves, exactly what Peter did when he walked on water to Jesus. We choose that perspective — the miraculous, not the mundane. The Enemy might be able to lure or tempt us to fixate on our problems, but it’s our choice to refocus on our only solution: the Lord. We must ground ourselves with a solid view of who God is.

A lot of my battle with fear and anxiety is waged in my mind, in my thoughts. I am fighting a war that no one else even sees. Where my mind goes is where my body tends to follow. If I think anxious thoughts, then my body tenses up and restricts my breathing. If I can shift over to thinking about the freedom, victory, and rescue that God provides, I might get a shot at finding peace.

God gave us the ability to rally our thoughts back to reality. God tells us to keep our minds fixed on Him. He tells us that instead of looking at our troubles, we should stare unwaveringly at His face. And when God gives a command, it’s a sure sign He has given us the ability to take action. Praise the Lord — we have a fighting chance!

I have told you these things, so that in me you may have peace. In this world you will have trouble. But take heart! I have overcome the world. — John 16:33 NIV

Excerpted with permission from How to Live in Fear by Lance Hahn, copyright Lance Hahn.

God is bigger than our problems, fears, worries, and anxieties. Are you buoyed by that truth? Today, let’s keep our eyes on Jesus and remember that He is Lord over any storm! Join the conversation on the blog! We want to hear from you! ~ Devotionals Daily