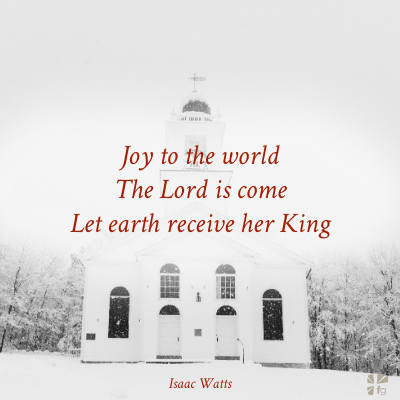 Imagine the scene in Bethlehem. It was the night of nights, and yet it had begun as every other night had before it. In Bethlehem’s houses mothers lay their children down to sleep. In the courtyards of the inn some camels lay down to rest. In the fields the sheep lay down while the shepherds sat near their fires. In the heavens above appeared the same stars that had shined throughout all the ages, ever since God had made the stars to rule by night.

Here in the dark cave, as a flickering torch casts high shadows of long-horned oxen on the rough-hewn logs, there is no sound but the munching of hay by the cattle. In the midst lies the young mother, forgetting for the moment her discomfort, for in her arms lies the Babe, her baby boy.

Who would dream that He is the King of kings and Lord of lords? Those chubby little hands that clasped the straw in His manger crib were soon to open blinded eyes, unstop deaf ears, and still the troubled seas. That cooing voice was soon to be lifted to command demons to depart, to teach men of the Way, and to raise the dead. Those tiny feet were to take Him to the sick and needy and were finally to be pierced on Calvary’s Cross.

That manger crib in remote Bethlehem became the link that bound a lost world to a loving God. From that manger came a Man who not only taught us a new way of life, but brought us into a new relationship with our Creator.

Joy to the World

Now there were in the same country shepherds living out in the fields, keeping watch over their flock by night. And behold, an angel of the Lord stood before them, and the glory of the Lord shone around them, and they were greatly afraid. Then the angel said to them,

“Do not be afraid, for behold, I bring you good tidings of great joy which will be to all people. For there is born to you this day in the city of David a Savior, who is Christ the Lord. And this will be the sign to you: You will find a Babe wrapped in swaddling cloths, lying in a manger.”

And suddenly there was with the angel a multitude of the heavenly host praising God and saying:

“Glory to God in the highest, And on earth peace, goodwill toward men!”

So it was, when the angels had gone away from them into heaven, that the shepherds said to one another, “Let us now go to Bethlehem and see this thing that has come to pass, which the Lord has made known to us.” And they came with haste and found Mary and Joseph, and the Babe lying in a manger. Now when they had seen Him, they made widely known the saying which was told them concerning this Child. And all those who heard it marveled at those things which were told them by the shepherds. But Mary kept all these things and pondered them in her heart. Then the shepherds returned, glorifying and praising God for all the things that they had heard and seen, as it was told them. — Luke 2:8-20

Imagine the scene that night. What must it have been like for Mary? For Joseph? For the shepherds? Come join the conversation on our blog! We’d love to hear your thoughts! ~ Devotionals Daily