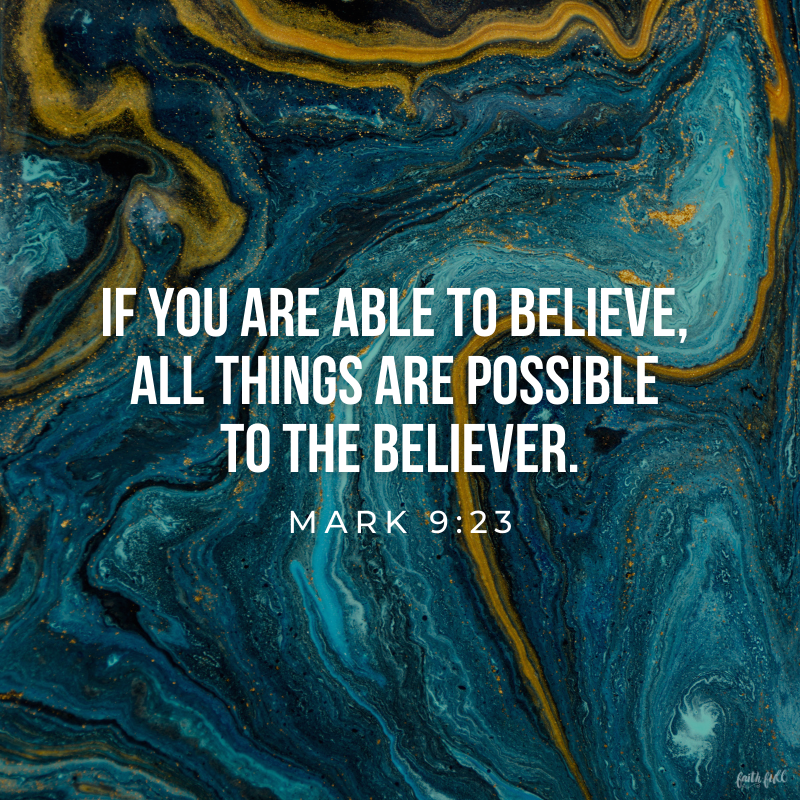 The consulting room finally stopped spinning, and I opened my eyes again. I felt numb, body and soul. I sat frozen in the metal chair, staring dully at the faded and picked blue carpet.

We had arrived at Our Lady of the Lake Hospital just this morning knowing that we were likely facing something serious but holding out hope that by some miracle our appointment would rule out real trouble, not reveal it. No more than ten minutes in, the neurologist had sent us downstairs for an immediate MRI. The nurse had grabbed my mother-in-law’s arm and whispered, “Good luck.” She knew. But really, hadn’t we all? Denial had just suppressed our potential for pain.

But here it was, bubbling to the surface.

As much as I wanted to cry uncontrollably, I couldn’t. I needed some way to lance the devastating pain that was ballooning inside me, but the flood of tears refused to come. And that shamed me. Why wasn’t I bawling? What kind of mother was I?

Maybe I was in shock. I remembered getting in a car accident as a teenager and feeling the same way — numb, distant, as if my surroundings weren’t real. It was almost as though I was off to one side, watching myself.

But there might have been another reason for my lack of reaction. I was also seven months pregnant with our second — and surprise — daughter. Already emotional and tired from the baby I was carrying in my arms and the one I was carrying inside me, maybe I just didn’t have the capacity to feel anything more.

Whatever was behind my fog, it was a gift of some sort because, at least for now, I didn’t have to face the feelings that defied expression, the emotions that threatened to crush the life out of me and bury me beneath them.

The doctor leaned against her desk, carefully gauging my reactions. I could read pity in her eyes, and I despised it. I felt exposed and helpless and overwhelmingly vulnerable; this crisis was so far beyond the scope of my control.

As much as I hate to admit it, I like control because it gives me a sense of security. It tells me that whatever I have a tight grip on is safe. Sure, I may be squeezing the life out of it, but it gives me a sense of power and that temporarily relieves my anxiety. In my heart I know this isn’t true. I know my grasp is fallible and lacking, and I also know that my only true safety comes when I release my grip and depend on the ability of God. Yet something in me still resists letting go. Something in me finds it hard to trust.

As we sat with the doctor, I knew that it was impossible, even with my best effort, for me to change this brain tumor diagnosis. There was nothing I could do, and that’s a terrible feeling. Yet in the midst of this helplessness was a voice I recognized. It was small, steady, and somewhere down deep. It was hope, keeping me upright like an anchor inside. Constant but never shouting. Strong but tender. Ready but not demanding. This hope pointed me to Jesus and kept whispering His name.

I’ve seen myself reflected many times in the distraught face of the father mentioned in Mark 9. He cried out to Jesus in anguish over his son, who had been tormented by Satan for years. He was a good dad. He wanted to help his son, so he begged Jesus,

Like many of life’s situations, this was bigger than the father’s capacity, and he couldn’t find anyone with enough ability to help him. As He always does when we ask, Jesus stepped in for this father. He didn’t panic. He simply took control. He knew He had authority over demonic spirits, but hearing the father’s unbelieving heart, He wanted the man to learn to trust Him. Knowing this wouldn’t be the only moment of need in this father’s life, Jesus wanted to teach him to have faith. So He told the father,

If you are able to believe, all things are possible to the believer. — Mark 9:23 TPT

The man’s response was exactly what Jesus was looking for:

God’s parenting is amazing, isn’t it? He doesn’t ask us for perfection. He simply wants a heart that is willing to trust Him: Lord, help. I wonder how many times I’ve leaned into helplessness more than hope.

There are times when, though they seem like strangers, hope and helplessness reside right next to each other in the human heart.

On the one hand, we long to believe that God will do a miracle, that He has complete control. On the other, we feel helpless that things may never change, that what we face might be too big for God’s ability.

I’m not sure why there are some situations where I look to God as my second or third or fourth option. Perhaps it’s because I want something tactile, tangible. If I can touch it, I tend to think I can trust it. But I want to learn to be more like this father. Instead of grasping for control, I want to learn to say, “Lord, help.” Not leaning on my ability but remembering that it is Jesus who is actually in control. It never fails that the more I interfere and try to control, the more I make a mess of the situation. Even when the situation is my own heart.

The Gift of Presence

The doctor’s diagnosis, her statement that Haven didn’t have long to live, reverberated in my head. Slowly a sense of clarity returned, but it was far from comforting. As the fog lifted, I woke up to the frightening reality that only a miracle could save my little girl.

As with the father in Mark 9, Help my little faith was my sincere cry. I believed in miracles. I had witnessed God do the seemingly impossible in my life. I’d seen Him restore family members to health and provide finances for Casey and me when we were in need. But never had I faced any trial of this magnitude, these life-or-death stakes. I fought to remember that God was present, that He had a solution, that someway, somehow, He would intervene.

With so many unknowns, the what-ifs consumed my mind. What if I can’t endure this? What if this tumor damages Haven’s brain permanently? What if it takes her life?

With nothing to distract me, fear was rising. I needed words of encouragement, the familiar touch of someone who loved me, someone to look straight into my eyes and speak words of faith to me. Thank God we serve a Savior who anticipates our needs before we feel them and already has a plan.

Within a short time after Haven was admitted, family and friends began to arrive. Teary-eyed sisters, brothers, parents, friends, and pastors surrounded us, encouraging us not to give up hope. If we were floating at sea, clinging to a capsized boat, then the Coast Guard had just appeared for us. And just the sight of that help created a surge of hope in me:

I can do this. I am not alone. God has made me strong, and there are people around who love me.

With each person who entered the room, I exhaled a little more, breathing a little more calmly. Simply knowing we were surrounded by so many loved ones was like a shot of endurance in my arm.

By five that evening, several hundred people had gathered in the hall outside our hospital room. I could hear the commotion and wondered when the nurses would order everyone to leave. I was hoping they would put up with the craziness as long as possible, because the visitors’ presence was helping me.

It was comforting and encouraging to experience such care and concern from so many people. There were moments when their company would take my mind off my crisis and I’d almost believe that life was normal again. I’d be laughing among friends, and my heart would feel momentarily free. But then reality would suddenly hit me. I would remember that Haven had a brain tumor the size of a lemon in the back of her head and that the doctor had said she would probably die. Then panic and dread would once again seize my heart.

I had no idea how to handle a crisis like this publicly, even in front of these people who loved me. Do I let go and completely fall apart in front of everyone? If I did, I wasn’t sure I would be able to recover. I knew no one really expected me to be Wonder Woman, but I wasn’t ready to be so vulnerable in my pain. So, I projected a brave face, while underneath the apparent courage I was frightened to death.

In a matter of a few hours, everything in my world had shifted. Instead of getting dressed for that night’s youth service, I sat in a hospital room as the crowd thinned and people went home. They left us with prayers and love and, thanks to my mother, clean clothes.

Finally, long hours after we were admitted, the hospital floor grew quiet and the lights in our room were dimmed. I sat in a rocking chair with Haven on my lap as Casey rested against the side of her hospital bed. Lost for words, we did not speak. I could hear Casey praying under his breath. A stillness filled the air. A reprieve from all the noise of the previous hours should have been welcome, but I suddenly wanted the rush of people again. Without the movement and chaos, the fears I had fought to suppress now surged to the surface, and it was hard to face them.

The questions sneaked out around the barrier I had tried to erect.

If Haven lives, will she be normal? Will I be able to endure the long road ahead and face whatever happens? Why is this happening to me?

Forced into stillness and relative solitude, I struggled to maintain my composure, but my pent-up emotions demanded release. The tears I had tried so hard to muster during the day now wouldn’t stop flowing. Unchecked, they coursed down my cheeks onto Haven’s tiny body.

More minutes of deafening silence passed. Then, like a deep and resonant bell of hope and faith, Casey’s voice rang through my grief.

“We’re not giving up on God.” It was a statement, a declaration — bold, firm, resolute.

He sounded different from the devastated father who hours earlier had been knocked to his knees. Now his voice was steady, strong, and unwavering as he looked into my eyes.

“Even if things don’t go our way, even if this road is long and, God forbid, we lose her — if God doesn’t heal her — we are not turning our backs on Him,” he said. “We’ve come too far to turn back now. Stacy, God has been too good, too faithful, and I choose to trust Him for her healing. Are you with me?”

Sometimes our world get turned upside down in a completely unexpected moment. Stacy shares her story and her faith so we can also breathe again in our own story. Jesus always has us and will always be with us come what may! Come share your thoughts with us on our blog. We want to hear from you about our God who has been too good and too faithful for us to turn our backs on Him! ~ Laurie McClure, Faith.Full