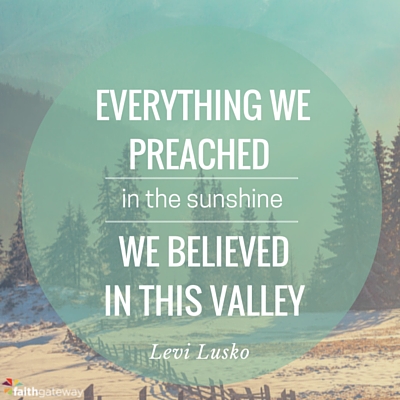 I pulled my five-year-old closer to my chest and planted a kiss on the top of her head. I was reading about the memorial services for the victims of the Sandy Hook Elementary School shooting. My daughter Lenya was sitting on my lap, snuggling me. We had nicknamed her “Lenya Lion” for her ferocious personality and full head of hair, which had been wild and mane-like since birth. She watched Mickey Mouse Clubhouse on the TV as I read the news and drank coffee.

In our house, Friday is Family Day. It was all planned out. Breakfast out, ice skating, and a special dinner at a fancy restaurant. A dance party in the middle. Music and laughter. Giggles and snuggles. Lots of wardrobe changes.

This Friday, Family Day was extra meaningful. We were in the ramp-up for nine Christmas services at our church that would begin Saturday. There had been extra meetings and events filling up not only days but nights as well. The week was packed, much worse than normal.

We had told the girls, “This is crazy, but Friday is coming!”

But you can’t get to Friday without going through Thursday, and on Thursday, December 20, the bottom dropped out.

When I am working on a message I’ll be preaching, there is a fire under me as Saturday and Sunday approach. The process begins on Monday, and I prefer for it to end on Thursday so that I am able to enjoy Friday without it looming over me. At times writing a message feels like wrestling an octopus to the ground in the dark, but on this day it flowed. I took a late afternoon lunch break to work out. When I got home, my family was about to leave to run errands and then attend a birthday party. Lenya bent down, carefully untied my red Nikes, and pulled them off my sweaty, stinky feet.

I got frustrated when I realized I was saying good-bye for the evening. I had just a little bit of work to do, but because of a late-night scooter party illuminated by my headlights, my car battery was dead. I would be stuck at home and unable to join them when I finished. Oh well. I hugged them all and helped load them in the car.

Lenya forgot her jacket. I went back to get it and handed it through the window.

It was the last time I would hear her voice or see her smile.

When I finished my message the house felt so empty. I wished I were with the girls at the party. As the day gave way to night, Jennie arrived by herself. She had gone to the birthday party with Alivia, Lenya, Daisy, and Clover and then dropped the girls off at her mom’s so she and I could wrap Christmas presents.

We finished with the gifts, and we got in the car to pick the girls up, texting her mom that we were coming. On the five-minute drive I announced, “I just feel so relaxed right now.” Thinking of the Family Day ahead of us and how happy I was to spend some quality time with the girls after a busy week put me at ease.

We pulled up to the house, and immediately the tranquility broke. Jennie’s younger brother ran out to meet us, yelling about Lenya not breathing. Jennie ran in to find her mom, Sylvia, trying to give Lenya an asthma treatment. Lenya looked up and saw her mommy enter the room just before her eyes rolled back and she lost consciousness.

Lenya had gotten a little wheezy while sitting on the couch playing an iPhone game. This is not unusual. I have had asthma almost all my life, and both Lenya and Alivia have it too. We keep their medicine with them at all times. But this time it didn’t put a dent in the attack. Jennie’s mom had tried to call us, but Jennie’s parents live in a cellular dead spot, so once we turned onto their road, we lost all service.

By the time I got into the kitchen, Lenya had already blacked out. I rushed to her and took over, putting the nebulizer into her mouth.

As if I were watching storm clouds gathering in the sky, I sensed myself beginning to panic. She wasn’t breathing.

I told Sylvia to call 911, and I began to do CPR as well as I could remember while an ambulance was dispatched. Jennie was hysterical, and I wanted to join her. I remember her crying out to God and begging Lenya to breathe over and over again as I gave chest compressions with trembling hands. I put my lips to Lenya’s and felt my breath fill up her lungs. God gave me the strength to remain calm, to be there, to fight for her. I felt her take one shallow breath and thought she was coming back to us, but it never happened again.

When the paramedics arrived and took over, I saw it in their faces. As they worked to save Lenya, I asked one question: “Is her heart beating?”

One of them answered, “No, not right now.”

The paramedics loaded her into the ambulance, and we raced to the hospital. The same hospital where Lenya was born. In the ER waiting room, Jennie and I held each other and begged God for a miracle—until the doctor appeared to tell us there was nothing they could do. Would we like to go in and be there as they stopped working?

We pushed past him and raced behind the curtain. We fell on our knees and pleaded for the God who made the sun stand still and raised Jesus from the dead to send Lenya back into her body. Instead, the sun set.

When a woman’s husband dies, she is called a widow. If it’s the husband who survives, he becomes a widower. Children who lose their parents are called orphans. But what do you call a mom or a dad who has had to face the death of a child? There is no title for that. I suppose that is because there really are no words to describe such a thing.

Waves of suffocating sorrow threatened to smother us. We sobbed from the depths of our souls. If tearing my heart from my chest would have helped Lenya, I would have done it. I hated the world for not having her in it any more.

Though we were afraid, we were not alone. We experienced peace that passes understanding.

Everything we preached in the sunshine we believed in this valley—the valley of the shadow of death.

We lifted our hands to the air, right there in the ER, and blessed the name of the God who gives and takes away. Just as we dedicated Lenya to him when she was born, we committed her to him again. We thanked him for the honor of being her parents and for five beautiful years with her. We confessed our faith in the resurrection of Jesus and put our hope in him anew. On the floor of the emergency room, we intuitively sensed that our worship was linked to the pulse and frequency of heaven. We felt a nearness to her in it, and we leaned into it. We were on holy ground.

We held her hands. Even with the tubes and the equipment and the wires, she was stunningly beautiful. We kissed her face and stroked her hair and cried. Her eyes were open. She was wearing pajamas. Red leggings, a T-shirt, and socks. Her shirt had been cut open. I reached out and closed my little Lenya Lion’s eyes.

The doctor later explained that medically she was coded as nonresponsive by the time the paramedics arrived. Simply put, she was already in heaven before we got to the hospital. Strangely, that brought me comfort, knowing that Lenya’s final moments on earth were with us and not strangers. Her mother’s voice was in her ears, and she was held by her daddy’s hands as I gave her CPR. She went straight from my arms to the arms of her Heavenly Father in paradise. Lenya had gone home for Christmas.

We, on the other hand, were stuck here on this fallen planet, about to experience the furthest thing from a heavenly Christmas as you could get.

By this point Lenya’s three sisters were in the hospital waiting room. Alivia, seven at the time, was the only one awake. She asked where Lenya was. We told her that Lenya was with Jesus in heaven.

Alivia began to cry. “Stacia told me she was going to be okay,” she sobbed. Stacia is her aunt who was eleven at the time. When the ambulance had come, they had watched Lenya being loaded up, and Stacia had tried to comfort her niece by telling her she was going to be okay. We assured Alivia that Stacia was right and that Lenya was better than okay— she was perfect.

Watch the Video for Through the Eyes of a Lion

Excerpted with permission from Through the Eyes of a Lion by Levi Lusko, copyright Thomas Nelson.

The Christmas season can be a beautiful time of year, but also painful for so many who have lost someone. Join the conversation on our blog around today’s devotional. We’d love to hear from you. ~ Devotionals Daily