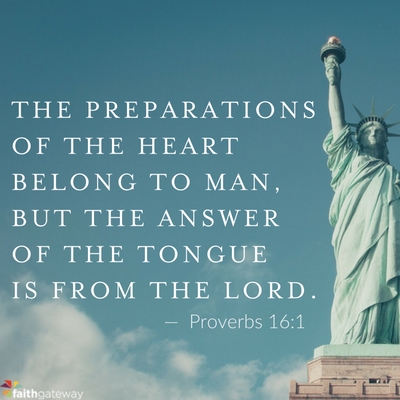 Voting is the most basic way citizens participate in a democracy.

By voting, we help determine who will make the laws and protect our liberties.

Unfortunately, people of faith often vote at an alarmingly low rate. When believers fail to vote, is it any wonder that policies contrary to our core values are enacted? America’s leaders have always understood the importance of voting:

If America is to survive, we must elect… individuals who will seek Divine guidance in the affairs of state. — Billy Graham, evangelist

The people are responsible for the character of their Congress. If that body be ignorant, reckless, and corrupt, it is because the people tolerate ignorance, recklessness, and corruption. — President James A. Garfield

God commands you to choose for rulers, just men who will rule in the fear of God. The preservation of a republican government depends on the faithful discharge of this duty; if the citizens neglect their duty and place unprincipled men in office, the government will soon be corrupted. — Noah Webster, the “Father of American Scholarship and Education”

Everlasting God, You know the hearts of all those involved in politics. Compel them to seek wisdom from You and from Your people.

Let us be strong for our people and for the cities of our God. And may the Lord do what is good in His sight. — 2 Samuel 10:12

Pick out from among you three men for each tribe. — Joshua 18:4

Since the founding of our nation, voting has been considered one of the core responsibilities of citizenship. In 1781, Samuel Adams — the “Father of the American Revolution” and signer of the Declaration of Independence — said this about voting:

Let each citizen remember at the moment he is offering his vote that he is not making a present or a compliment to please an individual — or at least that he ought not so to do; but that he is executing one of the most solemn trusts in human society for which he is accountable to God and his country.

Heavenly Father, thank You for the opportunity and freedom to vote. What an honor! I pray that You would guide and direct my every decision as I stand in the voting booth. Help me to cast my vote for the person who stands for liberty, freedom, and respect for human life.

The preparations of the heart belong to man, but the answer of the tongue is from the Lord.

God will show us what is proper and right if we seek His advice.

In this complicated, less-than-ideal election year, it might be tempting to just throw our hands up and not even be a part of the voting process. Today’s the day to make your voice heard! Come share your thoughts on the privilege of voting in a democratic society today on our blog. We want to hear from you! ~ Devotionals Daily