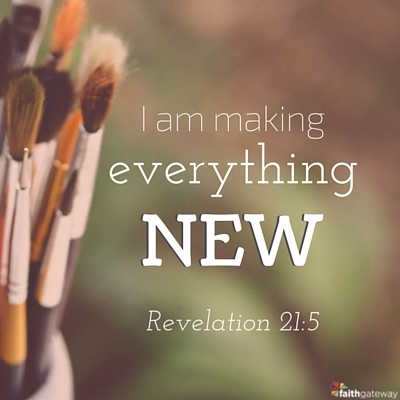 He who was seated on the throne said, ‘I am making everything new!’ — Revelation 21:5 NIV, emphasis mine

The Greek word John uses for new is kainos. Kainos is not the common word used in the New Testament for new, which is neos. Neos is when you take an old car and overhaul it and restore it. Or when you take an antique piece of furniture and refurbish it and say, “Just like new!”

Kainos represents something completely and comprehensively new, totally new, brand-new! And kainos is used in 2 Corinthians 5:17 where Paul wrote,

Therefore, if anyone is in Christ, the new creation has come: The old has gone, the new is here! — NIV, emphasis mine

He is describing you and me. The new creation has already begun. This is why theologians refer to God’s plan of redeeming all that is fallen in the universe as “the already and the not yet.”

The curse has been reversed, is being reversed, and will someday be reversed. We define this reality with a four-letter word known as hope.

In his book Surprised by Hope, N. T. Wright wrote, “Easter was when Hope in person surprised the whole world by coming forward from the future into the present.”1

The mission of the church is to bring the future into the present.

Every church is an ever-expanding outpost and colony of heaven. At the church where I serve, we want the architect of heaven to have to redesign the city to prepare for the number of people we plan on bringing with us!

You are God’s commercial, God’s cameo of what is and what is to come; you are the poster child of the already and the not yet.

Years ago, when Christians built a church, they would put the cemetery in the front yard. Every Sunday when they gathered, they were reminded that we have to walk through death to get to the new life.

One life at a time, we are bringing the future into the present. To return to N. T. Wright, he articulated it this way in his book Simply Christian:

“Resurrection” doesn’t mean “going to heaven when you die”… It is certainly not about keeping the commands of a distant deity. Rather, it is the new way of being human, the Jesus-shaped way of being human, the cross-and-resurrection way of life, the Spirit-led pathway. It is the way which anticipates, in the present, the full, rich, glad human existence, which will one day be ours when God makes all things new. Christian ethics is not a matter of discovering what’s going on in the world and getting in tune with it. It isn’t a matter of doing things to earn God’s favor. It is not about trying to obey dusty rulebooks from long ago or far away. It is about practicing, in the present, the tunes we shall sing in God’s new world.2

My good friend Garrett has endured thirty-seven surgeries in the last twenty years. Doctors have replaced everything they can replace that is broken. His body has deteriorated but hasn’t died. He is in constant pain, but at the same time, he is a constant source of joy for everyone he meets. He doesn’t feel sorry for himself. He doesn’t beg for sympathy. He knows his current body is not his permanent body. Someday God will give him a new body.

And that’s why instead of describing heaven as a place, John described it as a people. The place is the people.

In Revelation, John didn’t get caught up in describing the color of the wallpaper and carpet. John described heaven using the number twelve, which is used elsewhere in Revelation to describe the people of God. This new city will have twelve gates and twelve foundations. It will be 12,000 stadia, by 12,000 stadia, by 12,000 stadia in dimension. Everywhere you look at John’s description of the city, you see the number twelve, which means every time you see heaven, you see the people of God.

Even though my friend Garrett and so many other people who are struggling and suffering in this life want Jesus to come quickly, God continues to delay His return for a reason. And God’s reason for delaying the return of Jesus has something to do with wanting as many people to be ready for His return as possible.

The Lord is not slow in keeping His promise, as some understand slowness. Instead He is patient with you, not wanting anyone to perish, but everyone to come to repentance. — 2 Peter 3:9 NIV

Fifteen years ago I spoke at a funeral for a college cheerleader who was killed while driving under the influence of alcohol. He was the fifth college student from the same small town to die while drinking and driving.

I honored his parents’ wishes by talking about the good parts of his life, and I took the opportunity to kindly invite students to think about their choices and the consequences of their actions.

After that one funeral, dozens of students surrendered their lives to Jesus, and I’ve had the privilege of watching many of them grow up and become active members in our church family.

From the worst of situations, God sometimes does His best work. That was true of the cross, and it can be true of your life too.

I consider that our present sufferings are not worth comparing with the glory that will be revealed in us. — Romans 8:18 NIV

Paul was a man familiar with suffering. He had been shipwrecked, beaten, flogged, and stoned on more than one occasion.

So think about your deepest hurt, your greatest loss, the place in your heart that is most breakable and broken, and know that you can trust God right now. You can wake up tomorrow and trust His promise and know beyond a shadow of a doubt that it will be worth it in the end because He really will wipe every tear from your eyes.

Excerpted with permission from Me Too: The God Who Understands by Jon Weece, copyright Jon Weece.

How do you respond to N.T. Wright’s quote, “Easter was when Hope in person surprised the whole world by coming forward from the future into the present”? In this state of already but not yet we can know that no matter what difficulties and sufferings we face in this life, we have already transcended death, walked through the graveyard and become kainos because of our Savior Jesus Christ. Come join the conversation on our blog! We want to hear from you! ~ Devotionals Daily