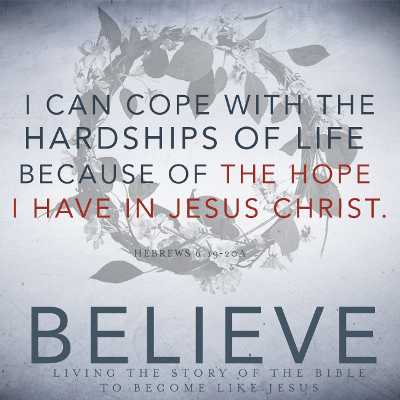 We have this hope as an anchor for the soul, firm and secure. It enters the inner sanctuary behind the curtain, where our forerunner, Jesus, has entered on our behalf. – Hebrews 6:19-20

The Effect of Hope

God and His promises are the reason for our hope. When we embrace this hope, it has a dramatic effect on our daily lives. Hope gives us the ability to get through our days, to persevere. Simeon waited many long years without seeing the fulfillment of his hope, but he carried on, letting hope give him strength for each new day.

Now there was a man in Jerusalem called Simeon, who was righteous and devout. He was waiting for the consolation of Israel, and the Holy Spirit was on him. It had been revealed to him by the Holy Spirit that he would not die before he had seen the Lord’s Messiah.

Moved by the Spirit, he went into the temple courts. When the parents brought in the child Jesus to do for Him what the custom of the Law required, Simeon took Him in his arms and praised God, saying:

“Sovereign Lord, as You have promised, You may now dismiss your servant in peace. For my eyes have seen Your salvation, which You have prepared in the sight of all nations: a light for revelation to the Gentiles, and the glory of Your people Israel.”

The child’s father and mother marveled at what was said about Him. Then Simeon blessed them and said to Mary, His mother: “This child is destined to cause the falling and rising of many in Israel, and to be a sign that will be spoken against, so that the thoughts of many hearts will be revealed. And a sword will pierce your own soul too.”  – Luke 2:25–35

Isaiah prophesied about the coming captivity of the people of Judah by the Babylonians. This portion of the book of Isaiah looks beyond that and assumes the 70 years of exile are almost over. Isaiah was able to encourage the people with confidence because he based his hope in God and his promise to bring the people home. The exiles could live full, happy lives because they knew God would keep his promise.

Comfort, comfort My people, says your God. Speak tenderly to Jerusalem, and proclaim to her that her hard service has been completed, that her sin has been paid for, that she has received from the Lord’s hand double for all her sins.

A voice of one calling: “In the wilderness prepare the way for the Lord; make straight in the desert a highway for our God. Every valley shall be raised up, every mountain and hill made low; the rough ground shall become level, the rugged places a plain. And the glory of the Lord will be revealed, and all people will see it together. For the mouth of the Lord has spoken.”

You who bring good news to Zion, go up on a high mountain. You who bring good news to Jerusalem, lift up your voice with a shout, lift it up, do not be afraid; say to the towns of Judah, “Here is your God!” See, the Sovereign Lord comes with power, and He rules with a mighty arm. See, His reward is with Him, and His recompense accompanies Him. He tends His flock like a shepherd: He gathers the lambs in His arms and carries them close to His heart; He gently leads those that have young.

Who has measured the waters in the hollow of His hand, or with the breadth of His hand marked off the heavens? Who has held the dust of the earth in a basket, or weighed the mountains on the scales and the hills in a balance? Who can fathom the Spirit of the Lord, or instruct the Lord as his counselor? Whom did the Lord consult to enlighten Him, and who taught Him the right way? Who was it that taught Him knowledge, or showed Him the path of understanding?

With whom, then, will you compare God? To what image will you liken Him? As for an idol, a metalworker casts it, and a goldsmith overlays it with gold and fashions silver chains for it. A person too poor to present such an offering selects wood that will not rot; they look for a skilled worker to set up an idol that will not topple.

Do you not know? Have you not heard? Has it not been told you from the beginning?

Have you not understood since the earth was founded? He sits enthroned above the circle of the earth, and its people are like grasshoppers.

He stretches out the heavens like a canopy, and spreads them out like a tent to live in.

He brings princes to naught and reduces the rulers of this world to nothing. No sooner are they planted, no sooner are they sown, no sooner do they take root in the ground, than He blows on them and they wither, and a whirlwind sweeps them away like chaff.

“To whom will you compare me? Or who is my equal?” says the Holy One. Lift up your eyes and look to the heavens: Who created all these? He who brings out the starry host one by one and calls forth each of them by name. Because of His great power and mighty strength, not one of them is missing.

Why do you complain, Jacob? Why do you say, Israel, “My way is hidden from the Lord; my cause is disregarded by my God”? Do you not know? Have you not heard? The Lord is the everlasting God, the Creator of the ends of the earth. He will not grow tired or weary, and His understanding no one can fathom. He gives strength to the weary and increases the power of the weak. Even youths grow tired and weary, and young men stumble and fall; but those who hope in the Lord will renew their strength. They will soar on wings like eagles; they will run and not grow weary, they will walk and not be faint. – Isaiah 40:1–31

About a century after Isaiah died, his prediction of the Babylonian captivity was fulfilled during the lifetime of the prophet Jeremiah. Jeremiah’s message to God’s people was similar to Isaiah’s: Although the people were captive, God’s promises could give them hope for their daily living. And he offers that same hope to Christians today.

This is the text of the letter that the prophet Jeremiah sent from Jerusalem to the surviving elders among the exiles and to the priests, the prophets and all the other people Nebuchadnezzar had carried into exile from Jerusalem to Babylon. (This was after King Jehoiachin and the queen mother, the court officials and the leaders of Judah and Jerusalem, the skilled workers and the artisans had gone into exile from Jerusalem.) He entrusted the letter to Elasah son of Shaphan and to Gemariah son of Hilkiah, whom Zedekiah king of Judah sent to King Nebuchadnezzar in Babylon. It said:

This is what the Lord Almighty, the God of Israel, says to all those I carried into exile from Jerusalem to Babylon: “Build houses and settle down; plant gardens and eat what they produce. Marry and have sons and daughters; find wives for your sons and give your daughters in marriage, so that they too may have sons and daughters. Increase in number there; do not decrease. Also, seek the peace and prosperity of the city to which I have carried you into exile. Pray to the Lord for it, because if it prospers, you too will prosper.”

Yes, this is what the Lord Almighty, the God of Israel, says: “Do not let the prophets and diviners among you deceive you. Do not listen to the dreams you encourage them to have. They are prophesying lies to you in my name. I have not sent them,” declares the Lord.

This is what the Lord says: “When seventy years are completed for Babylon,

I will come to you and fulfill my good promise to bring you back to this place. For I know the plans I have for you,” declares the Lord, “plans to prosper you and not to harm you, plans to give you hope and a future.” – Jeremiah 29:1–11

Excerpted with permission from Believe: Living the Story of the Bible to Become More Like Jesus by Randy Frazee, copyright Zondervan 2014.

Join the conversation about hope on our blog! We’d love to hear from you! ~ Devotionals Daily