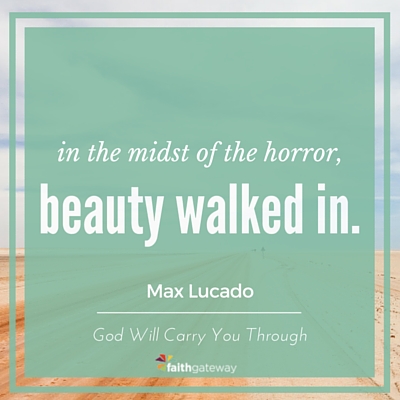 Two years out of West Point, Lieutenant Sam Brown was on his first tour of duty in Afghanistan when an improvised explosive device turned his Humvee into a Molotov cocktail. He doesn’t remember how he got out of the truck. He does remember rolling in the sand, slapping dirt on his burning face, running in circles, and finally dropping to his knees. He lifted flaming arms to the air and cried,

In Sam’s case the words were more than a desperate scream. He was a devoted believer in Jesus Christ. Sam was calling on his Savior to take him home. He assumed he would die. But death did not come. His gunner did. With bullets flying around them, he helped Sam reach cover. Crouching behind a wall, Sam realized that bits of his clothing were fusing into his skin. He ordered the private to rip his gloves off his burning flesh. The soldier hesitated, then pulled. With the glove came pieces of his hands. Brown winced at what was the first of thousands of moments of pain. When vehicles from another platoon reached them, they loaded the wounded soldier into a truck. Before Sam passed out, he caught a glimpse of his singed face in the mirror. He didn’t recognize himself. That was September 2008. By the time I met him three years later, he had undergone dozens of painful surgeries. Dead skin had been excised and healthy skin harvested and grafted. The pain chart didn’t have a number high enough to register the agony he felt.

Yet, in the midst of the horror, beauty walked in.

Dietitian Amy Larsen. Since Sam’s mouth had been reduced to the size of a coin, Amy monitored his nutrition intake. He remembers the first time he saw her. Dark hair, brown eyes. Nervous. Cute. More important, she didn’t flinch at the sight of him. After several weeks he gathered the courage to ask her out. They went to a rodeo. The following weekend they went to his friend’s wedding. During the three-hour drive Amy told Sam how she had noticed him months earlier when he was in ICU, covered with bandages, sedated with morphine, and attached to a breathing machine. When he regained consciousness, she stepped into his room to meet him. But there was a circle of family and doctors, so she turned and left. The two continued to see each other. Early in their relationship Sam brought up the name Jesus Christ. Amy was not a believer. Sam’s story stirred her heart for God. Sam talked to her about God’s mercy and led her to Christ. Soon thereafter they were married. And as I write these words, they are the parents of a seven-month-old boy. Sam directs a program to aid wounded soldiers. Far be it from me to minimize the horror of a man on fire in the Afghan desert. And who can imagine the torture of repeated surgery and rehab? The emotional stress has taken its toll on their marriage at times. Yet Sam and Amy have come to believe this:

Are there any gods like You, Lord? There are no gods like You. You are wonderfully holy, amazingly powerful, a worker of miracles. * Lord, there is no god like You and no works like Yours. * God’s strong foundation continues to stand. These words are written on the seal: “The Lord knows those who belong to him.” * With God’s power working in us, God can do much, much more than anything we can ask or imagine. To Him be glory in the church and in Christ Jesus for all time, forever and ever. – Exodus 15:11; Psalm 86:8; 2 Timothy 2:19; Ephesians 3:20-21

Excerpted with permission from God Will Carry You Through by Max Lucado, copyright Thomas Nelson, 2013.

Have you ever been in the middle of horrible circumstances and had beauty walk in? We’d love to hear your story! Come join the conversation on our blog! ~ Devotionals Daily