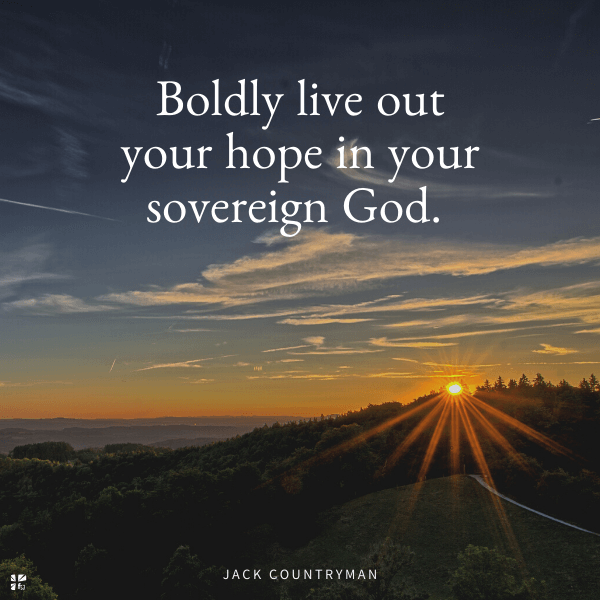 Esther was taken to King Ahasuerus, into his royal palace, in the tenth month, which is the month of Tebeth, in the seventh year of his reign. The king loved Esther more than all the other women, and she obtained grace and favor in his sight more than all the virgins; so he set the royal crown upon her head and made her queen. — Esther 2:16-17

It was, for instance, His sovereign hand that placed Esther on the throne in Persia, a position that gave Esther an opportunity to live out in a bold way the strength she found when she placed her hope in God. Queen Esther risked her life by going — uninvited — before the king to arrange a time when she could ask him to prevent the genocide of her Jewish people. God showed her grace and favor when He prompted the king to show her grace and favor. And as He did for Esther, God will do for you whenever you boldly live out your hope in your sovereign God.

As Gideon hid in a winepress to thresh his wheat — so his Midianite enemies wouldn’t steal it — God called Gideon to destroy the altar of Baal and then to save Israel from the Midianites. Similar to reluctant Moses, Gideon said, “O my Lord, how can I save Israel?” (Judges 6:15). Clearly Gideon’s doubts outweighed whatever hope he had in the Almighty. Hence the fleece.

God agreed to Gideon’s test and delivered — twice! Whether from a lack of trust in God, a lack of courage, or both, Gideon clearly didn’t want to lead Israel against the Midianites and Amalekites. But when he did, he saw that God was true to His promise “I will be with you” (Judges 6:16).

The Lord may have a big assignment for you just as He had for Gideon. Know that stepping out — with God — to do battle will strengthen your faith and grow your hope.

A PRAYER OF HEARTFELT HOPE

She had undoubtedly watched relatives and friends have babies. Her husband’s other wife had several sons and daughters — and lorded them over her barren rival. Oh, how Hannah longed for a baby of her own. During one of the family’s annual trips to the tabernacle, Hannah prayed to the Lord. Overcome by great anguish and that profound heartache she had known for far too long, she once again asked almighty God for a son. Out of profound gratitude should God give her a child, Hannah vowed to give him to the Lord. Her beloved son would live, work, and learn in the tabernacle. Nine months later, Hannah bore a son — named Samuel — who grew up to be a prophet and judge over all of Israel.

Our gracious God granted Hannah the son she had prayed for with heartfelt hope and trust in the Lord. May we learn from her example.

Hope in the Lord! No matter what your circumstances are, no matter how frightful or desperate, put your hope in Him. Learn from the examples God has given us in His Word from our early brothers and sisters in the Family and trust Him! Come share your thoughts with us. We want to hear from you about hope. ~ Devotionals Daily