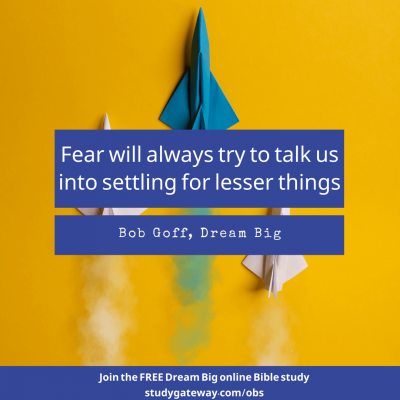 Figure out what’s holding you back.

It was September 1973 in Stockholm, Sweden. A convicted felon left prison after serving a portion of his sentence. Think of it like probation. He was getting a second chance at life, a chance to prove he could reenter society and do it right this time. It didn’t work. Soon after he was released, he headed to a bank to rob it and took four hostages when it went wrong. There was a five-day standoff before the Swedish authorities filled the bank with tear gas to flush him out.

When the robber was brought to trial, the four hostages were obviously the key witnesses. Surprisingly, following the trauma of the experience, the four hostages refused to say anything negative about the person who had held them captive for almost a week. This led to what we now call “Stockholm syndrome.” Maybe you’ve heard of it. It’s a name given to the inexplicable psychological phenomenon where a person develops affection for the person causing their affliction. Simply put, they developed a weirdly codependent relationship with their captor.

It doesn’t just happen in bank robberies, though. Think about it. Who do you know who can’t break the cycle of bad relationships? Do you know someone who goes through predictable cycles of addiction and can’t seem to break free? What about the person obsessively checking their phone for work emails while they are supposed to be on vacation? That last one is seemingly more benign than the others, but it’s not.

Many of us are clinging with affection to the very things that are holding us hostage. You know I’m talking about you right now, right?

It could be anything. A routine, a relationship, a job, a deeply held belief caused by a childhood wound. It might even be fair to say that we’re all being held hostage by something to some degree. Some of the most important work you will do is to identify who or what has been keeping you captive and to break free. We can’t fix what we don’t understand.

You can’t move forward with your new ambitions without sloughing off some of your old hang-ups, and we can’t simply walk away from these hang-ups without understanding them first. Here’s something to consider: our current failures are often an echo of our past ones.

As we come to understand these cycling behaviors, we get the clues we need to figure out what’s underneath the surface and holding us back.

Here’s the good news: you can turn whatever has been holding you hostage into a path toward freedom by understanding what that is and then breaking your relationship with it.

If you want to accomplish your ambitions, you’re going to have to learn some Houdini-level escape tricks. To do this you will have to clear the path of anything standing in the way.

We need to figure out what limiting beliefs we have developed that have us convinced that our ambitions are not available to us. These limiting beliefs come in all shapes and sizes for us. But they have one unifying characteristic — they hold us back. I have them and you have them. They are the invisible ghosts whispering that we’ll never make it, that we can’t accomplish our ambitions, that we missed our chance. I bet you’ve heard that voice in your head saying, You’re not smart enough or You’re not attractive enough or You don’t have the right gifts and talents to accomplish that or You missed your only chance. These ugly, untrue messages will flood our minds if we’re not on guard.

Where do these voices come from? My bet is that they didn’t originate with you. If you drill down on them, you’ll probably find they originated with a parent or a coach, a sibling or a pastor, a teacher or a bully, an old boyfriend or girlfriend. Or maybe the voice in your head is a mashup of some or all of these.

We have a drawer at our house where we keep a box full of keys. I don’t know what most of them unlock or where they came from. Like you, I didn’t want to lose the ability to possibly unlock something I had, so I kept them all, not understanding which locks the keys went with. I’ve wondered if there were little elves in the attic hiding more of them each night. I was going to set some traps that looked like locks and see if I could catch a couple. These keys are of zero use to us, yet still we keep them because we think we might need them someday.

That box of keys is like the hang-ups in our lives. They are habits and beliefs and patterns that may have served us at one point, but don’t any longer. Yet still we hang on to them thinking they might be useful later. This is how limiting beliefs operate. We don’t even remember how we got them. They are of no use to us, and they don’t unlock anything, but we’ve given them full access to our most deeply held beliefs.

We’ve all given more than a couple of keys away too. We’ve done a key exchange with people we don’t even know but listen to because they are loud or authoritative or convincing. We have allowed them in and treated them like guests when they are actually trespassers in our lives. We’ve given keys to some of our life choices too. There’s a swap happening with our careers and cars and bank accounts and retirement plans. The hard work comes when we start understanding our keys — the ones we’ve got, the ones we’ve given away, and the ones we don’t need anymore.

If you want to do some detective work on your life, look at your behaviors.

Are you bad at relationships? Maybe your parents got divorced so you started to believe your path would be the same. Did your parents stay up at night over a dimly lit kitchen table wondering how they could afford the electricity bill? Perhaps this is the origin of your worldview that the resources you need will be scarce. Do you remember playing musical chairs and you’re afraid you’ll be the one without a seat when the music stops? Maybe this is where your fear of rejection came from. Did you get made fun of for your freckles or get dumped by a prom date? These could be the return address of some of your insecurities.

Limiting beliefs can be anything, really, and they’re unique to each of us. If you want to clear the path to your ambitions, you’re going to have to stare down some monsters that have made their way into your closet or under your bed or into your life. You have to silence these old voices telling you lies about yesterday so the truth of today becomes a little bit more audible.

I guess what I’m saying is that none of us, literally not a single person, pursues their ambitions without having to face the moments in their past that have influenced their beliefs and deciding what they’ll do about them. The only question is whether you’ll stop, recognize that a limiting belief has grabbed the microphone in your life, understand what is happening, and tune out what isn’t true. If you don’t, there’s a chance you’ll let the lies you’ve believed in the past repeat themselves until the day you die.

Limiting beliefs can be multigenerational too. Have you ever stopped and said or done something and wondered, Where on earth did that come from? Because I’ve done some of the deep work throughout my life to identify and understand these, I know the well-worn paths to go find the starting point and bury it in the dirt. Let me give you an example.

I grew up in Northern California and liked to hike in the Sierra Nevada mountains with my dad. He has always been a bright and caring and cautious guy and would let me know about the dangers present as a way of expressing love to me. He would point to a log and tell me a cautionary tale about how rattlesnakes try to stay out of the sun by hiding under the logs. Evidently, the only way to not get bit was to stand on the top of the log then make a big leap out beyond where the snake could reach your ankles with its fangs. On its face, this seems like a good and fatherly instruction to give, and in one sense, it absolutely was. My dad wanted to help me stay safe. Because he loves me, he didn’t want me to get bit by rattlesnakes, or maybe he didn’t want to suck venom out of my calf if it happened. Either way, it came from a good and caring place.

I’ve been hiking in the Sierras for four decades, and do you know how many rattlesnakes I’ve seen? Zero. And that’s rounding up. Even so, do you know what I do every time I get to a log? I step on top and leap as far away as I can so I don’t get bit. I see a twig on the sidewalk downtown and a leap a foot or two in case a baby snake is under it.

My dad wasn’t trying to mess with my head. He was trying to be helpful. Still, the warning instilled itself in my young mind as a belief that rattlesnakes are under every log. The best way to overcome the belief like this isn’t to jump into a pit full of snakes; that’s just stupid. It’s to understand the belief and where it came from. If we don’t, we’ll be so busy not stepping on cracks or walking under ladders or breaking mirrors that we’ll never really start living our own authentic lives.

Like me with the log and the snake, our limiting beliefs usually take the shape of fear. This can manifest as procrastination, rationalizing, busyness, and a host of other subconscious tactics we employ to keep from chasing our ambitions. Whether the fear is rational or not, it feels real.

Fear boxes us in and will always try to talk us into settling for lesser things. If we let fear push us around, it won’t be long before we’re all fences and no horses.

Here’s a hard truth you need to understand as you pinpoint your fears: they will not go away by themselves. They’re more likely to multiply like rabbits in the dark. Listen up. Fears don’t really get fully conquered; they’re just understood and given less power. Be strong and courageous. Understand what fears are driving you. Are you willing to slay the dragon to move toward your ambition? Figure out your fears, kick them in the teeth, and get back to work. You’re not a hostage anymore.

What’s holding you back from going for your dreams? What’s keeping you from moving forward? Figure out what it is and kick it in the teeth! ~ Devotionals Daily