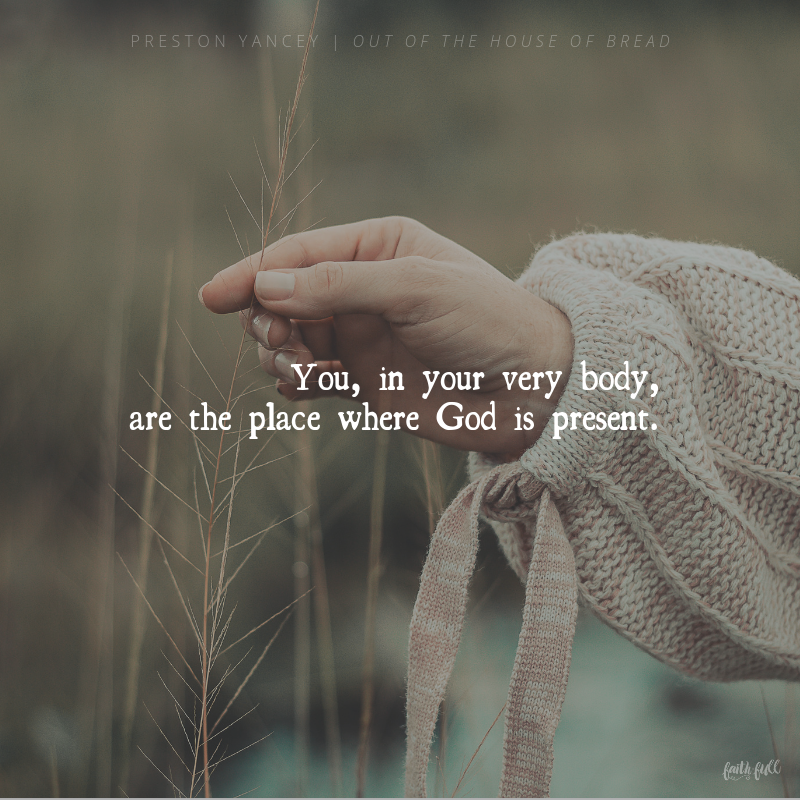 Editor’s note: Be sure to visit Preston Yancey at his blog to read an exquisitely raw and beautiful post about his journey of faith during the publishing of this book which happened to coincide with a severe crisis with his and Hilary’s son, Jackson. It’s no coincidence that Out of the House of Bread is an invitation to walk closer with God through spiritual disciplines as well as the homey, but so often tricky task of the baking of bread. Jesus called Himself “the Bread of Life” in John 6:35. And He invites us, just as He is doing so with Preston and Hilary, to enter into a conversation with Him that is as daily as our need for physical bread, especially during the seasons and trials of life that knock the wind out of us and challenge our most basic tenets of faith.

And the Word became flesh and dwelt among us, and we have seen His glory, glory as of the only Son from the Father, full of grace and truth.

The Word became flesh and dwelt among us. In the Greek, the word dwelt is more closely translated pitched His tent. He pitched His tent among us. When the Old Testament was translated into Greek for the LXX (1), the same phrasing was used to describe God’s dwelling within the tabernacle. It was in there God had pitched God’s tent among us, in our midst. Stretching across hundreds of years of stories and history, we find Jesus does not merely come and dwell with us. Jesus becomes flesh, becomes the ark of God’s presence once more, and tabernacles with us. God comes and makes a human body the place where we come to meet God.

No longer do we meet God in the tent of a tabernacle or the great stone structure of a temple. In the person of Jesus Christ God is right here, the ark walking around, in our midst.

You have heard this before, you have read it before, but linger a moment on the point. So often we rush to the cross, to the resurrection, and we miss the terrible and awesome moment that is the incarnation. The infinite God comes to dwell personally and finitely in our midst. God has hands, God has feet, but these hands and feet do not stretch across the sky like a cosmic Santa; these hands and feet pick up little children and hold them close, cover blind eyes with spit and mud and make them see, stretch deep across a tree, twist inward to hold a weeping sister.

God, very God, with us completely. But only for a little while. We know this story. Jesus will ascend into heaven. Jesus will no longer be with us in a physical sense. The God who is with us, who tabernacles with us, temples with us, is also taken back beyond our reach.

“So what?” Someone in the circle asks this earnestly. “We know this part: Jesus is gone; now we just wait around. What does any of this tabernacle and temple stuff have to do with that? We may as well be a people without a God.”

Pentecost is the answer to what would otherwise be a people without a God. At His ascension, Jesus promises He will send the Holy Spirit, who will give power and authority to all the disciples, men and women alike, who are present and who are yet to come. It’s a sobering declaration when we have spent so much time over the course of Scripture reading about the special people called by God to create the spaces where God would dwell, those who longed for the wisdom of God to come down to them and lead them, who have been with the Jesus who tabernacled among them. Now God says there is but one more thing.

I smile around the circle, “We’re coming right back to the beginning, right back to that image and likeness business. We know well what the image is, even though it is beyond us, but we know so little of the likeness, of becoming more and more like God. God has made a way, though.”

Pentecost is the linchpin, the thing on which this great cosmic mystery hinges. At Pentecost and ever since, every person who has called on the name of the Lord Jesus and is saved by Him is also given the Holy Spirit, alive and full within them. The Spirit comes and dwells. The presence of God dwells within us. We become tabernacles, the ark within us in a spiritual sense as the ark was in Mama Mary, who brought Jesus into the world. We too are bringing Jesus into the world. For this reason Paul poses his question in the first place, asking the Corinthians if they remember they were made temples of God.

Paul would have used the LXX as his Scripture because he was a Greek-speaking Jew. He would have been familiar with the words used to describe the tabernacle, what it would mean to be called wise-hearted, what was written in the Book of Wisdom. Knowing all this, is it any wonder Paul writes:

We preach Christ crucified, a stumbling block to Jews and folly to Gentiles, but to those who are called, both Jews and Greeks, Christ the power of God and the wisdom of God. — 1 Corinthians 1:23b-24

Christ, the power and wisdom of God. The wisdom of God. The pieces weave together, almond meal relenting into shape. By what power is Jesus within us? The Holy Spirit. And who is this Jesus? Very God, the wisdom of God. I’m reminded of the phrases of my evangelical youth. Are we not saying someone is a temple of the Holy Spirit when we say they have asked Jesus to live in their hearts? What’s more, if Jesus is the wisdom of God, then are we not also saying the person is wise-hearted? Are we not suggesting God has made a way for every person who calls on God’s name to become wise-hearted themselves? A people uniquely gifted and skilled to create and build the places in which God comes to dwell and rest with them? Wise-hearted is the descriptor used in the Old Testament for those who made places for God to dwell on the earth.

I look around the circle of people I sit with. “You and I, now — right now — are called wise-hearted. Jesus is within us, and we are all able to make places where God is glorified and made known in the world. Paul is saying you and I are the living, breathing, walking-around places where God’s presence dwells and is made known and we better start taking that seriously.” I turn and look to each: “You are a temple of the Holy Spirit. You are a tabernacle. You, in your very limbs, in your very body, are the place where God is present. The image. The likeness. God is not so far from each of us after all.”

If we are temples of the Holy Spirit, then the likeness of God in us is being ever-refined. Paul says as much to the Romans, about the Spirit in us praying in all the ways we forget or don’t know how to. Jesus in us is constantly polishing the darkened mirror of our souls that is to reflect his glory, a glory we share in with him. But we get tired and weary of the process, reach for tools to help along the way. This is when most of us pick up the next study guide or the next 90-day Bible-reading plan and make valiant attempts to do, do, do in order to feel something of holiness. There’s nothing wrong with those study guides, those reading plans, except when we leverage them as means to an end and not as expressions of a relationship we long to deepen. We are never finished with being a Christian, so the next new study, the next new trend, satisfies for a time and then there is more to want, to learn, to discover. This is a gift but it can be exhausting. This too is about the path. This too is about the baking of bread. The path and the baking of bread can teach us something about the long haul of faithfulness, the tireless work of the easy yolk of Jesus.

1. Jewish scholars together created the translation of the Scriptures into Greek called the Septuagint, often-abbreviated LXX, the Seventy, so-called for the number of scholars legend holds were a part of the translation. The LXX contains, in addition to the Old Testament, a handful of books we call the Apocrypha. The Apocrypha is not considered Scripture by Protestant believers but is a reflection of what faithful Jews were thinking about during the period of silence when God did not speak through prophets. Over the centuries, orthodox Christians have used the Apocrypha as they would any other text written by a saint in the church: as helpful for revealing truths about God but not the Truth of God on their own.

Excerpted with permission from Out of the House of Bread: Satisfying Your Hunger For God With The Spiritual Disciplines by Preston Yancey, copyright Preston Yancey.

Come share your thoughts with us on our blog about being a temple of the Holy Spirit, a tabernacle where God is present, His very image and likeness. We want to hear how the understanding that God is not so far from each of us after all affects your pursuit of Him! ~ Laurie McClure, Faith.Full