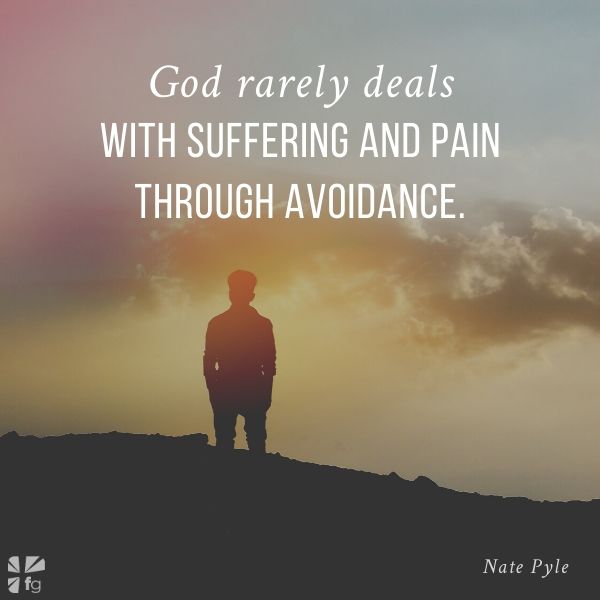 I wonder if Shadrach, Meshach, and Abednego thought they’d end up in the furnace.

Surely they didn’t think it unimaginable that King Nebuchadnezzar would toss them in the flames, but I wonder if they thought it would really come to that. In their speech to King Nebuchadnezzar, they claimed that God would deliver them from the furnace and the hand of the king. (Daniel 3:16–18) It seems they believed their unshakable faith would result in being spared from heat of the fire.

Sovereignty and omnipotence mean that God can save us from the furnace. He could have rescued Shadrach, Meshach, and Abednego before the fire surrounded them. He can put up a hedge around us, like He did for Job, that keeps calamity from our household. He can ensure that our jobs are never taken from us, our children never get sick, and our loved ones never die. God could rescue humanity from its sinful plight in some manner other than Jesus’ torturous death on the Cross.

God rarely deals with suffering and pain through avoidance.

I find myself wondering if something essential to being human would be lost if God completely eliminated suffering. I know that sounds insane. People far and near talk of the world as broken. Sermons and books remind us that the world is not as it should be. The brokenness of the world is not a point that people argue. The evidence is legion. But we rarely talk of the world as it should be outside of purely utopian terms. Peace, harmony, beauty, perfect, and shalom are tossed around as common descriptors of the world God originally created. This perfect state existed in the past but with the introduction of sin was lost.

Our hope is that it will one day be recovered. What should be — peace, harmony, beauty, perfection, shalom — is also in the future. It’s the day in which God will

wipe every tear from their eyes. There will be no more death or mourning or crying or pain, for the old order of things has passed away. — Revelation 21:4

I wonder if this pattern — the pattern of struggling through something to become — doesn’t go all the way back to Eden. With a little imagination, it isn’t hard to find some form of suffering or struggle. It’s interesting to note the word God used in the creation narrative: good. Not perfect. Good. It seems that even the unblemished paradise had the potential to become.

Adam, the first human according to the creation narrative, was set loose in the Garden and tasked with guarding the creation. From what, if not something against which he must struggle? Not only were there undefined threats; it seems entirely possible that Adam gained firsthand knowledge of what was “not good” about creation. Might Adam have understood loneliness? Loneliness is a recognition of incompleteness. It’s a lack of the presence of others. It is to suffer in the void of relationship. Adam struggled against what was not good in the Garden, and it’s through his suffering that he cries out in elation when he meets the bone of [his] bones and flesh of [his] flesh. (Genesis 2:23)

In the Garden, the man and the woman are faced with limitations. They do not have the knowledge of good and evil. There is a tree they cannot eat from. These limitations are the origins of temptation. Aware of their creaturely condition, the man and the woman begin to experience a kind of anxiety. Why shouldn’t we know good from evil? Why would God want to keep that from us? Why must we always be dependent on God? To be anxious is to suffer the onslaught of a thousand questions. I wonder if this kind of suffering existed in the Garden — in that place we so often picture as free of struggle?

From the beginning, creation was incomplete. There is a progressive unfolding to God’s world. As theologian Terence Fretheim writes, “This potential of becoming is built into the very structures of the world.”2 The world was good. Our struggle and work would make it better.

The symbolic presence of a certain kind of suffering in the garden unlocks a truth we’d rather overlook: to be human is to suffer. That was the design from the beginning.

More than that, suffering is a part of the authentic human life. Humans have never passively enjoyed the fruits of the world. We become active participants in our own lives when we wrestle against our limitations and withstand temptations. We drink deeply of relationships after knowing the drought of loneliness. We exhale in peace after the storm of anxiety. Life isn’t simply provided. We wring life from our experiences, while at the same time our experiences wring us out from our lives. We are becoming. And our experiences are a part of that process. Without our experiences, we would not be us.

Struggle is at the center of be-coming. Jacob becomes Israel through wrestling with the angel.3 Jesus becomes the exalted one through the struggle to be obedient at the cross.4 As Douglas John Hall notices, “Life without any kind of suffering would be no life at all; it would be a form of death. Life — the life of the spirit like the life of the body — depends in some mysterious way upon the struggle to be.”5

Let’s be clear. This isn’t some masochistic manifesto glorying in suffering. We shouldn’t orient our lives around seeking suffering and then rejoicing in it as if it is a blessing. Nor is this an argument in defense of every form of suffering. Sin’s destruction divorces suffering from the process of becoming. Sin is the gale-force winds of tohu wabohu rattling the created order, distorting what God intended. What was designed to make us wise, noble, and compassionate has been perverted and threatens to isolate us, consume us, and dehumanize us. To fulfill its design to aid in the process of be-coming, suffering must be redeemed. Any goodness derived from its suffering must come from something that transcends it and orders its chaotic elements into something beautiful.

After Eden, suffering isn’t innately redemptive. But our God is redeeming all things, even suffering. A day is coming when God will eliminate suffering and wipe every tear from every eye, but not yet. Until then, it seems that God won’t eliminate suffering. We can’t count on being saved from the furnace, but we can count on being saved as we endure the furnace. Suffering, even that which sin intended for evil, becomes something that God will use for good. This is the hope of redemption.

Excerpted with permission from More Than You Can Handle by Nate Pyle, copyright Nathan Pyle.

If you’re struggling, the good news is God, in His goodness and mercy and in His perfect plan, is making something new in you. You are be-coming a new creation through the suffering. And, being dependent upon God every single day is actually a beautiful place to be. Come share your thoughts on going through with Jesus on our blog. We want to hear from you! ~ Devotionals Daily