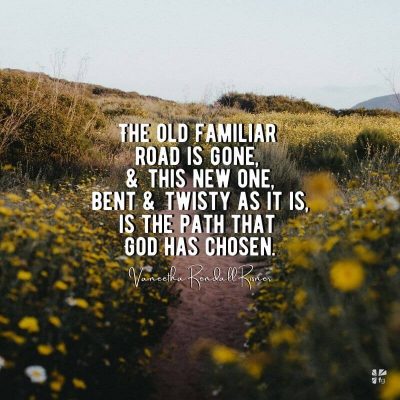 Life almost feels like we are in a holding pattern. We can’t make plans. We say to people, “Let’s get together when things go back to normal,” but we have no idea when that’s going to be.

So how do we live now?

How do we live in uncertainty?

This unsettling mixture of disappointment, anxiety, and questioning is strangely familiar. I remember the desperate longing to know what was going to happen in the future. That way, I could figure out how to live today. The two seemed inextricably linked.

Over a decade ago, my husband unexpectedly left our home. In an instant, all our lives were turned upside down. No one could believe it. Especially our family.

My husband said he didn’t know what he wanted. He had made some choices that he was still figuring out. Since I desperately wanted our family restored, I waited. I wanted something definitive before I made plans for the future.

I didn’t think it would be long.

Somewhere in the middle, as my husband and I were wrestling with our future, I realized this wasn’t healthy for me or for our adolescent daughters. I had put everything on hold. So through tears I asked the Lord,

“Where should I put my heart? How should I live now, in the midst of this uncertainty?”

The Lord answered through Jeremiah 29.

In the passage, God’s people are in exile. They don’t know how to live in this new place. They aren’t sure how long they’re going to be there and so they are putting their lives on hold waiting to see if and when they would go back to their homeland.

The prophet Jeremiah comes to them and promises that God has good plans for them. Plans to prosper them and not to harm them. Plans to give them a future and a hope. Plans to bring them back and to restore them. (Jeremiah 29:11-14).

Jeremiah also tells them not to put their lives on hold, waiting for that day. He tells them to make the best of life where they are. God tells Jeremiah to tell the exiles,

Build houses and live in them; plant gardens and eat their produce… Seek the welfare of the city where I sent you into exile and pray to the Lord on its behalf for in its welfare you will find your welfare. — Jeremiah 29:5-7

This was my answer. I had to figure out how to live today, as an exile, not knowing when life would feel certain again. I couldn’t put my life on hold any longer. I needed to live where I was. Not just bide my time, waiting for things to change.

It’s not just a detour

What I thought was just a detour had now become the new road. I had been waiting to get back to the familiar, hoping it was just around the corner. But the old road was gone. There would be new joys on this new road and new sorrows, and I had to trust God to direct me.

Leaving the old road meant huge losses. My husband and I divorced. The girls grew up in a broken home. We were all left with lingering abandonment issues.

Just as God told the exiles that He would bring them back, I believed that God would eventually restore my life. And He did. The girls’ faith in God became stronger when I feared it had been destroyed. We all learned the power of forgiveness. I remarried an amazing man named Joel who showed me that God can indeed restore the years the locust had eaten. (Joel 2:25).

Restoration is coming, but how do we live now?

Similarly, we can trust that God will restore our lives after the pandemic. Beauty will emerge from these ashes.

While our lives will never be the same again, we can trust God with the life in front of us.

But now, in the midst of the pandemic, God is calling us to live in the now.

Like the Israelites, we must figure out how to live into this exiled land. We need to let go of our expectations and lean hard into God. We have to keep our eyes on the Lord, trusting him to provide for all our needs.

The Israelites understood what that meant. Centuries before the exile, they lived day to day, being fed by manna and relying on the pillar of fire, God himself, to lead them. They couldn’t make plans then either – they had to live in complete reliance on God. They couldn’t use old familiar roads – they were going into uncharted territory.

God in the fire

The pillar of fire carried the presence of God Himself who was later in the fire with Shadrach, Meshach and Abednego, Jewish exiles, who emerged unafraid and unharmed after being thrown into the furnace.

During that excruciating time of uncertainty and waiting in my life, I felt like I was walking through fire. Yet just like the Israelites and Jewish exiles, I knew the Lord was with me and was guiding me. The Bible came alive to me and God met me through its pages. I leaned on Him for guidance because there was nothing else to lean on. He directed me when I didn’t know which way to turn. His presence never left me, even when I soaked the pillow with tears. And He strengthened and refined my faith in ways that have long outlasted that trial.

I would never have chosen those years of uncertainty for myself. I longed for stability, normalcy, predictability. But rather than giving me what I thought I needed, God gave me Himself, which was far more precious.

After that time, God put me on a new path. As He promised in Isaiah,

I will lead the blind in a way that they do not know, in paths that they have not known I will guide them. I will turn the darkness before them into light, the rough places into level ground. These are the things I do, and I do not forsake them. — Isaiah 42:16

God is putting us all on a new path. We don’t know where it’s taking us, but we can trust God to guide us.

The old familiar road is gone, and this new one, bent and twisty as it is, is the path that God has chosen. It is the best road for us, and God is taking us somewhere full of delight. And for now, as we travel, we can be assured that we are on the very road where God wants to meet us.

Written for Devotionals Daily by Vaneetha Rendall Risner, author of Walking Through Fire.

This last year has been like walking through fire for many of us. We’ve faced so many losses, shocks, and adjustments we could never have anticipated. It’s a new road for sure. Uncertain. Have you leaned upon the Lord through it? No matter what, let’s seek His guidance! ~ Devotionals Daily